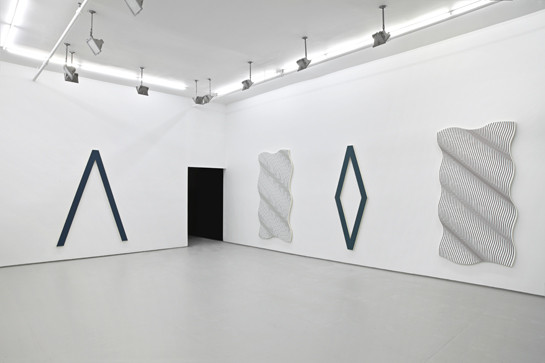 “The starting point for my installations and sculptures is often a two-dimensional work or a painting. I want to be able to distinguish a moiré from a tone-gradation, just as a flicker movie is not made with gray but with the optimal contrast between black and white. It’s a question of playing with the historical contradictions, terms, and issues raised by the work, more particularly when the latter map onto the formal issues that arise when transferring it from one medium to another.”1
– Philippe Decrauzat

“Jack Goldstein said: ‘Art is a trailer for the future.’ In the case of Philippe Decrauzat, is this a preview of the future perfect, marking what might have come to pass, returning to the sources of the present to better reveal what might befall us in the future, the wastelands that his oeuvres invite us to return to, upon which to rest our eye?”2
– Lionel Bovier


Elizabeth Dee is pleased to announce the second solo exhibition at the gallery by Philippe Decrauzat. Two new series of paintings are presented in tandem in the main gallery and his 16mm film, Screen-o-Scope is projected in the back room. A pair of new drawings are also on exhibit in the front room.


Primary concerns to Decrauzat’s practice are reiterated by the joint presentation of two painting series, Vertical Wave and Untitled (Fragment). Working in the context of the optical line, Decrauzat references graphs of force and duration (as in the graphic representation of cosmic phenomena) as well as art historical tendencies of radical painting. Vertical Wave describes an undulation as a crossing between two and three dimensions, real and perceived motion. Untitled (Fragment) is a continuation of Decrauzat’s polysemous mediation of the moiré pattern, specifically citing the cover illustration of a 1963 issue of The Scientific American depicting this effect. These “paintings” are isolated graphical forms drawn from the overall rhythmic whole given by the initial image. In conjunction, these two series interrupt the viewer’s anticipation of spatial linearity with the introducion of the diagonal. Decrauzat notes: “The installation is a display as a graphical sentence that ultimately makes a loop.”

Fluidly repurposing significant visual and historical references, Decrauzat expands on the meaning his sources have for new ways of seeing. The 16mm film, Screen-o-Scope, takes a moment from Akira Kurosawa’s Rashomon (1950) where flickering sunlight is partially obstructed by branches and foliage; a technical device Kurosawa employed to transition between scenes. Similar to his past appropriations from cinema (Alfred Hitchcock’s The Birds, Hans Richter’s Dreams That Money Can Buy) Decrauzat identifies this structural turn, extracts and interrogates it through a different presentation, implicating the viewer in the process. He reminds us that perception is not contingent on a knowledge of history but that there is always a historicity attached to perception.3


With Screen-o-Scope, Philippe Decrauzat evokes the history of experimental cinema, calling to mind the work of Tony Conrad, Brion Gysin, and the modernist polymath, Frederick Kiesler. Kiesler’s Film Guild Cinema, a moviehouse built in 1929 in Greenwich Village, featured a giant, iris-like apparatus which was responsive to the shifting visual qualities of the projected films, aspiring to a total engagement of the viewer’s attention. Decrauzat links these investigations, maintaining the original sources while interrogating them optically. If appropriation is the condition of our existence, then Decrauzat questions our attention to this condition.


Philippe Decrauzat (b. 1974) has exhibited in museums internationally. In the last five years, the artist has had solo exhibitions with: Le Plateau, Paris, Haus Konstruktiv, Zurich, Seccession, Vienna (catalog), Kunstverein, Bonn and Centre d’Art Contemporain, Geneva. Current and upcoming exhibitions include: The Old, the New, the Different, (curated by Fabrice Stroun), Kunsthalle, Bern and Lumineux Dynamique: Space and Vision in Art from 1913-2013 (curated by Serge Lemoine), Grand Palais, Paris (catalog). A monograph on the artist was published in 2007 with JRP | Ringier, Zurich.

1 Fronsacq, Julien. “A Conversation with Philippe Decrauzat.” Philippe Decrauzat, Zurich: JRP | Ringier, 2007.
2 Bovier, Lionel. “Formaloia.” –Shut and Open At the Same Time, Vienna: Secession, 2008.
3 “One thus finds the same relationship between perception and history with their interwoven nature – the historicism of perception, as well as the perception of history –” Ibid.
www.elizabethdee.com