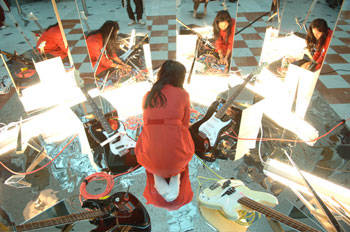 Elizabeth Dee Gallery is pleased to present Disassociate, a durational installation and series of performances by New Humans, a New York based minimal noise band and moniker for collaborative work by artist Mika Tajima with musicians, artists, and designers. For this exhibition, Tajima, with other founding member Howie Chen, will present two new installations that will also feature visual and performance collaborations throughout the duration of the exhibition. The exhibition will open on Saturday, February 17 and run through March 31, 2007. There will be an opening reception for the artists Saturday, February 17th from 6:00pm to 8:00pm.

Performances will be held on Saturday, February 24th at 8:00pm with Vito Acconci and Saturday, March 10th at 7:00pm with C. Spencer Yeh.

Disassociate consists of two installations that function as autonomous sculptures and structures for collaboration, performance, and disruption. In the main room, colorful silkscreen prints fashioned like moveable modular wall panels serve as sound barriers for performance. They will also be used as display structures for the presentation of collaborative visual works by Tajima, Vito Acconci, José León Cerrillo and Philippe Decrauzat. Over time, the panels will be spatially reconfigured and activated through layers of accumulated text and graphic compositions. The back gallery contains a perfectly ordered and precariously arranged assortment of emblematic objects referencing status, luxury and design. A large immaculate pyramid of champagne glasses will balance delicately alongside a top-heavy stack of modular Eames shell chairs. This constructed showroom scene is slated to become a site of destruction in a sound performance held midway through the exhibition.

Emanating throughout the entire gallery space will be an ongoing sound element recorded by Howie Chen. The sound piece features the anticipatory drone of a guitar amp just turned on, drawn out ad infinitum, and a popular song restructured into anonymous static noise. Together, the sounds resemble the crackling prelude heard on vinyl record recordings.

As it takes the shape of an evolving sound composition, the exhibition will be punctuated by two separate live performances. The first event pairs a reading by Vito Acconci with a New Humans performance of sine wave drones, feedback, and geometric beat patterns. Its ‘recording studio’ configuration of isolated and obstructed areas created by the graphic sound partitions recalls the setting of Jean-Luc Godard’s “Sympathy for the Devil,” which features The Rolling Stone’s recording sessions for their iconic anthem. The second event features a destruction performance by noise musician C. Spencer Yeh and New Humans during which the stacks of champagne glasses and shell chairs will be toppled and sampled over the course of an extreme noise set.

In its entirety and in its singularities, Disassociate underlines the potentialities, separations, and contradictions of collaboration in the process of mapping different creative practices. Repurposing bankrupt formalisms and recognizing the need to destroy and build at the same time, this durational exhibition points to the kinds of strategies and processes that can be used to create new articulations of form and sound through an antagonistic relationship to expectation, formalism, and style.

Formed in 2003 as an extension of Mika Tajima’s art practice, New Humans have performed for the Portland Institute of Contemporary Art at the TBA:06 Festival, Portland, OR; Center for Curatorial Studies, Bard College, NY for Uncertain States of America; El Museo Nacional Centro de Arte Reina Sofia, Madrid, Spain for Video Musica Video; and the Walker Art Center, Minneapolis, MN for its reopening in 2005.