Today I Made Nothing 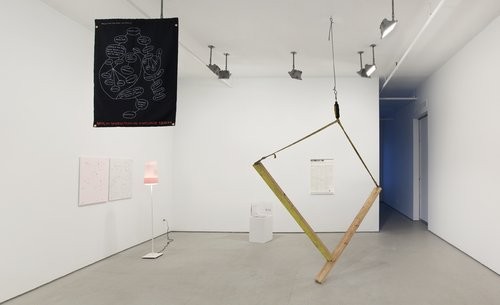 Today I Made Nothing
Installation view
TODAY I MADE NOTHING

While many people are going on vacation and galleries are wrapping up their summer shows, Elizabeth Dee Gallery is pleased to present Today I Made Nothing, a group exhibition that considers the relationship between work and leisure, non-productivity and the negation of work, in a contemporary context in which people are perpetually available and continually securing their economy. Taking its title from the work of the late Russian writer and poet Daniil Kharms, whose own brand of aesthetic refusal ran afoul of Stalin, the exhibition substitutes his proclamation’s verb, replacing writing with working.

From factory workers to the labor movement, the Art Workers’ Coalition to the proliferation of freelance professionals, artists’ practices continue to be associated with varying forms of labor. But even with the rise of immaterial labor and the expansion of the periods of time during which one is potentially working, the amount of time spent at work does not have a direct corollary with increased levels of production: working less can actually result in getting more done. With times of production and research (or conception), becoming increasingly indistinguishable, the culture worker is often working when it might appear otherwise, even when at a casual lunch meeting or exhibition opening. Given that this process can also be reversible, repeated, or reduced to a set of instructions, art practice can be further separated from the act of labor—perhaps even positioned in direct opposition to the very idea of work—as a kind of non-productivity that might best align itself with one aspect of art’s history: that of doing nothing.

Commencing chronologically with Harun Farocki’s "Workers Leaving the Factory”—a piece comprised of film excerpts spanning the entire history of cinema, each depicting people at the conclusion of their work day and leaving the site of their labor—the works in the exhibition employ a number of pre-existing or found materials, be they texts, films, art works, advertisements or office furniture. Tracing different lineages and histories of production, the works move to the gallery from the artist’s studio, factory, recording studio or publishing house, often combining these materials and negating their previous use-value so as to render them comically or absurdly dysfunctional, much as Kharms wrote stories that refused to function as traditional, linear narratives.

The question then is how do we take the models from the past and improve upon them, be they ones developed in the 1960s and presented by Robert Morris, Jean-Luc Godard or Herman Miller, or Guy Debord’s even earlier declaration “Ne travaillez jamais,” then echoed by the Italian Autonomists? By investigating the value of work and questioning what constitutes it today, can we develop ideas about how we might best replace the present post-Fordist neoliberal model with a better one, reclaiming both the governance of time as well as work itself?

Today I Made Nothing is an exhibition in two parts, the second installment opening at Front Desk Apparatus (www.frontdeskapparatus.com) in September. Additionally, the exhibition is accompanied by the first phase of The Library Project, presented at Elizabeth Dee by Front Desk Apparatus, an initiative that focuses on editorial creation, independent publications and the position of writing and design in contemporary practice. In a filing cabinet in the gallery’s office space, a selection of readings pertaining to the exhibition, aims to employ the office context as a framework that acknowledges, uncovers and excavates the library's potential to generate concrete possibilities in the form of "living" research and knowledge production.