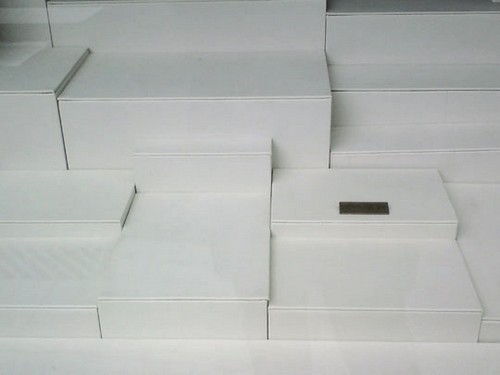 From the immensity of phenomena taking place around me, I draw one thing. I notice, for example, a cigarette butt on the floor (the rest of the objects on the floor slip into non-being).
If I can justify why I noticed the butt in particular ('I am looking for an ashtray to drop my cigarette ash'), everything is all right.
If I noticed the cigarette accidentally, without any intention, and I never return to this observation, everything is still as it should be.
If, however, having noticed this phenomenon without significance, you return to it for a second time ... woe! Why did you notice it again if it is without significance? Ah, so it means something to you after all, if you returned. ... Oh yes, by dint of the fact that you concentrated unjustifiably on this phenomenon one second longer, this thing already begins to stand out, becomes remarkable ...
-No, no (you deny), this is an ordinary cigarette!
-Ordinary? Why are you denying it if it is ordinary?*

gerlach en koop is a collective of two persons who gave up the habit of starting their proper names with a capital letter. They are known for minimal gestures -very minimal sometimes, that appear effortless, and elegant. For their first solo show at Ellen de Bruijne Projects they decided to leave their familiar surroundings in The Hague and live and work in Brussels for a while. They made long wandering walks from the outskirts to the center of the city. Brussels is not easy to understand and certainly not in three months time. They saw a boy walking down the Boulevard Anspachlaan, juggling with an orange in one hand and carefully turning round a curiously bent plastic straw with the fingers of his other hand, as if to structure his unstructured and confusing impressions of the city, like a clock, like a timekeeper. And they identified with this boy.
There was a sweet mechanical voice that guided their travels in the metro: -Correspon dance ... Aansluiting ... French and Dutch. They repeated after her: -Correspondance, aansluiting, correspondance aansluiting, until it became one word, and added, one to the other, murmuring under their breath:
-Aansluiting, afsluiting.
-Opsluiting. Insluiting.
-Eh, ontsluiting.
-Uitsluiting, buitensluiting.
-Ritssluiting?
-Kortsluiting.**
It is not the connection to some deep truth hidden underneath the surface that an object will appear as meaningful, no, it's the way it is organized, repeated or shifted in relation to other things on the surface.

* From the one hundred and sixty-three words, written down by Witold Gombrowicz in his diary in 1963, nine were changed and five were added by gerlach en koop in 2010, which is a bureaucratic way of saying: an ashtray was removed.
** Connection, disconnection. Confinement. Enclosure. Eh, opening up. Exception, exclusion. Zipper? Short-Circuit.
www.edbprojects.nl