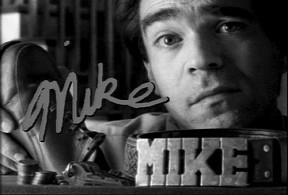 Michael Smith (Chicago, 1951) has an impressive exhibition and performance history that began in the mid 1970s. He attended the Whitney Museum Independent Study Program in 1970 and 1973 and graduated from Colorado College in 1973 with a degree in painting. Soon after graduation he became intrigued by Vito Acconci's performance art, William Wegman's videos and the theater of Richard Foreman. Smith is best known for his performances, installations, drawings and videos, but his artistic career also includes puppet shows, commercial and cable television skits, stand up comedy and comic publications. Intertwining the worlds of art, American entertainment and the everyday, Smith uses humour to articulate and emphasize the banality and hype of mass consumer culture. Taking visual elements from American television formats such as music videos, commercial advertisements, sitcoms and game shows, Smith's videos and performances take place in a slowed down world, once-removed from reality, which in turn, accentuates his deliberate slow timing and exaggerated mannerisms. Over the years he has focused on two alter-egos, the most emblematic one being the modern day everyman, Mike. Smith uses the deceptive innocence of this persona to comment on the impact of media and rapidly changing technology on everyday life, and the isolation of those whose lives are shaped by it.

Ellen de Bruijne Projects will exhibit an overview of various video’s, photographs, audio files, drawings, and never before seen work spanning a period of more than 30 years. At the opening on 16 January Michael Smith will give a live performance to introduce his exhibition. The video’s that will be shown include Down in the Rec Room, 1979-81; Secret Horror (in collaboration with Mark Fischer), 1980; Mike Builds a Shelter (in collaboration with Mark Fischer), 1985; Mike, 1987 and Portal Excursion, 2006.
In addition videos of several early performances will be shown to give a more detailed insight into the development of Smiths performances and different alter egos. These videos include Busman's Holiday, Let’s See what is in the Refrigerator, and different versions of Down in the Rec Room. The drawings and photographs that will be displayed have a supporting character to the performances and videos in different ways. Apart from their own intrinsic qualities they reveal part of Smith’s creative process and give the viewer the opportunity to see the connections between the different exhibited works.
Smith exhibited and performed worldwide at museums, galleries, universities, festivals, nightclubs, on TV and in the streets. In New York City, he had solo shows and screenings at The New Museum, The Whitney Museum, Christine Burgin Gallery and MOMA. Internationally, he had solo exhibitions at Le Magasin in Grenoble, Objectif in Antwerp, Galleria Emi Fontana in Milan and Hales Gallery in London. In 2007-08, his retrospective 'Mike's World' was exhibited at the Blanton Museum of Art in Austin, Texas and at the ICA in Philadelphia. Smith’s works were included in the 2008 Whitney Biennial and in the Metropolitan Museum of Art 2009 exhibition 'The Pictures Generation: 1974-1984'. The Sculpture Center in New York recently presented A Voyage of Growth and Discovery, a collaborative video installation by artists Mike Kelley and Michael Smith, including a six-channel video featuring Michael Smith's other well known alter ego Baby IKKI. Smith is the recipient of numerous awards, including a Louis Comfort Tiffany Foundation fellowship, a Guggenheim and National Endowment for the Arts fellowships. Smith lives in Brooklyn and in Austin, where he teaches at the University of Texas.

At the opening on 16 January LIVE PERFORMANCE by Michael Smith at 17.30h
www.edbprojects.nl