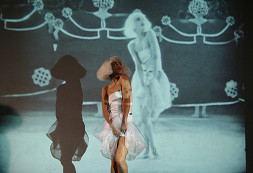 
Artists Pauline Boudry (1972) and Renate Lorenz (1963) often draw inspiration from archives of historical (portrait) photography and historical films. An important focus in their work is the history of sex and gender discourses and practices, as well as the meaning of ‘visibility’ since early modernity.

The 2009 work Salomania, consisting of an installation with HD film, documentation and palm trees reconstructs the dance of the seven veils from Alla Nazimova’s Salom. Artist, performer and gender activist Wu Ingrid Tsang (1982), and choreographer and filmmaker Yvonne Rainer (1934) are the performers in the film. The original movie from 1923 was directed by Charles Bryant, and was a film adaptation of the Oscar Wilde play with the same name. The silent movie was produced by openly gay actrice Alla Nazimova who also starred in it, whilst being Bryants (beard)wife at the time. The script follows the Biblical story of the Jewish princess Salome, who in Christian traditions is depicted as an icon of dangerous female seductiveness. King Herod desires his youthful stepdaughter Salome, while she in turn is more interested in the missionary Jokanaan (the Baptist), who rejects her. She therefore gives in to Herods desire to see her dance, but demands the head of Jokanaan on a platter as her reward. She kisses the severed head when it is brought to her.

At the beginning of the 20th century, there was a wave of excitement surrounding the character of Salome, which would later be referred to as Salomania. This popularity was instigated by a play about this biblical character written by Oscar Wilde in 1894. Women got together and imitated the exotic and liberating dance of the seven veils. Several dancers became famous for their specific interpretations of Salome. The figure stood for entrepreneurial independence and sexual freedom and therefore became an icon of sodomite subjectivity.

The installation Salomania takes up motifs from the silent movie, such as gazes, the active desire of Salome, and the figure of the veil, but also elements of Art Deco, which the movie celebrates in the costumes and the backdrops, like palm trees made out of ostrich feathers. Images of farness and of the technological can be seen as part of colonial politics, at the same time they seem to have been transformed by the film Salom. Here they are established as images that make space for female or transvestic fantasies and desires. A space between the genders and between Orient and Occident appeared to be possible. A documentation on different performers of the dance of Salome at the turn of the 20th century proposes a sort of archaeology in the history of queer performance and modern dance.

Also shown and rehearsed in the video by Boudry and Lorenz are sections from Valdas Solo, which the choreographer and filmmaker Yvonne Rainer created in 1972 after having seen Nazimova's film. The installation takes up Salome as a transgender figure and the motif of a queer appropriation of the exotic.
www.edbprojects.nl