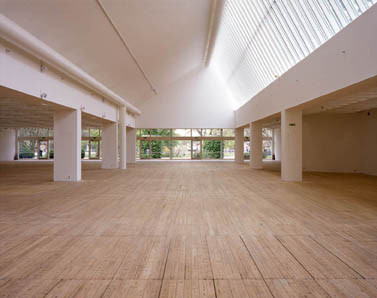 © Susan Philipsz
Stay With Me, 2005
SUSAN PHILIPSZ
"The Two Sisters"

The Two Sisters is specially made for Ellen de Bruijne Projects, and consists of a two channel sound installation with voice and a part with surround sound with violins in two rooms.

The story of The Two Sisters, touches on themes of repetition, loss and memory.

The ballad The Wind and the Rain has been around for hundreds of years and it is still sung today. It has its origins in Scotland and Ireland and was published as The Twa Sisters in Jamieson's Popular Ballads in 1656.
The song has many versions but its essence remains the same. The story is one of sororicide, where one sister drowns the other in a jealous rage.
The river carries her drowned body until a fiddler comes across her remains. Her bones and hair are fashioned into a fiddle but the fiddle can only play one song, The Wind and the Rain. In some extended versions of the song the fiddle incriminates the first sister; accusing her by reperforming the ballad.

The Two Sisters sound installation will play two versions of the song from two seperate speakers simultaneously. While one version is sung in the third person the second version is sung in the first person, as if taking on the figure of the drowned sister. The two voices overlap doubling the song in the space. The second and fourth lines of each verse are identical so while the different versions merge and get lost in each other they come back together at the refrain. The song is accompanied by a violin piece as a surround installation. The notes of the violin are taken from the song, and function as an ongoing echo. After the songs are finished there is a short silence and the work begins again.

Susan Philipsz was born in Glasgow 1965, studied Fine Art at Duncan of Jordanstone, Dundee and completed her MA in Fine Art in Belfast. She now lives and works in Berlin. She was awarded the PS1 International studio programme in New York (2000), the Kunst-Werke residency in Berlin (2002) and the International Artist Programme at Art Pace, San Antonio (2003). She participated in Manifesta 3, Ljubljana (2000), The Turin Triennale (2005), Berlin Biennale (2005), Skulptur Projekte Münster (2007), Carnegie International and Sydney Biennial (2008). In 2009 she had shows at Walker Art Center (Minneapolis), the Hirschhorn Museum (Washington DC) and MMA Oxford, the latter of which is still running. Aside from EdBPROJECTS, Susan Philipsz is represented by Isabella Bortolozzi, Berlin and Tanya Bonakdar, New York. Next year she is preparing a project for the Guggenheim Museum New York, and Glasgow International 2010 o/a.