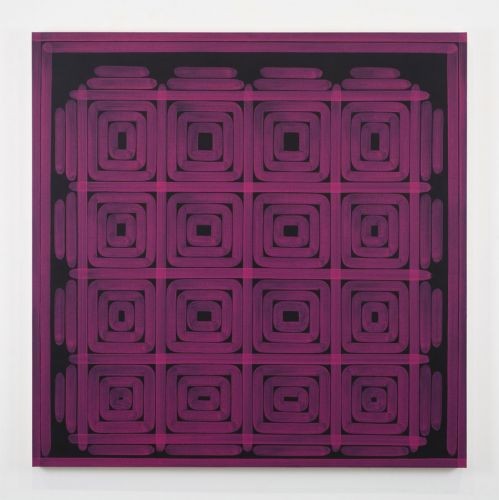 Galería Elvira González will present its second exhibition of US artist Dan Walsh on Thursday, 11 April, at 7 pm.

The exhibition will include nine large canvases, dating from 2009 to 2012, in which the artist continues to display his signature compositional style that is rooted in Minimalism but tempered by freer and more personalized elements and gestures. In Walsh’s paintings the linear and undulating design of the colour strokes, displayed as bars or labyrinths, produce a visual play of vibration and movement that causes the viewer’s gaze to go in and out of focus.

Dan Walsh belongs to the post minimalist artistic generation, and his work is based on repeating forms that play with progressive complication or simplification. Walsh brings an architectural sensibility to his treatment of the space and background of his paintings, often treating them as if they were architectural friezes. His main references can be found in works from artists such as Peter Halley, Donald Judd, Sol Lewitt and Philip Guston, while his use of repetitive prints laid out in hierarchical compositions is indebeted to sources as diverse as Tibetan mandalas, indigenous textiles and folk art.

For Walsh, the creative process is fascinating and it is in fact as important as the final result of the work. It is this same process which generates the images of his paintings and which, as he himself acknowledges, provides unexpected results. He knows perfectly well how his work will start but he does not know how and when it will end, so that the final result is unknown. Walsh himself states that his painting is a vehicle to contemplate a place where the retinal meets the symbolic.

Dan Walsh (Philadelphia, US, 1960) studied at the Philadelphia College of Art and at the Hunter College in New York, where he currently lives and works. Hiswork has been exhibited at the P.S.1 Contemporary Art Center in Long Island, the New Museum of Contemporary Art in New York (US), the Centre National d'Art Contemporain in Nice,the Denme Synagogue (France), the CCNOA (Art + Architecture) Centre in Brussels (Belgium) and the Kunstverein Medienturm in Graz (Austria). In addition, Walsh has made numerous artist ́s books that have been exhibited at the Gabinet des Estampes at the Musée d’Art et d’Histoire in Geneva (Switzerland).

His work has been included at the Biennial in Ljubljana (Slovenia) and the Biennial in Lyon (France). Between 17 March and 26 May 2013, the artist will have a retrospective exhibition at the Fondation Speestra in Apples (Switzerland), under the title of Table of contents
www.galeriaelviragonzalez.com