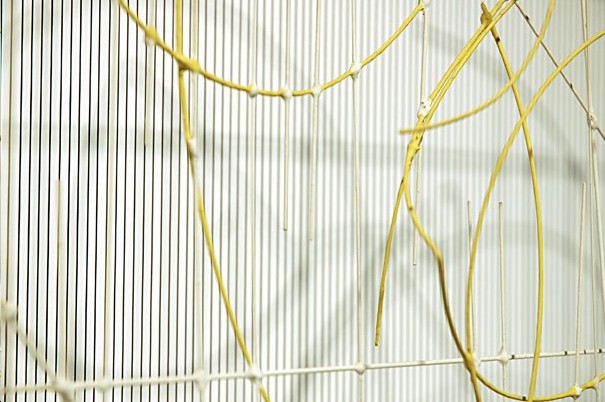 The Elvira González Gallery continues the season with a one man exhibition, the venezuelan artist Jesús Rafael Soto (Venezuela, 1923 – France 2005), founder and member of the cinetic movement.
On the first works he created in Venezuela it is shown the influence of Paul Cézanne and his interest in geometric forms on landscapes (Paisaje de Maracaibo, 1949), still lifes and portraits (La dama griega, 1949). After his trip to Paris on 1950, his work evolves to a geometric abstraction, after getting in touch with the avant-garde and studying the work of Malevitch and Mondrian. On these two artist he discovered what he would call the “fourth dimension”: the dynamics. From this moment on his interest in movement and the third dimension became a principal element on his work. He will reflect this firstly on his works of virtual cinetism and later on his “Penetrables”, where he integrates the viewer on his work (Penetrable amarillo, 1969), making him an active subject
On 1955 together with Agam, Tinguely y Pol Bury J. R. Soto formulates the basis of cinetic movement. This movement is characterized by the sistematic and repetitive use of simple and geometric forms, plane colors and interlacing lines to recreate movement sensation. Soto wants the elements used in his creations to lose their solid nature so to reach a state of transitory vibrations
On his firsts works from the fifty ́s he conceives the space as an artistic material, adding abandonned components to his work that he combines/ with geometric nets. Is by the end of this decade when he creates the first “vibrant” works in which thin metal sticks hang from nylon threads in front of a backround, sometimes also striped. The cinetic sensation is produced by the combination of the natural movement from the metal stick with the audience’s own around the work.
The exhibition comprises nine works dated between 1977 (Dos bandas blancas) and 2001 (Escritura azul).
His work can also be found in numerous museums from all over the world as the London Tate Gallery, Centre Georges Pompidou of París, el Museo Nacional Centro de Arte Reina Sofía, of Madrid, Museum of Modern Art in Nueva York, the Managua Museo de Arte Latino Americano Contemporáneo, Museum of Modern Art in Seúl, Museum of Modern Art in Wakayama ... . In 1973 the venezuelan governement created the Museum of Modern Art Jesús Soto Foundation.
www.galeriaelviragonzalez.com