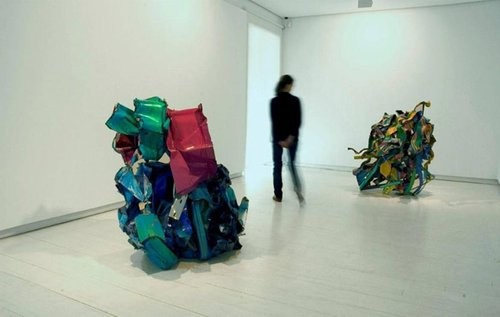 On May 7th. the Elvira González Gallery opened the first one-man show of the North American artist John Chamberlain (Rochester, Indiana 1927) which contains four large works produced between 1989 and 2006.

John Chamberlain never thought of becoming a sculptor. In the middle of the great depression his childhood was lonely and hard. From Rochester to Chicago, from Chicago to Rochester. He never had a clear vocation and he dropped out of school at an early age. When he turned sixteen he joined the US Navy. When he was licensed he went back to California but soon moved again to Chicago where he studied hairdressing until the beginning of 1950. He then started to attend the Art Institute of Chicago where he stayed for a few years.

In 1955 he attended Black Mountain College, and, as he says, this was the first time that he started finding an interest in something, which led him to begin his artistic career. He started reading: Ezra Pound, D. H. Lawrence, William Carlos Williams, Dashiell Hammett, Raymond Chandler... and he began to define the concept he will later have of what Art is. To John Chamberlain Art is a peculiar madness in which you use other means of communication ... to say something that they [people] haven’t yet heard, or haven’t perceived, or had repressed.

John Chamberlain uses pieces of car chassis’ from scrap yards. He collects pieces that he then manipulates by crushing, bending and twisting until creating a harmonic group. At the end of the sixties he begun to experiment with other materials since he was tired of having people see only car crashes in his sculptures, which were erroneously interpreted as his vision of society. He produced instant sculptures with foam that he cuts and bends until he finds the right form. He also begins to use galvanized steel, painted steel, plexiglas ...
His sculptures can be seen from every point of view. The viewer can surround them and slowly discover a new form, a new color or a new emotion with each step he takes. John Chamberlain doesn’t pretend to be sending us a message, he is just discovering a new space to us.

This is John Chamberlain’s first one-man show at Galeria Elvira González and will be on from May 7th to June 30th.