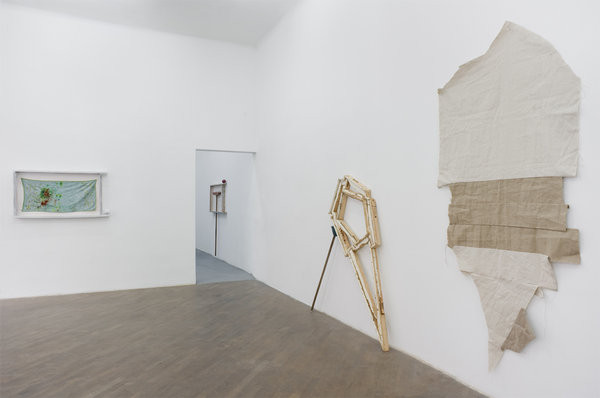 On the ground you will stumble.(1)
A world not shared is not a world. Art is a generous activity. Fully understanding the ambition of this activity requires patience, and a sense of the need to disrupt knowledge and prejudice. It also takes time to perceive how Franz Amann manages to produce an image - at times an image of his determination and tenacity itself – which seems to include his desire to offer and share his world. He is once again constructing the life of an image-maker, inventing himself anew as a painter, while never obscuring the finite, profane and simple joy of such an activity. His work raises the need to again bring the concept of truth closer to the enterprise of the arts. If it were up to me, I would attribute to him the founding of a realism of a shattering order.

There is an anecdote about an old lady who contradicts a scientist: in her version, the world is flat and carried by a turtle. Her convincing answer to the objection that the turtle must also have a base: It’s turtles all the way down.(2)

At the peak of his work Franz Amann is a painter. With the astuteness of his sensations he organizes a relatively flat world (painting). But he always includes the apparently endless number of supporting aspects and strengths of such a world (recently wonderfully arranged fragments of a studio-life). As a realist he reveals the constructs that guide any understanding of reality. He elaborates on art’s great potential to show that any reality is a result of these constructed understandings: by striving for the probability of reality in the results of his efforts - his work.(3) I feel like stressing the image of the column of turtles supporting each other, as I was guided by the artist along fragments and events to a finally convincing whole: It ́s Amanns all the way down!

To write is to struggle with the sense of wrongness in any image. Climbing down a column of work... is wrong for its naive notion of space. We could suggest that Amann’s truth is targeting any “wrongness” of imagined and constructed realities (jene Irre, in die die Worte uns gerne führen). He doesn’t judge. His canvases are seldom rectangular or square. They are almost bursting, struggling for a wholeness as images, fighting to not be reduced to the symbolic. Tears. Stars. Cats. In moments of reduced expenditure: a towel. A broom. These constellations are hybrids and bastards. And then there is paint. With paint, I would suggest, Amann is manipulating - in a rather economical manner - his own solutions. We not only feel but also understand there is a hand at work, but even more a knowing eye, and what else? This happens to present a deeper understanding that make ​​us smile: yes, these brushstrokes are made with intention ... ah, painters actually paint. Still we shouldn’t be triumphantly certain to have revealed all the intention of this (flat?) world. We should not miss that evocation and opacity are also celebrated here. It is necessary to write: these images also “happen” outside their frames, in emptiness, in in-between-spaces (the fabric of a world sometimes stripped bare). Pedestals indicate an act of taming,(4) a process of cultivation. Or better: these images are in between falling and rising, they float. So they stay connected with the body, and also with space (the studio, the city, etc.). Amann shows us manifestations of the restlessness and decisiveness of a person capable of expressing the mood and time of the world.

We live on shaky ground, under an empty sky. Surprisingly, here we are still shown a beautiful world. Amann also paints by walking and talking. He knows the cruelty of things, their malice, but also their gratitude. As an artist he can bring things to life, make them talk.(5) We can read the stars, we can read the inner organs of bodies. We can read the dancer’s moves. Amann doesn’t work spontaneously; he shows the beauty and fragility of the learned and considered. He is also the one making the rope, not just dancing upon it. A column of dancing turtles? No. A feeling for the nobility of the simple life removed from the weight of the world. Nijinski had the answer to the question if it is difficult to float:

No, no. Not difficult. You just jump up high and wait a little bit.(6)