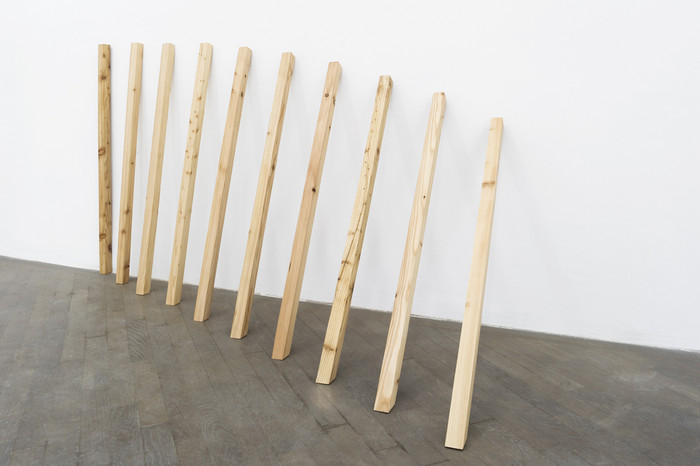 French artist Julien Bismuth (*1973, lives in New York and Paris) works at the interface of visual art and literature. Most of his oeuvre builds on texts found or penned by the artist. Bismuth's approach combines words with objects, photographs and film material, integrating them within collages, installations, and developing text-based performances and video works. Bismuth also founded an independent publishing house Devonian Press together with Jean-Pascal Flavien in 2005. He currently has a solo exhibition at the GAK in Bremen and his work has been shown in venues including the Tate Modern, Kunsthalle Wien, Schirn Kunsthalle Frankfurt, CRAC Alsace, Bloomberg Space London, ICA Philadelphia, Villa Arson Nice.

One of the works in the exhibition "Catalog, version 1.1 (Serving Friction)" has been installed online at the following link:

The show consists of a series of works linked by two main "threads.” The first is that the starting point or "spur" of each of these works is the fruit of an encounter, whether with a text, found images, or sculptural forms that the artist happened upon while working on something else, etc... The second is that each piece is generated first by a procedure of fragmentation- cutting a whole into fragments or isolating a fragment from a whole, then trying to find a new form for the fragments in question. The new composition often erases the origin of the fragments which compose it to produce something else altogether: another text, another image, a self-contained work.

A selection of fragments taken from two texts by Karl Kraus: "In dieser grossen Zeit" (1914), and "Man frage nicht..." (1933), performed by the ventriloquist Alpar Fendo. These texts address Krauss's decision to respond to the advent of both world wars by means of silence, a silence which he nevertheless felt the need tp “preserve from misinterpretation” by writing these two texts. The ventriloquist makes the paradox of this gesture visible, by speaking the texts, but without moving his lips. A live performance of this work was also produced for Bismuth's current solo exhibition at the GAK Kunstverein in Bremen.

2. Audio piece: "Catalog, version 1.1 (Serving Friction)" A composite text built out of descriptions of artworks taken from art reviews, press releases, and other related media from 2010. All proper names (including names of venues and titles of artworks) were removed, and the remaining fragments were then composed into a 4h50 long audio recording which reads as a single, uninterrupted catalog of anonymous works. The recording was produced using a synthetic text-to-speech program. http://soundcloud.com/galerie-emanuel-layr/julien-bismuth-catalog-version

4. Video III: "Fuss fassen The point of departure for this work, performed at the COCO Kunstverein in Vienna, are the following two phrases : "to think with one's feet," and "to think on one's feet." The footage shows the feet of Julien Bismuth and of the artist Andreas Duscha, as the one talks and the other translates an improvised response to these two phrases. A work about two questions: How does one come to an idea? How does one give form to it? As Bismuth's response takes form, it is interrupted and at times even undone by Duscha's translation, which alternately follows and departs from its source.

5. “Untitled (Frustum)”: If much of Bismuth's previous collages have been figurative, and sourced from contemporary newspaper images, these images of torn and reassembled landscape photographs present a sequence of empty hybrid landscapes, more formal and visual in nature than his other collage works.

6. "Whole in parts (1 and 2)," "Wholes in part (1 and 2)," and "A part." These five sculptural works are based on the idea of producing an object whose form and occupation of the space is defined by a simple cut, or series thereof. As such, like the collages, these sculptures are linked directly to the title of the show: frustum, meaning a cut or split fragment of a larger shape.
www.emanuellayr.com