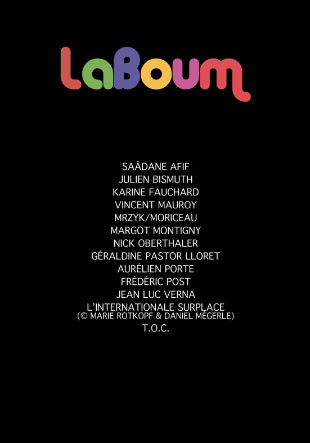 We wanted to have a less intrinsically didactic concept for a show, one with more of a narrative character. 'La Boum' stands here for something like 'ka-boom' or one big party, but also alludes to the films of the same title, La Boom and La Boum 2, which presented a very clichéd view of France to the German-speaking countries. The title unites different artistic positions partly rooted in drawing but which primarily share French origins. 'La Boum' is also to be understood metaphorically: an exhibition that perhaps addresses a particular laid-back attitude to life. ...'La Boum' is an explosion, wallowing in it, the buzz, being cool, a party and what's left of it...
This – only superficial – light-heartedness, which also goes with the choice of medium, is not one with the quality of any particular place or nationality, but more of a global phenomenon applying to a whole generation. The basic tenor stems from more political aesthetics or formal approaches than from an aestheticised politics.
Any site-specific references remain only as formal references or diary-style quotations.
Nick Oberthaler who, in collaboration with the gallery, selected the artists in France and in an international context according to his own subjective criteria, is by no means claiming to produce a comprehensive survey. The show highlights the impossibility or pointlessness of making categorisations according to nationality or group-generalisations; they usually only generate new clichés.
The aim is to show established positions as well as an emerging generation with less exhibition experience. Most of the participating artists have studied in different countries and also try to alternate between a number of locations. The media represented are: drawing, animation/video, painting, photography, music, installation and object art.
www.emanuellayr.com