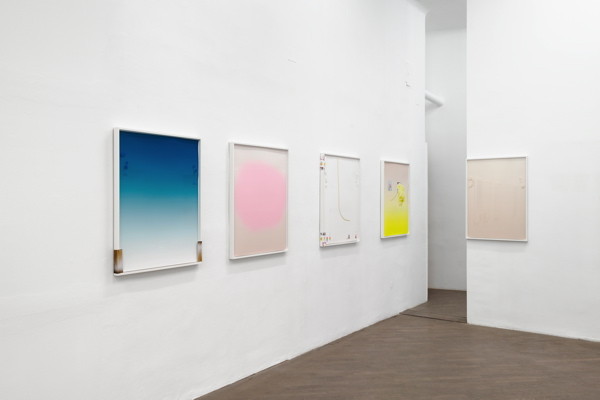 Note: In Lisa Holzer's ongoing series The Passing colour sometimes literally passes, permeates the glass, and comes out of the picture. In But yes, but yes! nail polish tries to permeate the glass to come into the picture. And in Yellow, a 2012 performance by the artist, described as On/off, glasses are touched with yellow before drinks are served, parting with colour, yellow was passed onto the audience's hands via with yellow finger paint Tactil color touched glasses of Aperol spritz.
Somehow some of the pictures in this show have coloured fingerprints on the glass' surfaces of their frames matching the colours on the prints beneath. It may only be, how romantic, dirt of old works on young ones in matching dull colours you cannot make an omelette without breaking eggs. And the direction taken by the colours remains unclear. And everything's ensnarled and lumps and thus is relentlessly hopeless rather than romantic. Fuck young girls. my hand against may hand against