I Come In You 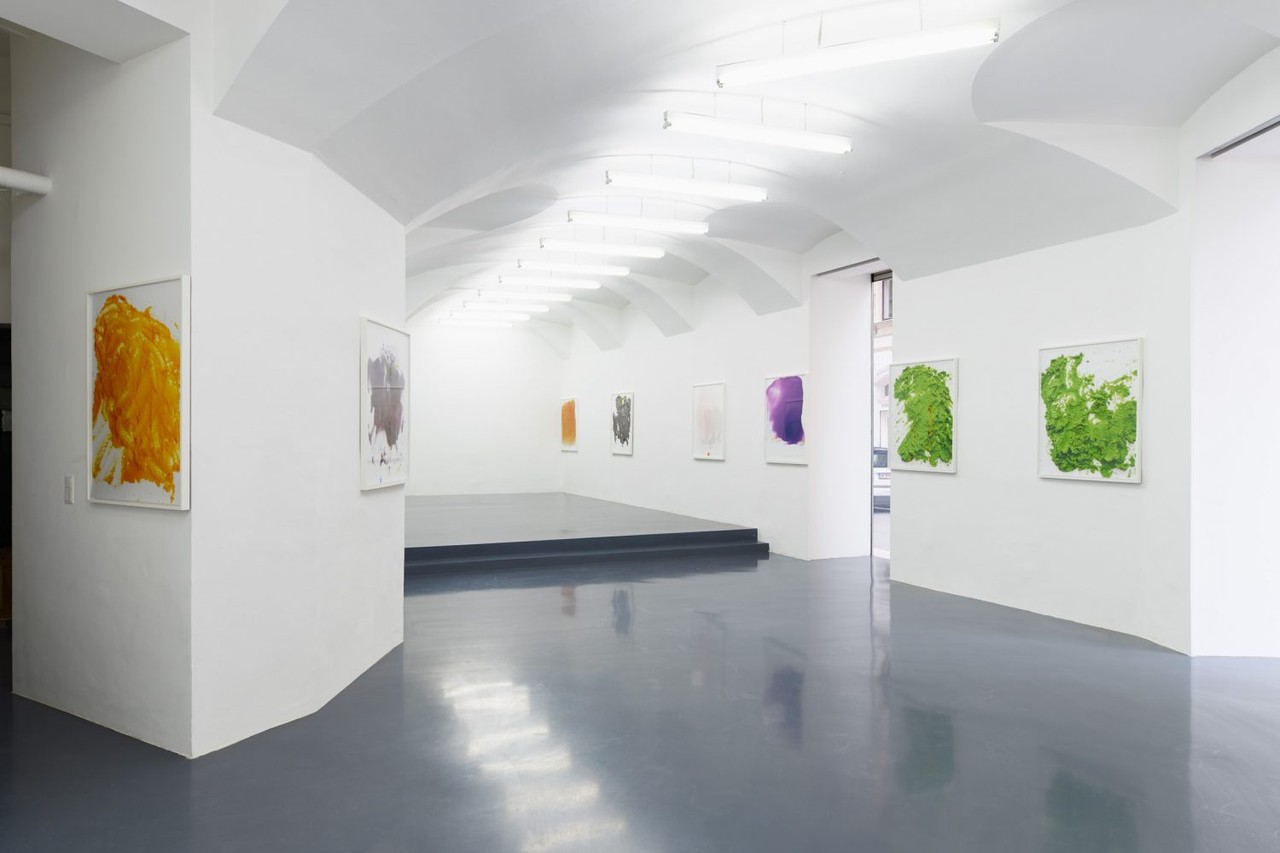 For her third solo exhibition at the gallery, I come in you, Lisa Holzer’s The Party Sequel (Berlin) (1) and The Party Sequel (Paris) (2) come together for the first time. The Party Sequels follow a series of pictures of smeared puréed lentils evoking shit and concrete in shapes inspired by Morris Louis’ 1950s Veils series, merely transformed to portrait format, and pictures of sticky white sugar icing in similar shapes. They were on view here in the exhibition Fieber in 2016. Kari Rittenbach referred to them as paintings.

I was really happy with the hanging of the works in Fieber, this hanging now equals it. There is something special happening in ignoring thus using the two steps in the gallery.

The Party Sequels are pictures of puréed potatoes, and peas, and black beans, and carrots, and pictures of differently coloured sugar icing in whose sticky, soggy surfaces I am sometimes mirrored. You. I am in the middle of your picture (3). A somehow crooked narcissus-idea plays here as well. The pictures are pigment prints on cotton paper framed in exclusive white varnished frames in the size of torsos-plus-aura. Both mashed potatoes pictures are a little too pale.

The shapes of the puréed potatoes, peas, black beans, and carrots, and the coloured sugar icing are freer interpretations of the Veils shapes and/or inspired by two watercolours by my little son.

That process, sounds and all, of puréeing, spreading, and smearing, and photographing these carefully overcooked lumpy potatoes, and peas, black beans, and carrots which – instead of shit and concrete – evoke or should evoke only shitty-sweet regression, is very satisfying. As is the whisking of icing, coloured or not.

Food has to do with body, and desire, and destruction, and painting as well.

What do I tell, the pictures me? Are they weak enough? Vulgar? And how frustrated, resentful, aggressive, how passive-aggressive is I come in you, if at all? Would these pictures fail as abstract expressive or be taken up in the contradictions of Abstract Expressionism respectively its hangovers? Are these pictures paintings or how much paintings? Are they beautiful? And why again??

What kind of echo is this? What a party!? Does this second part answer the first?

Apparently Louis was a loner, they say he had few friends and rarely discussed his art with anyone, not even his wife.

Emily Sundblad said: “But I think also people drink too much to really cause a revolution. They get too drunk, and they cannot do anything.”(4)

And who gets invited? Together with Trevor Lee Larson I was invited to do a performance for the Special Program of last years’ Art Berlin for VIPs, at least they got invited first. This is a VIP dream. And another border/edge/verge (Rand) of this exhibition, of me.

Morris Louis is dead. Others die too. Photography as painting has a connection to death. Language anyway. We die later.

Édouard Louis writes: “Years later, while reading the biography of Marie-Antoinette by Stefan Zweig, I will remember the people who lived in the village where I grew up, my mother in particular, when Zweig speaks of all the furious women, worn out by hunger and poverty, who, in 1789, descended upon Versailles to protest and who, at the sight of the monarch, spontaneously cried out Long live the King!: their bodies – which had spoken for them – torn between absolute submission to power and an enduring sense of revolt.” (5)

I am still interested in surfaces and the question what a picture is, a picture constitutes. Its instability, elasticity or permeability and silence. Its borders/edges/verges (Ränder) and mine. The pictures cry. Sometimes colour passes, permeates the glass, comes out of the picture. Do they puke a little? I don’t know (exactly) why they puke, or cry. All is leaky and leaks through. Crying as readymade and puking as well. And the not coated glass of the frames mirrors everything. You?

My mascara is smeared or theirs. Runs, literally.

Intensities visualise in more or less amounts of rather different liquids. What is it with tears? How transformative is crying? I am interested in crying as bodily expression, action, as means of transition, communication, as one border/edge/verge (Rand) of me, my face, my work, as leakage or readymade, crutch, ..

We’ll cry, maybe. As crying, as one border/edge/verge (Rand) of my work, my face/of me or as some kind of door, is, what I am currently thinking about. I want to touch something. My pictures cry, after they sweated for some time now. How do they, I act on the world?

Sometimes there is no border/edge/verge (Rand).

I feel cheesy, moody, needy, ashamed as an artist. Porous like a door. A hustler. How regressive are things? How porous am I? How involved? What comes with tears, matters? And what do I not say/see, avoid, again, in order to go on, forward? as artist?? What recurs? Hesitation? I used to cry a lot at parties.

Anger and sadness live in suspended relation. And do get mixed up.

I come in you.

The Party Sequels are accompanied by I cry., an even chattier version of this press release in the form of a poster.

An edition of crying champagne glasses are available via Gallery Gillmeier Rech in Berlin.

ps: In 2000 the European Union sanctioned Austria and you could get passport jackets, which said in golden letters and unfortunately cheap print in two or more languages something like I didn’t vote for this government. Carrying an Austrian passport used to be embarrassing. I still use this jacket. Sadly, the print long ago vanished and today, -this is distressing- no border official would even care.

(4) But I think also people drink too much to really cause a revolution. They get too drunk, and they cannot do anything. Emily Sundblad in WELCOME TO THE TATE CAFÉ a conversation between Merlin Carpenter, Emily Sundblad and John Kelsey. Paris, March 2012.