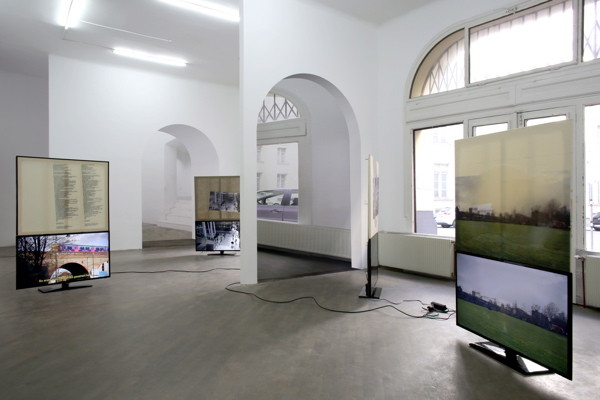 We are pleased to announce Philipp Timischl's first solo exhibition at Galerie Emanuel Layr. The title of the show, Yet, The Alternatives On Offer, is also the title of all five exhibited sculptures, which consists of works on canvas mounted above HD flat screens. Four of the five screens show sceneries of London and Paris. The canvas mounted on top, displays printed stills from the video playing below on the monitor. While on the other screen, the work "Patchy at best," accompanies the artist and a friend walking through the streets of London, while the unsteady camera settings not only captures visual material, yet also records sound. To help understand the ongoing conversation, the artist added subtitles to the video, sometimes in German or English. In addition, a complete transcription of the conversation is placed onto the canvas that sits above the screen. In comparing this sculpture to the others, there is no duplication of the video onto the canvas, rather the text on its own functions as a visual substitute.

A new artistic practice presented in the show are Timischl's photographic vinyl-prints that are installed on the walls and on the floor. At first sight, one recognizes arches that act as "extensions" of the actual architectural space. The artist uses photographic documentations of former exhibition spaces, such as his artist-run-space HHDM (which operated from April 2012 to March 2014) and cityscapes of London and Paris. For these vinyl-prints, Timischl uses an art historical technique called Anamorphosis, an optical illusion in which the subject can only be viewed from a certain angle. Translating it to contemporary practice, this particular effect seen on the printed-vinyl's can solely be viewed through the eye of a camera or on a photograph.This effect was not only used for the works on the wall, but once again for the work installed on the floor; a video sculpture stands on an allegedly wooden plank that appears to balance over a massive hole in the ground, where a bird’s eye-view of the city of Paris is visible. While taking the idea of documentation by reproducing already existing materials, Timischl adds another level to the idea of recreation of his own show, through the use of photographical documentation (i.e. installation view).
www.emanuellayr.com