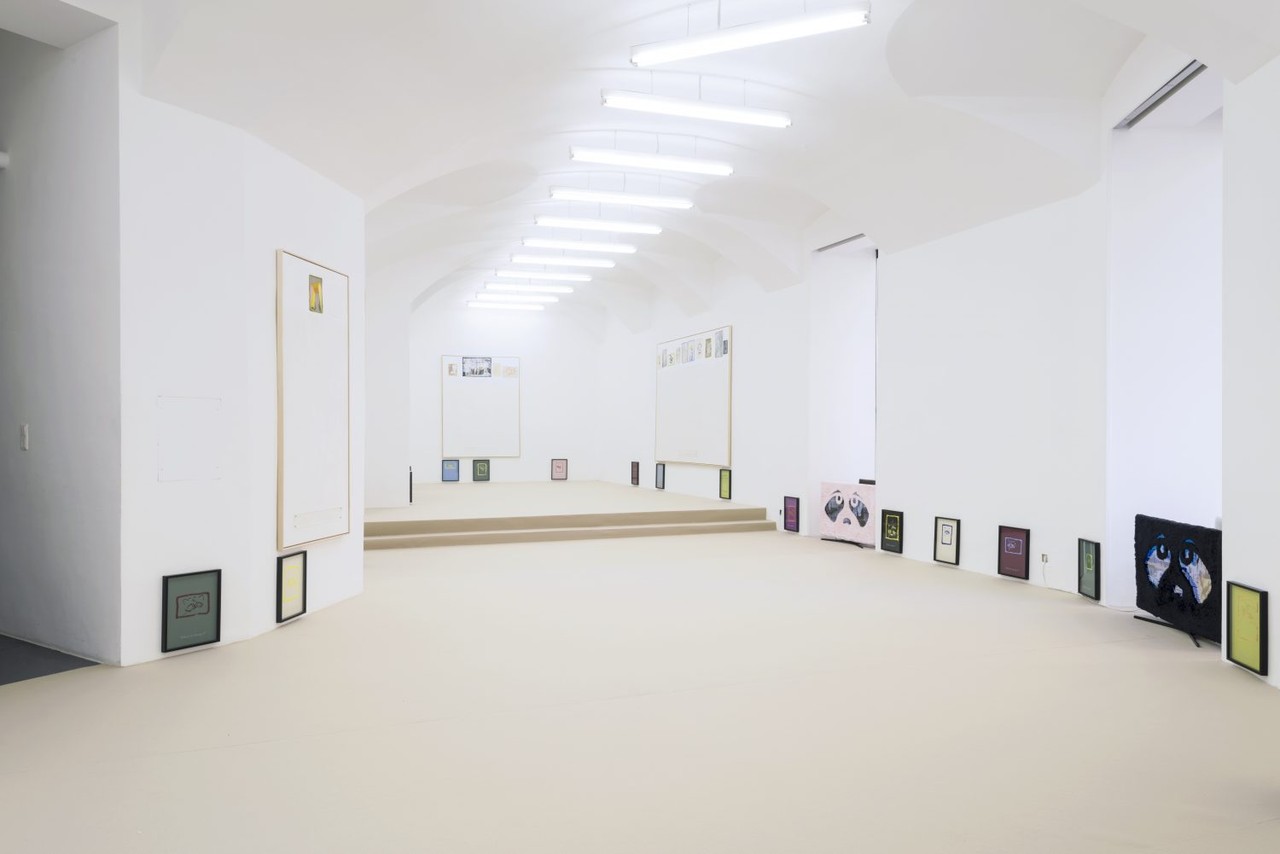 The titles of the works in the exhibition are as follows:
Hostile Habits Domestic Monuments
Class Drag
Born to fish, forced to work
Men are horrible. Men did all the bad things. I hate men.
Is your life average?
Opportunity costs, you know?
Which artwork reminds you of la défense?
Who’s in charge?!
Enemies in power

By entering the space, the viewer discovers the gallery floor to be entirely covered in beige carpet and is confronted with 26 very low hung drawings of racoons, six large scale paintings, installed above them and five tv sculptures.

For his latest exhibition, Timischl has created a new series of works that circle around the topic of social classes in relation to the art world.

The drawings of racoons are all housed in frames with engraved glass asking ‘Who’s in charge?!’. A question which resurfaces throughout the show. The specific hanging of the works and leading question forces the viewer to crouch down to properly see the individual pieces, hence evoking a vigorous awareness towards the works and underlining the power dynamic between art and audience. The mostly plain but large paintings are installed slightly above the drawings, almost sitting on the framed works. While big parts of the canvas are left empty and only casually stained with white paint, the upper parts are filled with collaged miniature paintings, covered in shiny epoxy resin evoking the idea of a family photo wall or a teenage bedroom poster arrangement. Timischl added the titles of the works with transparent engraved acrylic glass signs which are screwed directly on to the canvas. The idea of family, belonging or heritage gets picked up again through the imagery used. Examples are a picture of Ru Paul’s Drag race queens posing as aristocrats, a rock band group photo or on a more personal level, some sketches of HHDM (a non-profit art space co-ran by Timischl and two friends, Daphne Ahlers and Roland Gaberz).

The sculptures are placed around the exhibition, filling the gaps and niches of the gallery space, resulting in an all over invasion of raccoons. They show a four video shuffled playlist consisting of found footage and artist-shot material.

One is an advertisement telling the story of a Mykonian fisherman – working half naked on his fathers boat he waits all summer to finally attend “Xlsior”, the island’s international Gay Festival.
The next video is a multi-angled fan recorded live video of Linkin Park playing on the Red Square in Moscow during the Transformers movie PR Tour.

The third video again is a promotional video, this one mainly directed towards UK companies, trying to convince them to set foot in one of Europe’s biggest commerce areas located in Paris and called La défense (The resistance).

And finally in the last clip you can see Timischl himself in Drag, stepping out of an Uber and trying to enter a club.
www.emanuellayr.com