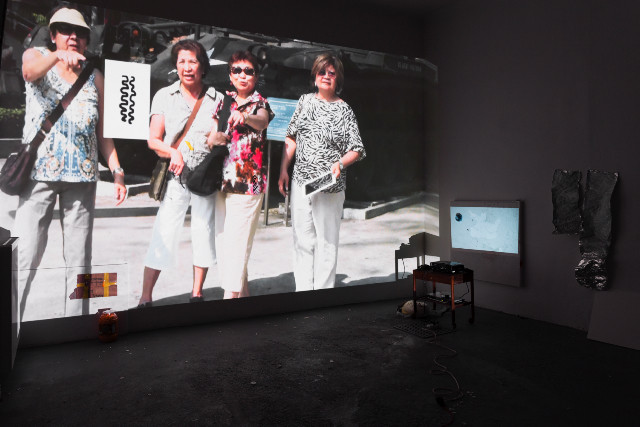 Aesthetic has long become a commodity of the twenty-first century, has already been internalized by mass culture and has been implemented by the market as a functioning construct of values, lifestyles and experiences.
Trisha Baga & NO BROW is a trial version of two separate shows interlacing and corresponding with each other. It takes as its point of departure the interest of young artists in the appearance and design of the everyday and its free circulation through visual circuits of distribution. By regurgitating styles of their surroundings, the artistic positions in Trisha Baga & NO BROW not only reflect the re-calibrated relation between applied and autonomous art, but also probe the currency of design as a diagnostic tool to uncover the hidden ecologies of the things that fill the lifeworld. However utopian current approaches to design may be, this show focusses on artistic strategies of re-staging and reiterating designed networks, activities and services. Doing so, the artists that come together in the show explore anew the modernist promise of universality and democracy in today’s era, in which the modern dualisms of subject and object have irrevocably proven obsolete.
After all, as Bruno Latour would have it, only a conception of a democracy expanded by a non-hierarchical inclusion of things, or non-human beings and networks can meet the challenges of the present. The mode of distraction here acts as the show’s undercurrent to parallel today’s shifting relation between the tangible, the virtual and the detached flows of information. This mode is reflected in the show’s format that resembles a one-armed bandit. Trisha Baga’s solo installation shall hereby act as the initiating coin – an activating stream of consciousness, surfacing various strings of thought and different layers of questioning the possibilities of being and making today. By staging comments and works of Benjamin Hirte, Lisa Holzer, David Jourdan, Nick Parker, Philipp Timischl, and Nicole Wermers in the gallery spaces next to Baga’s installation, NO BROW will showcase the contemporary nexus of production and consumption and the role of visual encodings and unfixing circulation within it. All artists are invited to contribute to this investigation of contemporary strategies of marketing and the “universal merging with the universality of the commodity form in the amnesic code of exchange value.”