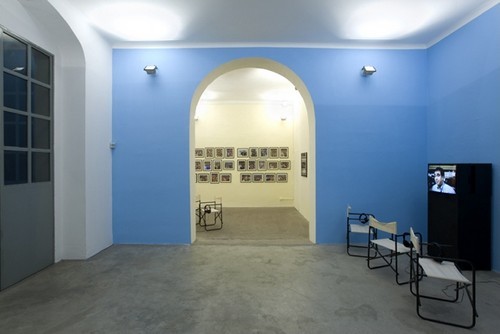 Galleria Emi Fontana is pleased to present Michael Smith’s second solo show.
The exhibition will open on Saturday, January 17, with a performance by the artist and will run through March 27, 2009.
The Gallery is open Tuesday through Saturday, from 11 a.m. to 7.30 p.m.
For further information, photos, etc., contact Alice Cannavà at +39 02 58306855, e-mail: emif@micronet.it

Michael Smith is above all a performance artist whose principal characters are Baby Ikki and Mike. Michael Smith’s first solo show Playground was presented at Galleria Emi Fontana in 2003. Micheal Smith and Seth Price collaborated in the exhibition focusing on Smith’s first character Baby Ikki - an oversized infant in diapers, hat and sunglasses, conceived as a mute, ambiguous character fixed neither by age nor gender; an archetype with an unclear mission, onto which spectators project their own interpretations.

On the occasion of his second solo show at Galleria Emi Fontana Michael Smith is presenting Mike, his other alter ego, a character he has performed since the early ‘80s. In the artist’s own words, “Mike is a vehicle, kind of an empty shell.” Mike is a character of uncertain age whose acts show the struggle of becoming an adult while approaching each new situation with an unprejudiced eye in a mix of comic and mass media references.

This exhibition presents the whole spectrum of the media in which the Mike character takes part. Alongside his drawings, Michael Smith’s audio works will be presented for the first time – both being intimate and disturbing works at the foundation of his performances, videos, installations and photography.

A performance by Michael Smith will be presented on the evening of the opening Saturday 17 January at 8 pm.

Michael Smith was born in Chicago, 1951. He lives and works in Brooklyn, NY and Austin, Texas and is one of the main American performance-artists.
His work has been shown in Institutions and Museums in USA and in Europe, like Documenta VIII, Kassel, Whitney Museum, MOMA and The New Museum in New York, MOCA, Los Angeles, Museion, Bolzen. In 2000 MAGASIN in Grenoble has shown a retrospective of his works and has published a catalogue. The University of Texas at Austin presented Michael Smith’s collaborations on the Mike character in 2008. On the occasion the catalogue Mike’s World was published.
www.galleriaemifontana.com