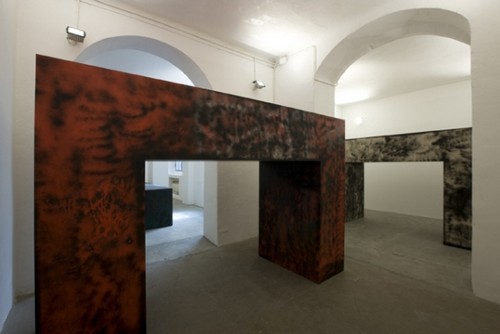 Galleria Emi Fontana, Milano and West of Rome, Pasadena are delighted to present ZEN RIPPER, the second solo exhibition by Sterling Ruby at the gallery, and GRID RIPPER his first European museum solo show at GAMeC, Bergamo.
On the occasion of the shows at Galleria Emi Fontana and GAMeC a survey catalogue will be published by JRP/Ringier with texts by Robert Hobbs, Jörg Heiser, Alessandro Rabottini, and a conversation between Sterling Ruby and Catherine Taft.
Working across disciplines, including drawing, photography, sculpture, video and performance, Ruby is concerned with the interstices between freedom and control, expression and silence, the individual and the communal.
The Ripper trilogy is a three-part exhibition that will be focused on sculpture and painting. The sculptural works are all large Formica geometric forms, which have been spray-painted in a vandalism-abstraction that contradicts the minimalist hard edge into something atmospheric. The paintings, also done in spray-paint take a similar stance; departing from recognizable urban graffiti they befall more in relation to depth through multiple layers of soft aerosol gestures.

Sterling Ruby (born in Bitburg, Germany in 1972) lives and works in Los Angeles. Since his first solo show at Galleria Emi Fontana in 2006 Ruby’s work has received international recognition. His work has been shown at prestigious institutions including the Ullens Center for Contemporary Art, Beijing (2008); The Drawing Center, New York (2008); The Moscow Biennale for Contemporary Art (2007); The California Biennial (2006); The Renaissance Society, Chicago (2005/6); The Turin Triennial (2005/6); Aspen Art Museum (2005); Netherlands Media Art Institute/Montevideo, Amsterdam (2005).
A survey show is being hosted at MOCA Los Angeles until 16 September.
www.galleriaemifontana.com