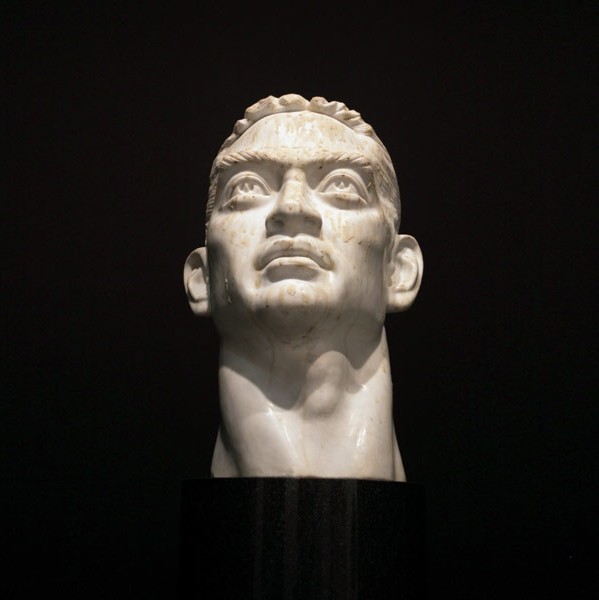 The Hero & Others is the title of LIU DING’s first solo show in Spain at Espacio Minimo gallery. This gallery was also the first to show this artists work in this country, in the last 2 editions of ARCO.
Born in 1976 in the Chinese province of Jiangsu, LIU DING is one of the most active artists on the Beijing scene. His work comprises a great diversity of artistic practices: from large-scale installations and performances, to subversive photography and intimate paintings, including interdisciplinary curating projects. Different media, materials and focus-points are constantly revised by his pertinent critical sense and his extraordinary conceptual vigour.
In this first solo-show at Espacio Minimo LIU DING will exhibit 3 recent works, with The Hero (2007) as the central piece of the exhibition. The Hero is a pure white marble bust made by strictly following the sculptural guidelines of Socialist Realism, introduced in China in the 50’s. This is the typical method for making propagandistic public monuments such as sculptures of heroic figures, and implies increasing its size much beyond the natural, so as to exaggerate its features. The figure must also be looking towards the right at exactly a 45o angle. Liu Ding’s sculpture follows this pattern, yet differs in that it does not represent any one particular hero, and also in that this “hero” was deliberately left outdoors so that it would suffer the effects of erosion from the dirt and also get covered in bird droppings; a gesture that is ironic and defies our perception of heroism in sculpture.
LIU DING will also show his photographic series titled Wallpapers (2007). In this series the artist scanned a selection of 12 wallpaper designs. On these images he integrated Chinese texts, graffitis that express opinions about the culture industry and about social issues –Write History, Erase History, Turn Art Museums Into Hospitals, Stop Biennials, Don’t Buy Chinese Contemporary Art...-, thus transforming the attractive designs before re-photographing them and, unavoidably, the work’s final meaning.
Another sculpture, titled A Girl Standing Peeing, completes the exhibition. This work, in which a young Chinese girl dressed in black stands over a drain, could remind us if the famous scene where Marilyn Monroe holds down her white dress from being blown up by an air vent. But, in this case, and as the title confirms, it is something completely different that occupies her.

Important curators, museums, and the international fair circuit have selected LIU DING’s work to include in many international exhibitions. He has taken part in The 2nd Guangzhou Triennial co-curated by Hou Hanru and Hans Ulrico Obrist, held at Guangdong Museum of Art, and the exhibitions Alllooksame, curated by Francesco Bonami at the Fonzazione Sandretto re Rebaudengo in Turin, China Power Station, curated by Julia Peyton-Jones, Han Ulrico Obrist and Gunnar B. Kvaran at the Battersea Power Station in London and at the Fearnely Museum in Oslo, and his performance Tracing the Wind and Shadows was part of the programme at Art Basel Miami Beach 2006. His work has been shown in many museums, including: Seoul Museum of Art, Kunsthalle in Vienna, Rooseum de Malmö, Sweden, Nanjing Museum in Nanjing, China, ZKM Centre for Art & Media, and many others. In the following months he will be taking part in the exhibitions New World Order – Contemporary Chinese Installation Art and Photography at the Groningen Museum, Holland and Far West at the Arnolfini Art Centre in Bristol, UK.
www.espaciominimo.net