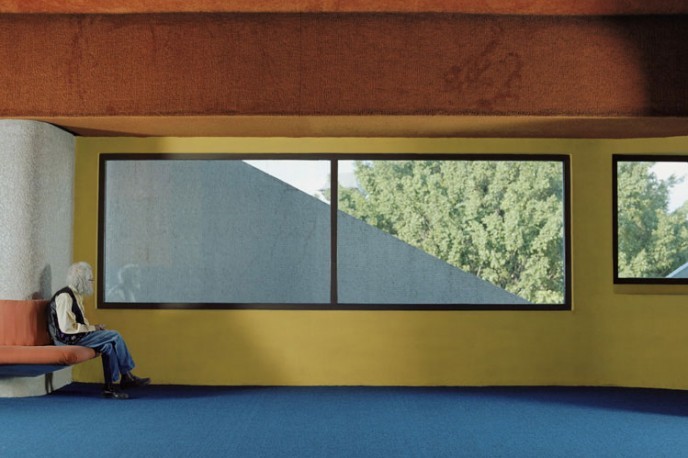 Through a selection of cinematographic and architectural productions, we propose a reflection on certain “regenerative ideology” that has generated heroic, eccentric spaces lacking any apparent usefulness, that surpass late capitalism’s apparent “laissez faire”.

This “regenerative ideology” brings out the failure of a fragmented spatiality whose horizon was and remains, the development of hierarchical geographies to foster processes of ideological indoctrination.

This exposition shows what happened in Mexico, Guatemala and Peru, where the use of an apparent formal linearity, put in crisis the mechanism inserted by certain political and social systems, to build a fragmented space that causes a homogeneous social fabric.

The show groups together five artists who invite us to reflect on gestures whose interpretation is not subject to a logic – recovering the traits of weak thought of Gianni Vattino “Faced with an ferrous and unambiguous logic of need to give free reign to interpretation; against a monolithic and vertical policy of need to support cross-cutting social movements” – .

These gestures are unique using certain hierarchical linearity, as ideological and formal level, to put it in crisis and open building processes of different identities.

Every works and documentation, in this exposition generates a double interpretive tension. On the one hand, shows the “failure” of the fragmented specialization against integration and flexible thinking (Ricardo Lagos in “To a Latin American ‘third way’”). And secondly, how this failure opens new spaces characterized by its eccentricity, heroism and apparent uselessness. Which show unique and transferable social construction processes. As Efrain Recinos pointed out, it is the only way to build guatemaltecalmente.

We can find the “Village model, little story (1984)” (2007-2010). Research by the artist Yasmin Hage (Guatemala City, 1976) on a building program implemented in the eighties in remote communities by the Army of Guatemala, as an experiment for military strategies. Whose aim was to establish a human shield against the guerrillas. This social experiment built a civil settlement on the bank of the Usumacinta river which was gradually abandoned by its inhabitants.

José León Cerrillo (Mexico City, 1976) through the temporary intervention of “Place by zero” (2008-2014), plunges us into a new layout of the exhibition space to question the “rational” distribution of built up spaces. This structure hinders the transition to show obsolete fragmented architectural thought, out contemporary heterogeneous spatial relations marked by flexibility and a multiplicity of layers.

Confronted with this temporary structure, we find a decisive episode of the film “Fiztcarraldo” (Germany – Peru, 1982. Werner Herzog). This visual capture, just 2 minutes long, immerses us in the adventure launched by an Irish eccentric, Brian Fitzgerald “Fitzcarraldo”, set in the nineteenth century. Whose goal is to build an opera house in the Peruvian Amazon jungle. He embarks on the daunting task of transporting a huge river boat and crossing a small mountain with the help of the local Indians. The stubbornness of Fiztcarraldo is an utopian and idealistic song, to build new no “logical” communities that made the European “progress” event of the nineteenth century with the beauty and infinite possibilities of the Amazonian landscape.

Guatemala National Theatre Building’s documentation (Project year: 1971-1978) by architect Efraín Recinos (Guatemala City, 1928 to 2011) and the portrait of Recinos by Byron Mármol (Guatemala City, 1984), tells us about an architecture “made in Guatemala”. This building is considered a fundamental part of the construction process of Guatemalan architectural identity, as an exercise of heroism that integrates part of the discussion by Recinos: “Why do we have to build a plasta block as they do in Europe and the U.S.?. We are a colorful textile country. We must harmonize with the landscape, with volcanoes and Guatemala sky. Nothing to do with the european–gringa squad”.
www.espaciominimo.net