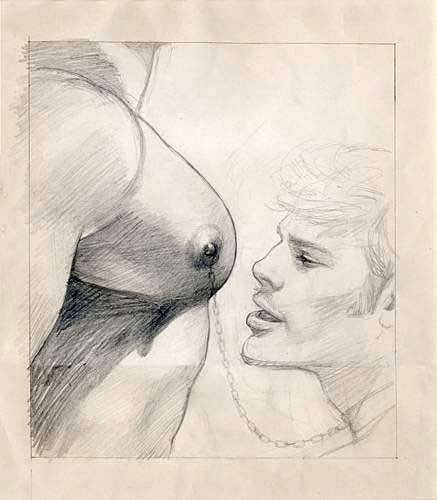 Born in Kaarina, Finland in 1920, Touko Laaksonen (the artists real name) began his studies in artistic design studies in 1939. A year later his country began their involvement in the Second World War, and he was mobilised in 1941. It was then that his fascination with some of the elements that marked his ideal of masculinity begins, such as uniforms and leather garments. It is also at this time when he begins to create his first erotic drawings, mainly watercolours, in which his models, treated with a certain naïf touch, express many of the clichés that society had built around the gay community at that time, like effeminacy or marginality. In 50’s, at the beginning of his career as a designer, he centers on a “photo-realist” style, characterized by obsessive attention to detail, heavy outlining of his images, and an efficient use of chiaroscuro. At this time his drawings acquire fundamental elements that will endure in the future, like a humoristic touch, a feeling of closeness, a much stronger erotic charge, and , above all , an extremely positive attitude towards sexual practices amongst men. If earlier in his work homosexuality was understood as a defect or a perversion, as from this point, at least in his drawings, homosexuals would show themselves open and virile, freely and positively enjoying their sexual encounters, and becoming the central role of stories with happy endings. From this time to the beginning of the 70’s his work has a strong illustrative style. It is as from 1973, when he dedicates himself exclusively to drawing, that there is a greater attention given to the technical quality of the work. The production of the works takes places in many stages, from the plot development to the different possibilities in the spatial composition of the scenes, the detailed studies of each of the characters and other elements that required special treatment, to then make use of all these studies for the final drawing to be published, made in pencil and rarely finished with inks, watercolours or paint.

The inspiration for the work comes form pornographic publications, Soviet and Nazi propaganda posters, the fashion and culture of the day, but mostly from physical culture magazines that he collects as from the 50’s.Rennaisance and Baroque paintings also inform the work, particularly in the compositions, but, as he himself states, the ends of the work are pornographic and not artistic. The intention is to provoke excitement, playing out his most daring and arousing fantasies on paper. And yet his work is linked to that of the 70’s American avant-garde, for whom he later became a reference, particularly in its mediation between high and low culture.

With their absence of individuality, his characters become icons of masculinity. To construct the ideal male, Tom centres on representative figures of various institutions which, through time have been held as prime examples of virility – soldiers, sailors, policemen, jail keepers- to whom he grants exaggerated formal perfection, and excessive virility. His characters progressively echo four decades of change of the ideal male aesthetic. Beardless, hairy, muscular, shaved or pierced, not only do they reflect aesthetic tendencies, they mark them out.