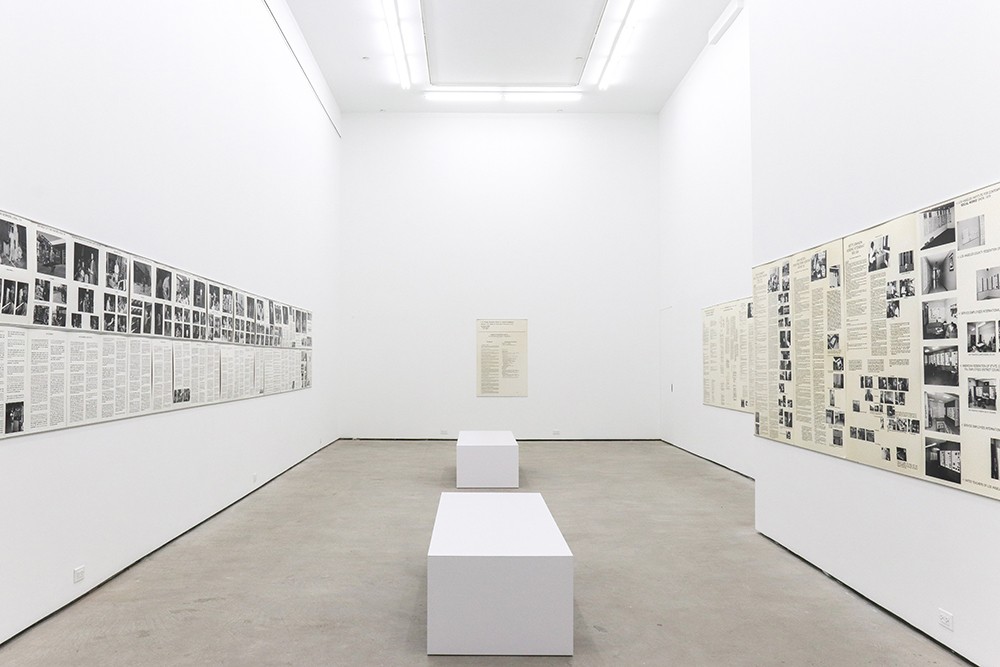 ESSEX STREET is pleased to present our third exhibition with Fred Lonidier. The exhibition will consist of two works from the early 1980s: L.A Public Workers Point to Some Problems, 1980 and I Like Everything Nothing But Union, 1983.

Fred Lonidier is a core member of the San Diego group with Martha Rosler, Allan Sekula and Phel Steinmetz that began studying and teaching at UCSD in the early 1970s. These artists activated both the history of social documentary photography and recent conceptual art, but critiqued and attempted to repair their faults and deficiencies. They formulated a combination of the two genres by applying the format of conceptual art to the purpose of social documentary. Their work has always been political.

For over fifty years Fred Lonidier has dedicated his life's work to labor and class struggle. Beginning with a counter argument to the disembodied premise of conceptual art, Lonidier’s work proves that everything is made by someone, and rather than alienate the object from its production, the object could be employed to report and demonstrate its production. Lonidier’s artwork has always been, as he says, “For Labor, About Labor, By Labor.” The vast tide of words covering the surface of Lonidier’s installations are largely the words of those workers depicted. Furthermore the venues for his artwork have always included union halls, labor councils, universities, factories, protest sites, and public access television. Lonidier was also a co-founder and president of his union, the American Federation of Teachers Local 2034.

L.A Public Workers Point to Some Problems, 1980 was made for a group exhibition “Social Works” at the Los Angeles Institute of Contemporary Art. It is a statement about the fiscal crises of the state, in particular after California’s passing of Proposition 13 in 1978, which drastically reduced property taxes on homes, businesses and farms. In a catalogue essay from 1984 Benjamin H.D. Buchloh wrote “The work addresses the questions of the detrimental impact, not to say disastrous consequences of federal and state legislation in favor of corporate and entrepreneurial interests on those sectors of public life and culture, that we would not normally be confronted with as a museum or gallery visiting art audience, since the system of representation that we traditionally refer to as “the aesthetic” by definition extracts itself – as it seemed – from the economic and political reality of the basis of culture in everyday life, in order to construct the aesthetic mirage that generates pleasure due to its mysterious capacity to disembody and disassociate our perception from the weights and demands of the real. Lonidier’s work successfully counteracts that tendency – which is as compulsive in aesthetic production as it is firmly embedded in the conventions of aesthetic reception – by not only systematically exploring the basis of culture, i.e., labor, but also by specifying the connections where the global system of political and economical determinations concretely manifests itself in the conflicts of individual existence.” Alongside and following the exhibition at LAICA, the work was published in The Citizen, the newspaper of the Los Angeles County Federation of Labor AFL-CIO, and exhibited at the Service Employees International Union 660 and Union 434, the American Federation of State, County and Municipal Employees District Council 36, the San Francisco Labor Council AFL CIO, the United Teachers of Los Angeles 1021, the American Federation of Teachers Local 61 and eventually many many other places.

I Like Everything Nothing But Union, 1983 was made following a request from Joseph Francis, the Secretary-Treasurer of the San Diego Imperial Counties Labor Council, AFL-CIO for a work to hang in the offices’ boardroom. It still hangs there 35 years later. The artwork demonstrates the great diversity of the rank and file members of the affiliated unions: everyone from skilled laborers to college professors, public and private sectors, and including many different genders, races and ethnicities. Lonidier interviewed and photographed approximately 20 different union members who describe their work, its effect on their lives, and their views on the union. It discloses many of the challenges they faced and solidified that their voices would remain present in the union board meetings. The artwork also imparts the dignity of these individuals, their work and their own accounts. In an interview at the time in the LA Times Lonidier says “This is an attempt to put a frame around ideas and thoughts that are already there but that seldom get framed. It is to give workers a chance to be heard.”

Fred Lonidier was born in Oregon in 1943 and lives and works in San Diego. He served as a faculty member at UCSD from 1972 to 2013. His work is currently included in An Incomplete History of Protest an exhibition at the Whitney Museum of American Art. Lonidier was also in the Whitney Biennial in 2014 and had a solo exhibition at the museum in 1977. His work has also been exhibited at the Reina Sofia, Madrid; United Nations Headquarters, Geneva; Istituto Svizzero di Roma; Hammer Museum, Los Angeles; Albright Knox Gallery, Buffalo; Museum of Contemporary Art, San Diego; Centre de la Photographie de Genève; Bronx Museum; Smart Museum of Art, Chicago; Palais de Tokyo, Paris; Berkeley Art Museum; Long Beach Museum of Art; MOCA, Los Angeles; FRAC Poitou-Charantes; High Museum, Atlanta; New Museum, New York and so many other venues. His work is also in the permanent collections of many of these museums.

*For a thorough examination of the extraordinary movement at the time in San Diego, which also included John Baldessari, David Antin, Allan Kaprow, Eleanor Antin, Helen Mayer Harrison, Newton Harrison, Jean-Pierre Gorin, Babette Mangolte and then later Lorna Simpson, Carrie Mae Weems and Moyra Davey see The Uses of Photography: Art, Politics, and the Reinvention of a Medium, an exhibition and catalogue, curated and edited by Jill Dawsey at the Museum of Contemporary Art San Diego in 2016. In that catalogue Dawsey writes “One of the San Diego group’s key concerns, especially with respect to the representation of others, was the inclusion of a great deal of context. This stance opposed that of the single, static fine-art photograph that signaled its aims for autonomy or transcendence.”

Jennifer Klein is Professor of History at Yale University. Klein’s book Caring For America: Home Health Workers in the Shadow of the Welfare State (Oxford University Press), co-authored with Eileen Boris, was awarded the Sarah Whaley Prize from the National Women’s Studies Association. Her previous book, For All These Rights: Business, Labor, and the Shaping of America’s Public-Private Welfare State (Princeton University Press) won the Ellis Hawley Prize from the Organization of American Historians and the Hagley Prize from the Business History Conference. She served as co-senior editor of the journal, ILWCH (International Labor and Working-Class History) from 2010-2015. Klein is the winner of the 2014 Hans Sigrist Prize, a major international prize conferred by the University of Bern and Hans Sigrist Foundation in Switzerland, for her work on “Women and Economic Precarity: Historical Perspectives”. In addition to academic journals and collections, her articles have appeared in Dissent, the New York Times, American Prospect.org, Washington Post.com, The Nation.com, and New Labor Forum. She's been a recipient of fellowships from the NEH, Robert Wood Johnson Foundation, Brookings Institution, and Rockefeller Foundation Bellagio Research Center. She’s currently writing on confinement institutions and the geography of waste in Southeastern Louisiana.

"Fred Lonidier and the Art of Solidarity" This talk will place the work of Fred Lonidier within a longer history of documentary practices concerned with the representation of labor, and will demonstrate how Lonidier reconfigures documentary’s pedagogical function in the service of activating a sense of solidarity among his working class viewers. Such a reconfiguration relies not only upon the particular mode of representation we find in Lonidier’s documentary projects, but also in their sites of reception and means of distribution. Lonidier’s art of solidarity keys us in to a rich and importance legacy of cultural work performed within the spaces of working class politics.

Originally from Tulsa, Oklahoma, Samuel Ewing is currently a PhD candidate in Harvard’s Department of the History of Art and Architecture. His research focuses on the history of photography, in particular the history of documentary practices throughout the twentieth century. His work strives to understand how documentary has shaped political subjectivities in the past, with an eye on their continual transformation in the present. He is currently working on a dissertation, titled, “Instructive Documents: Radical Pedagogy and the San Diego Group,” that treats the work of Fred Lonidier, Martha Rosler, Allan Sekula, and Phel Steinmetz. His writing has been published in Athanor and The History of Photography.

The New York City Labor Chorus, with 75 members representing over 20 labor unions and District Councils, was founded in 1991. Our Chorus promotes union solidarity by expressing through song the history and ongoing struggles of workers for economic and social justice. Our dynamic repertoire combines the power and culture of union music with the great gospel, jazz, classical and folk traditions. Organized labor, united with its community allies, is an irrepressible social force. This is the message of the New York City Labor Chorus.
www.essexstreet.biz