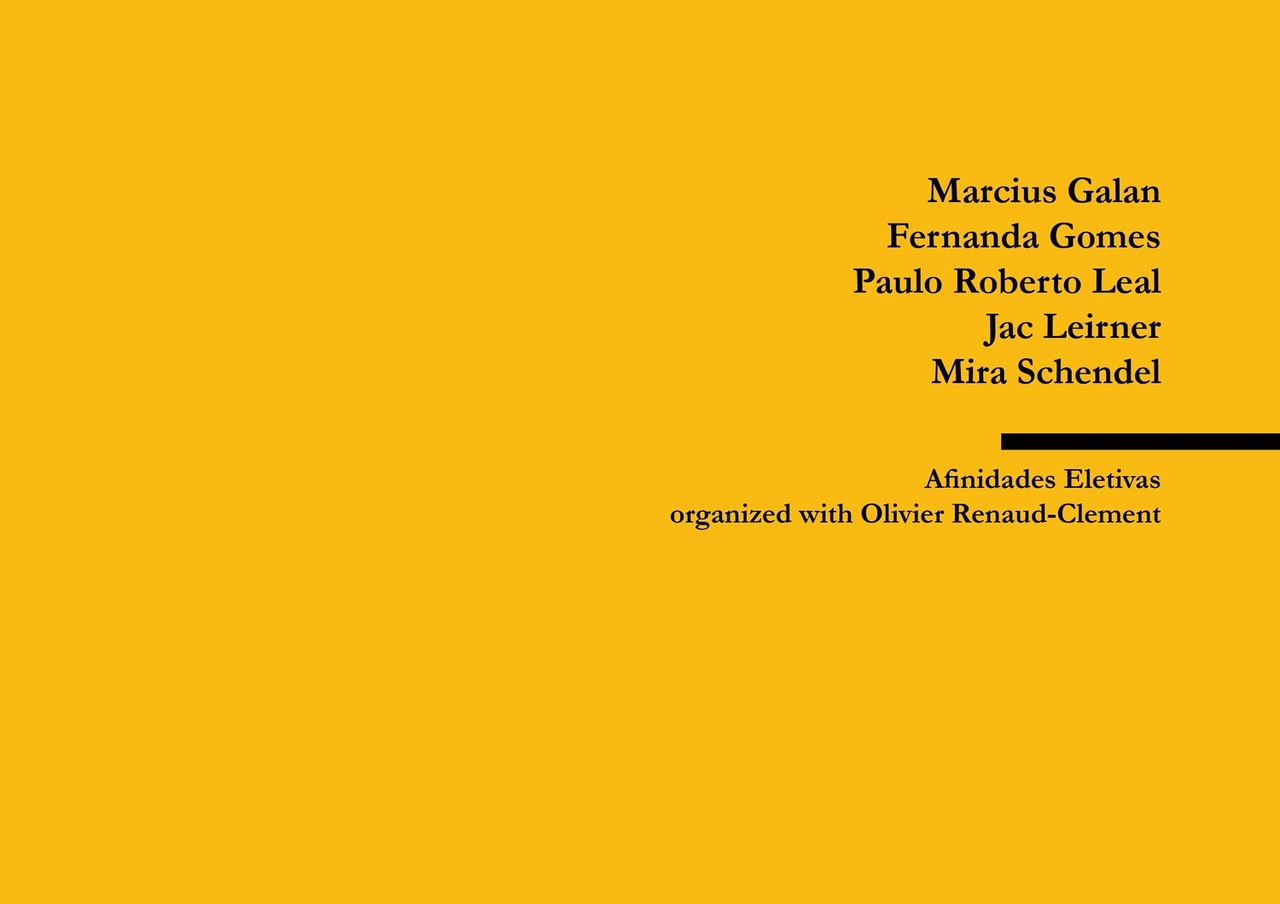 Esther Schipper is pleased to announce Afinidades Eletivas, an exhibition of contemporary and historical Brazilian art organized with Olivier Renaud-Clement. As the title (Elective Affinities) suggests, the selection of the five artists—Marcius Galan, Fernanda Gomes, Paulo Roberto Leal, Jac Leirner, and Mira Schendel—is a subjective one. Each of the artists has developed their own formal and conceptual approach to the legacy of Concrete and Neo-concrete traditions.

While Marcius Galan, Fernanda Gomes, and Jac Leirner will present works produced or assembled in the exhibition space, the practices of Paulo Roberto Leal and of Mira Schendel will be represented by a number of historical works.

Fernanda Gomes (b. 1960) will work directly in the exhibition space, which she regards as an extension of her studio, assembling on site an ensemble of individual works made of wood, canvas, thread, and artificial light. Her works, which mostly use white and the natural coloring of the objects, exist between painting and sculpture, blurring media and their spatial properties, and are adapted in correspondence with each specific architectural space and location.

The works of Jac Leirner (b. 1961) are often created from mundane or formally unremarkable materials such as bank notes, blankets, cigarette paper, or water levels. Her large-scale installations recall the formal stricture of minimalist seriality and the evocative use of found materials characteristic of Arte Povera, while at the same time offering commentary on social codes.

Born in 1972, the youngest of the five artists, Marcius Galan's practice foregrounds perception: the properties of his works—formal, spatial, material—are often effects of trompe-l'oeil, drawing on the expectations of visitors and their familiarity with contemporary art.

Mira Schendel (b. 1919, d. 1988) is one of Latin America's most important and prolific post-war artists. Similar to her contemporaries Lygia Clark and Hélio Oiticica, Schendel's work combines multiple literary and social references in an oeuvre that starts as formally geometric to step into a more lyrical practice often including graphic elements and the use of ephemeral materials. Afinidades Eletivas will include a major work, Variantes II, composed of a unique 14-part group of Monotipias (Monotypes) suspended in space.

The work of Paulo Roberto Leal (b. 1946, d. 1991) has rarely been seen outside of Brazil. Leal's works are often created from basic art material (canvas, paper, wood). The exhibition will include works from his series entitled Armagem which draws on the misrecognition of simple shapes in slightly blurring acrylic frames, challenging boundaries between sculpture and painting by addressing the subjectivity of perception. His explorations encompass a rereading of the constructivist tradition fully embedded in Brazilian culture.
www.estherschipper.com