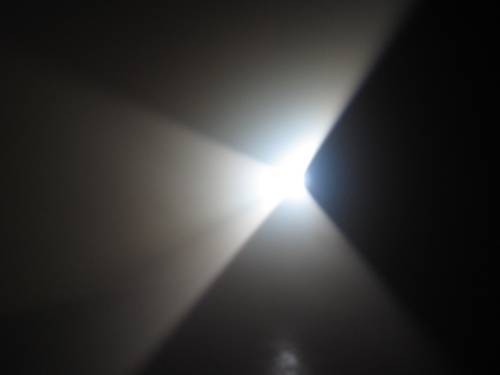 Ann Veronica Janssens’ work can be described as spatial abstractions, developed from and through everyday experience and perception. Her second solo exhibition in the gallery presents two new light installations. Both of the gallery spaces are filled with artificial mist that materializes the light cast by projectors. The luminous beams seem like geometrical planes cutting through space, and the tones of colour change according to one’s point of view.

Contrary to some of Janssens’ previous installations, where the viewer was completely absorbed by colour and the surrounding architecture had partially disappeared, this time the light and its source remain clearly detachable from the rest of the space. The artist characterizes the installations as “fast and light sculpture”, which reveal a sense of sculpture without neither objects nor material. The simplicity of the intervention, and the fact that the installations take in the whole space imply a certain contradiction. There is something spectacular about the scale and the use of light and mist, but it is countered by Janssens’ reductive approach, which can be described as minimal. Furthermore the work insists on evaporation rather than the everlasting, and thereby avoids monumentality.

The mist reoccurs as an immaterial material in Janssens work, where it finds its place in both a natural and an artificial form. She consciously deals with the contrasting effects of it: causing disorientation and partial invisibility on one hand, and imparting materiality to light on the other. The video installation “Berlin Barcelona, 1999”, which is currently on show in Berlin at Martin-Gropius-Bau, documents how a football match was played in almost complete invisibility due to the growing mist.