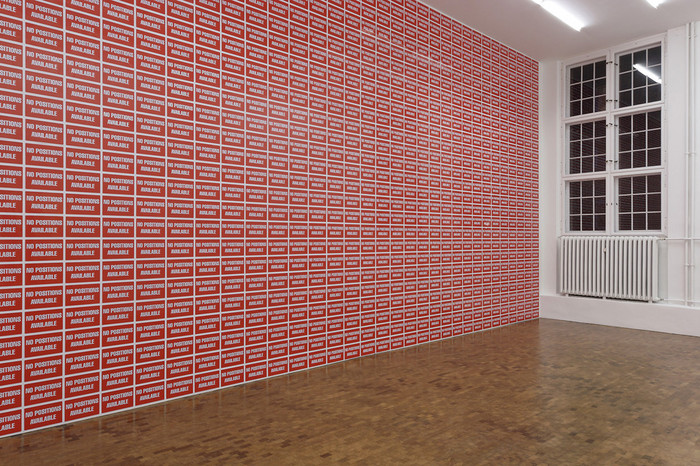 In her second solo show at Esther Schipper, Ceal Floyer is showing an audio installation and two works based on found objects that address the viewer!s perceptions and cognitive faculties. Floyer often develops her works out of serendipitous observations and situations, dealing in a slightly ironic way with phenomena of language and meaning.

The countless signs in No Positions Available (2007) cover one whole wall of the gallery. Floyer plays with the different meanings of the title, which can be read in either material or abstract terms. The sign!s message refers to its own physical properties within the exhibition, becoming part of the space by virtue of its repetition. On the wall, no position remains vacant.

Wish you were here (2008) works with the sentimental cliché habitually written on the back of postcards. This often hollow, unthinkingly repeated phrase corresponds with the object, an empty display rack that complains of its missing “content”. It becomes a picture, a painting against a background. In formal and aesthetic terms, the postcard rack also refers to well-known found objects, such as Duchamp!s Bottle Rack, which he exhibited without making any alterations. Unlike Duchamp, Floyer gives the object a new name, shifting it onto a semantic and poetic level.

Although the title Dancing Flames (2007) subtly influences the way viewers perceive the piece, they are then left to experience and judge what is presented for themselves. In the space, sound and image are clearly separated from one another. The merging of the two takes place exclusively in the viewer!s mind. The two flames move in synch; the installation is not choreographed in any way; the music of various styles is played in a random order.

From 15 November 2008 to 23 February 2009, the Museo d'Arte Contemporanea Donna Regina (MADRE) in Naples will host a solo show of Ceal Floyer!s work. The exhibition will be accompanied by a major catalogue.