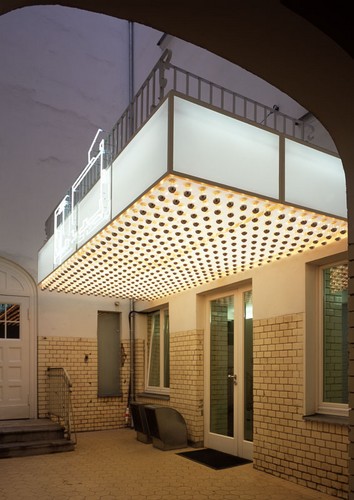 The title of Philippe Parreno’s installation at Esther Schipper - ‘Interior Cartoons’ - refers playfully to interior design. In the courtyard a huge theatre marquee adorns the main entrance to the gallery. It is similar to those found on Broadway theatres, and complete with 448 silver-mirrored light bulbs attached below. The ornamental part on top echoes the banister of a small flight of steps in the courtyard, and where normally the play or movie would be announced, a neon sign depicts the floor plan of the gallery.

Inside the gallery the spectacle announced by the marquee takes place on a surprising level. The existing windows are covered by a set of large aluminium frames with indoor vinyl-glass windows in a milky white colour. Due to their over dimensioned handles, they have a cartoon like character. Curtains with electrical motors are installed in front of them. From ventilation-slots placed inside the walls small evaporators atomize six different smells. When the blinds are lowered the smell of dust, coffee, and plastic gradually take in the space one after the other. After a while the curtains go up, and the smell changes to that of rain, trees, and grass. Concurrently the neon lights normally enlightening the gallery space are dimming up and down in various intervals. The space seems to be breathing or to have lost control.

The artificial light, daylight, and different smells are orchestrated through a script that has been written to a DMX-controller. Also the neon sign and the light bulbs of the marquee outside is part of this choreography, with their growing and lowering intensity. Rather than making an architectural intervention, Parreno has activated the space as such, and what is normally regarded as exhibition techniques form the main characters in a careful but open choreography.

In collaboration with Douglas Gordon, Parreno recently realized the acclaimed film ‘Zidane: A 21st Century Portrait’ that was presented at this year’s Cannes Film Festival and at several other international film festivals around the world.

In November the exhibition ‘All Hawaii Entrees / Lunar Reggae’ curated by Parreno (in collaboration with senior curator Rachael Thomas) will open at the Irish Museum of Modern Art in Dublin (30.11.2006-18.02.2007)