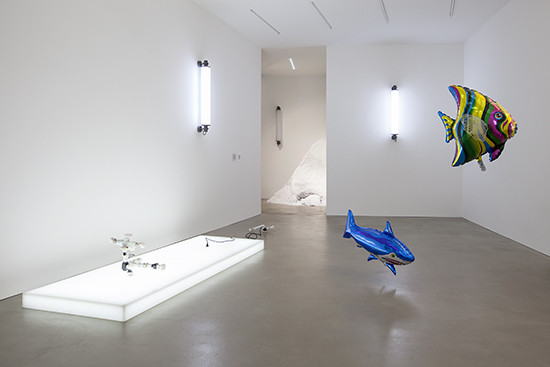 Esther Schipper is pleased to present quasi-objects, Philippe Parreno’s 7th solo exhibition with the gallery. Philippe Parreno has often placed his works within the philosophical framework of ‘quasi-objects’ – objects whose existence is inseparable from the relationship to the context in which they are exhibited. Parreno presents a selection of objects that have appeared since 1992, that span his practice and now reappear within a new setting, their relationships with each other, and therefore their existence, markedly altered.

The speculative concept of the ‘quasi-object’ is one that seeks to radically redefine the relationship between the subject and the object. Originally devised by French philosopher Michel Serres, and then developed by fellow philosopher Bruno Latour, it questions the common belief that the world is neatly divided into two realms – the ‘human’ sphere comprising the social constructs of language and culture and the ‘external’ world made up of factual objects.

Throughout his practice, Philippe Parreno has conceived his exhibitions not as a collection of objects but as part of a scripted space, a mise-en-scène, where a series of events unfold. He has redefined the exhibition experience by exploring its possibilities as a coherent “object” and a medium in its own right rather than as a collection of individual works. For quasi-objects, Parreno has written an algorithm, a mathematical automaton, to synchronize the behaviour of the objects - the works become a network of quasi-objects that appear and disappear, act upon and, in turn, are acted upon.

Philippe Parreno studied at the Ecole des Beaux-Arts in Grenoble from 1983 until 1988 and at the Institut des Hautes Etudes en arts plastiques at the Palais de Tokyo, Paris from 1988 until 1989.

From November 15 through December 2014 Philippe Parreno’s exhibition How Can We Tell the Dancers from the Dance will be on view at the Schinkel Pavillon.
www.estherschipper.com