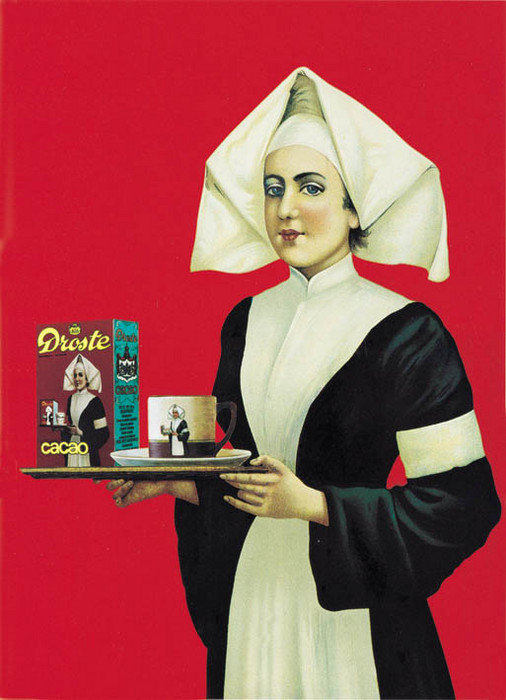 The term ‘the Droste effect’ is named after a Dutch brand of hot chocolate whose box features a nurse holding a tray with a box of the same brand, picturing the nurse holding the very same tray etc. Known as recursion in specific sciences, such as mathematics or linguistics, the term describes a process of repeating objects in a self-similar way. Without wanting to demonstrate this effect, the exhibition gathers works sharing a similar kind of self-referential nature, either formally or in their way of re-enacting past events or imagery, and it focuses on what can be described as a renewed interest in the image as such. Conceptual art as well as what has become known as relational aesthetics sought to dissolve the object and the image into thoughts, ideas or social events by emphasising literal participation in a collective situation. Similar interests can be traced today, but without the desire to abandon the image, as a shift has taken place in our capability of and willingness to perceive the social, political or even imaginary reality of the object.

Even though the exhibition includes diverse medias such as painting and film, most of the works feature different kinds of photographic reproduction. Another common trait is their way of re-representing already existing imagery, ranging from Anne Collier’s reorganisation of different covers of Artnews to Joachim Koester’s photograph of a black mirror once used by John Dee to pick up images from the otherworld. Another example is Rosalind Nashashibi/Lucy Skaer’s 16 mm shooting from the sculpture galleries of the New York Metropolitan Museum. The treasures are momentarily lit by strong flashes, and in that sense the work reflects upon a medium related to its own, namely photography. This also counts for Wolfgang Tillman’s ‘paper drop’-series that depict nothing but photographic paper as it curls in response to the natural effects of surface tensions.

In other cases particular stories or images are transformed into another medium. Valentin Carron’s negative rendering of an advertisement from the 1950s is painted onto tarpaulin, and Ryan Gander’s reassembled corkboard used to serve as a pin board displaying documents related to the myth of ‘concrete cancer’, a disease that effects Corbusier buildings by eroding the concrete materials. Mario Garcia Torres’ slide work is centred on a specific story from the film Smoke that in itself reflects on the small but meaningful differences in the repetitive rhythm of everyday life.

Recursion, repetition, or re-enactment seem to serve the function of opening up an imaginary presence in these works – an imagery that is just as strong as the visual one.

For further information and images please contact the gallery.