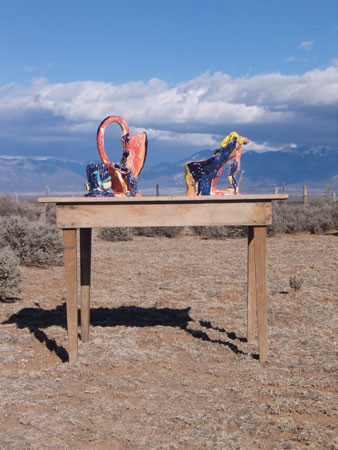 Galerie Eva Presenhuber is delighted to announce “on Carson mesa“, its second solo exhibition by British artist Andrew Lord. Made from multiple ceramic sculptures, the gallery will present the artist’s three recent works snow falling, at sunset and by starlight, all made during the last months of 2013.

In this exhibition, Andrew Lord returns to one of his earliest influences, the ceramics of Paul Gauguin. On three six-meter long wooden tables Lord will present three of his recent works, each an assemblage of up to 15 individual ceramic works. Heads and faces are blended with mugs and vessels, loop-handed vases are formed from the human figure. Comprehensive in their forms and shapes, the colouring of the three works reflects three very different and strong states of natural light, which constitutes the sculptures as much as the shape of the clay itself. Gaugin has also been the subject matter in Lord`s previous work, yet here the shapes of Gauguin’s ceramics become vehicles for conveying the dramatic light and weather conditions Lord observes on Carson Mesa, a vast wild plain in a remote area in northern New Mexico, USA. These works bring elements of painting, sculpture and crafts into a truce whose instability holds the viewer’s attention.

Andrew Lord was born and brought up in Lancashire, UK and studied in London in the late 1960s, spending much time exploring the Victoria & Albert Museum collections as well as studying the works of the Della Robbia Studio in Florence. Continuing his exploration of ceramics, he worked in Delft and discovered Meissen porcelain and Staffordshire ceramics. Using Rotterdam as his base in the 1970s, his frequent trips to Paris introduced him to the ceramics of Paul Gauguin and to the paintings of Monet, Cézanne, Picasso and Cubism. His oeuvre has been large and steady over a period of 25 years. Andrew Lord is part of a generation of artists that include Francesco Clemente, Julian Schnabel, Tony Cragg and Sandro Chia and others, who, by distancing themselves from the aestheticism and rigors characteristic of Conceptualism and Minimalism in favour of a more sensual, narrative and less restrained artistic expression, contributed to a generational shift in art during the 1980’s.