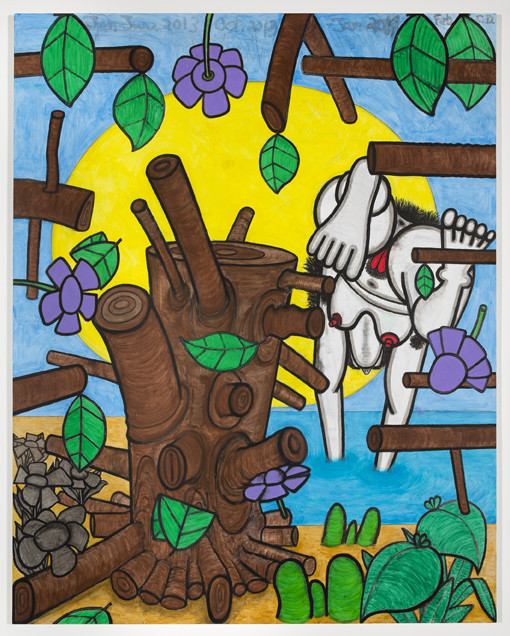 Galerie Eva Presenhuber is happy to present the first show of New York-based artist Carroll Dunham at the gallery’s exhibition space at the Löwenbräu site.

Since the works of American painter Carroll Dunham came to the attention of a broader public some three decades ago, they have passed through various formal processes. Following his early works painted straight onto wood, in which Dunham developed a basic vocabulary using the existing grain of the support, creating mainly abstract compositions in bold colors, in the late 1980s he transferred this development to paper. Finally, the amorphous forms gave way to comic-like figures, sometimes recalling the graphic style of Philip Guston, characterized above all by their distinctive outlines. Around 2000, a male figure in a dark suit became the main protagonist of these scenes: his nose a phallus-like object (something already hinted at in earlier works), he often carries a pistol in his outstretched hand.

The works on show feature the principle motifs of recent years: the former dominance of the aggressive male figure is broken by the arrival in the frame of a nude “sun worshipper,” mostly accompanied by lush vegetation. The figure is characterized by consistently similar and distinctive attributes – a protruding hip is always accompanied by a pinkish red vulva and nipples that even in the back view always stay visible. As George Pendle puts it in his catalogue essay for the exhibition:

“Carroll Dunham is interested in a woman with hair like a black firework, giant buttocks pressed together like clashing cliff faces, taut limbs covered in a filigree of pencil marks like a fingerprint, and an eye-zappingly vibrant vagina. Dunham depicts this woman using the same family of shapes that have always accompanied him – the woman’s nipple, for instance, mimics that of the hat worn by the hermaphroditic gunman who appeared in his paintings of the early 2000s. But while Dunham’s current paintings can be broken down into these abstract elements, the intensity of their subject matter insists that they be taken as a whole. Dunham’s writhing abstractions have been press-ganged into startlingly figural duty and the sum of their parts cannot be denied or ignored. They are not, as in the past, trying out human shapes; instead they have shaped a human.“ George Pendle in „Carroll Dunham, In the Flowers – The Beach“, S. 88/89

Carroll Dunham was born in 1949 and currently lives and works in New York and Connecticut. He has been the subject of numerous one-person exhibitions, including a mid-career retrospective at the New Museum in New York and an exhibition of paintings and sculptures at Millesgården in Stockholm. His work has been included in several Whitney Biennials and in “Disparaties and Deformations: Our Grotesque,” SITE Santa Fe’s fifth biennial curated by Robert Storr.
www.presenhuber.com