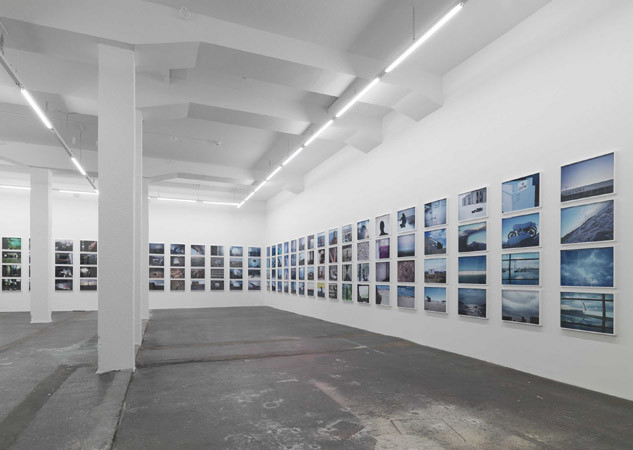 With '99¢ dreams', Galerie Eva Presenhuber is happy to present it’s third solo exhibition with new work by Doug Aitken. Ever since the L.A. based artist was awarded the International Prize nine years ago at the Venice Biennale, he has been touted as one of the most innovative video artists of our time. His exploits spark a recurring buzz. The last time was for SLEEPWALKERS, a multiple projection on the outdoor façade of the Museum of Modern Art in New York that included a remarkable array of stars (among others, Donald Sutherland and Tilda Swinton).
Recalling the aesthetics of video clips, Doug Aitken’s works could be identified as multimedia soundtracks underlining our restless life in a globalized and media-infused world. He has always understood how to develop innovative presentation forms for his breathtakingly beautiful picture material: in his room-filling multiple projections, a linear storyline is fragmented in favor of a visual and acoustic simultaneity. Rapid cuts rhythmize the picture flow. Aitken works with sensory overload, strong soundtracks and spectacular imagery to intensify the viewer's experience.
In his one-man show at Galerie Eva Presenhuber, Doug Aitken for the first time presents an installation that, instead of moving pictures, is composed exclusively of still images. The work is for the most part based on unpublished material that has accumulated over the years. A total of more than two hundred pictures hang on all four walls of the Zurich gallery room. They show situations you can find anywhere in the world: artificial light sources, service stations and, again and again, scenes in airports. Highways, escalators, riverbanks, a skyline full of satellite dishes and aerials. An old woman’s dreamy gaze, a human silhouette against the light of the setting sun. A pair of eyes, a house on a rain-drenched beach, the belly of a pregnant woman, a deserted children’s playground and, several times, the sea and the shore. The theme that links all together is a yearning undertone. Aitken shows moments of mere magic snatched out of every day life’s temporal flux.
In their subtext the melancholic mood of the photos transmits a personal, even an almost intimate ambience. Most of the people, however, have their backs turned to us. Perhaps in 99¢ DREAMS, Doug Aitken is telling storys from his own life, but the work is in no way autobiographical: opposite his photos we recognize our lives, ourselves. The captions indicate the very diverse locations of each of the pictures. Thus the way they are hung next to each other levels geographic differences just as much as it levels the boundaries between the individuals. The arrangement in the gallery room follows a gradual increase in brightness. The shift from darkness, via artificial light and twilight, to bright daylight is perforce the greatest constant.
www.presenhuber.com