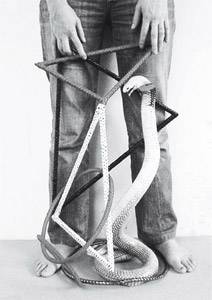 Galerie Eva Presenhuber is delighted to present the first solo exhibition by London-based artist Eva Rothschild (*1972 / Dublin), Living Spring, featuring recent works.
After completing her studies – which she had partially pursued at the University of Bel-fast -, Eva Rothschild won several art awards and prizes, which offered her the chance to participate in a number of exhibitions worldwide. In 2003, she took part in our group show Breathing The Water, followed by a solo exhibition at the Kunsthalle Zurich one year later.
“The Magical meets the minimal”: It is with this felicitous phrase that art literature de-scribes Rothschild’s work. The “magicalness” of her art objects is particularly revealing in her work Hand and I (2003), where the viewer is facing eyes placed on woven paper and hands that make a healing gesture. In addition, beams spread out psychedelically from the center. The combining of familiar 1960s and 1970s new-age aesthetics with the material employed for this piece reminds one of the tapestries and room dividers common back in those days. On the one hand, works like this express the fascination for this era and its religious currents; on the other hand, the artist discusses the ques-tion of images serving as objects of utility while, at the same time, demonstrating the utilization of these images.
In her work Disappearer (2001-2004), first shown at Galerie Eva Presenhuber in 2003, Eva Rothschild joins incense sticks together to form a wall sculpture that reaches into the room like a beam, but eventually dies out, falling prey to a slow decay. This process brings back to mind the original function of the sticks. As the smoke begins to fill the room, it creates a melancholic, dreamlike atmosphere – an ambience typical of Roth-schild’s oeuvre that conjures up the themes of memory and oblivion.
The minimalist element in her work can be perceived in geometric pieces such as Heavy Cloud (2003), where hands seem to hold triangular sculptures that are sharply wedged into each other. The artist has also produced sculptures that combine triangular and round shapes, such as the reflecting, smooth-surfaced pieces Mass Mind (2004) and The Wooden Eye (2003). In contrast to minimalism’s characteristic sculptures of the 1960s and 1970s, Rothschild’s works are surrounded by an aura of obscurity, which makes them exude a sense of magic and mystery.
Other works, in a way, resort to the idea of ‘ready-mades’. The piece Burning Tyre (2004), for instance, consists of a car tire filled with incense sticks that burn up gradu-ally. Although evoking burning tires, or even campfires, the smell resulting from the un-usual combination with incense sticks instantly revokes, and thereby constantly chal-lenges these associations. Hence, this piece of art refers to a nearly surrealist level.
By forging an unexpected link between different types of forms and their aesthetics, Eva Rothschild has developed an artistic vocabulary that – despite the consistent use of titles – defies any definite interpretation, which, as a consequence, offers much room for personal imagination. This is what the artist calls an “occult mode of viewing”, meaning that “there is almost an inability for the looker to look and only see a triangle.”
The collective and private flashes of memory triggered at the sight of these works cul-minate in ambivalent longings and projections. This is because the artist is interested in “an additive, accumulative way of working and of bringing together different things at different times.” Rothschild has indeed created a thrilling form of conceptual art by us-ing objects that are already loaded with concepts.
This balancing act in terms of both form and content reflects the social models of the 1960s and 1970s, which, given that they have lost nothing of their appeal, Eva Roth-schild translates into a new visual language – an adventure with an open ending.
www.presenhuber.com