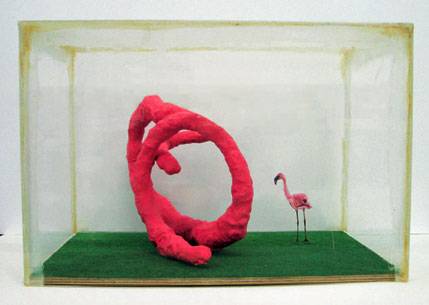 Space and Aura.
The Work of Art Suffering from its Definition and Being a Powerful Thought
By Benedikt Ledebur, philosopher and poet

It is not quite a coincidence that one of the first sculptures that Franz West presented in a public space was a urinal: “[...] it all started with armchairs. I was invited to do an outdoor installation in Nice, so I did this urinal. And then, little by little, it came to me that I could try and use those forms for an outdoor work that, back in the 70's, I'd made reliefs of and that I painted rose, oval ones for instance [...].” Chairs and couches, too, which West has installed outdoors for several exhibitions, are if not ready-mades then at least everyday objects or basic utensils which, due to their handmade, individual production, show the distinguishable, esthetic qualities typical of the originally designed item - qualities that are indeed absent in the industrial design of mass products, from which ready-mades originate. The curved lines of Duchamp's Fontaine urinal may of course give you esthetic pleasure, which lets you forget the object's function or even - although a less likely case - your urging bladder (Arthur C. Danto is right to claim that a number features of this urinal, or those of any other urinal, resemble certain attributes of Brancusi's Bird). Attractive curves in porcelain can, in the same way as the austere tenons of a bottle-holder, strengthen the genesis of a work of art, just as a podium, a title or a signature can contribute to its release into the sphere of art. Yet, one thing that is witty about this Dada object is the sociological perspective that it provokes, thus shedding light on the defining or declaring mechanisms of ordainable institutions and social conventions embodied by museum walls - definitions and declarations from which the object suffers and through which it is eventually understood as a work of art.

When Franz West, who had initial doubts about sculpture and in particular about outdoor sculpture as a form of art, made a urinal for outdoors, he aimed to achieve a paradigm shift, which he did successfully. Just as it is impossible that Duchamp's Fontaine urinal will lose its artistic character when it is carried out of the museum, it is not obvious at all that a urinal becomes a piece of art when it is installed in a public space, even if it can be expected that found in places other than a public toilet or a pissing corner, it will be seen either as some sort of manifesto or merely as skip refuse. In fact, the system declaring objects works of art is far more elaborated. Franz West's subversive bent has pushed the dichotomy between the (private) interior and (public) exterior even further with a urinal to be used in a planned work of art: “On the urinal at the Volksoper [Vienna Popular Opera], I want to add something, that is, in form of a bubble, something between a jug and a bubble named Ykon. Just as the lock needs a key, the urinal needs an ample bladder [...].” The external form is deduced from an internal organic condition. The question as to what higher function organ-like shapes fulfill in West's sculptures shall be examined later on. Nevertheless, a change in perspective or a shift in paradigms is not a question of interiority or exteriority, for it takes place within the very notion of art. In this respect, it is worth considering the following, rather long extract of another interview with Franz West: “[...] To me, the interesting thing about this piece was that it was a ready-made. Today's ready-mades aren't the same anymore as the ones Duchamp did for example, because he took more or less finished products. Nowadays, a ready-made is, so to speak, the artist himself [the concept of art]. From now on, [the artist is] nothing more than a stopover or some [kind of] relay or interpreter. As spoken words materialize, you sit somewhere in between, and while you're in the middle, you have to deal with a materialized thought. Still, the actual difficulty lies in finding the thought you're supposed to deal with - and that's exactly what a ready-made is like today. This may sound confusing, but it's not. It simply follows the way thoughts come into being. You could call it: make-a-ready-made-today! And a thought which materializes is like a seat that has been made available in a - I prefer not to call it a room because all these different notions of spatiality keep puzzling me. [...] What I'm interested in is the proportions and the emotional effect of proportions. But then there's the sculpture again.” Here, the essence of the way Franz West means to change the perspective becomes evident: he gives the immanent rendering processes of a human being seeing, absorbing, selecting and intellectually transforming a form which is open for discussion. However important visualizing the definitional power of social processes and institutional mechanisms may be in a historic moment or as an element of critique, the angle of interpretation, which attributes everything that is discerned through it merely to these processes and mechanisms while forgetting about the possibility of emotions, will suffer the same fate - although in the opposite, top-down sense - as the enchanted one in a fairy tale, who turns everything that his hands touch into gold: just as he is doomed to starvation, creative impulses or thoughts are bound to suffocate from the exclusivity of this angle of interpretation, or at least they are silenced.

Hence, how does Franz West proceed under the newly set conditions of his notion of art? West's form- and color-related reasoning, compounded in space or expressed in terms of proportion, thrives on movement, which makes it as difficult to describe as a train of thoughts during the process of musical composing. As long as sculpture has been committed to mimesis - from antiquity to our days -, defining an object has not caused many problems, apart from those due to historical and iconographic realities or lack of information. Even so, the degree of generality will never be higher than the one of the antique author- and nameless horse on the Roman Capitol, for which Michelangelo held a special fascination and whose metal rear part shows swollen veins leading to the anus. On the horse, whose species has served mankind both as a mount and as a classic example of concept formation since time immemorial, sits the figure of the emperor Marcus Aurelius (whose concreteness, by the way, had long made the catholic posterity mistake him for the emperor Constantine). Rock veins or the casting of bronze may have complicated the sculptor's work, which makes the high-stylized imitation all the more admirable. However, such pieces of art do not cross the threshold of geometrical abstraction (whereas they do transcend the categorical abstraction of “a horse”; in the end, the viewer is always free to choose a geometrically abstracting, cubistic angle). In this light, if Franz West arranges vertical and horizontal lines in his sculpture CENTRIPETALE by providing geometrical forms with voluminosity, this threshold has - historically, too - long been crossed. It is no longer abstraction as a fact itself that distinguishes West's art, but the way the artist is undermining this fact at the same time, whether this results from material or technical irregularities that he lets slip into the geometrical forms, bringing them back into the changeability and ambiguity of organic shapes, or whether this emanates from the aura of his objects, which interact with their concrete environment, exposing, for instance, the underlying structure of a nearby monument representing a male figure on a podium (a psychoanalytical exegesis, although legitimate, may ease one's mind too quickly, which is why West's sculpture should certainly not be misinterpreted - depending on its coloring - as a phallocratic statement or an expression of anal fixation, but rather understood as an attempt to question such centrisms and interpretations devoted to schemes of phallic nature or other). West explains, by referring to the work's title, how the balance between interiority and exteriority can be maintained in this particular case: “If you sit on the ring with your back facing the inside, you feel the meaning of the title, and if you sit on it with your back facing the outside, you recognize its meaning.” What is highlighted here is not only another dichotomy, recognition and feeling, but also an essential part of any of West's works: interaction - either between a work of art and the viewer or the understander, as the three-dimensional model collages demonstrate (the paradigm for which has been set up by the Passstücke [Fitting Pieces], which transform anyone handling them into a living sculpture), or interaction between a work of art and its surroundings, with the outdoor sculptures also functioning as collages. On the one hand, the latter appear to be cut-out forms that insist on their demarcation from their environment, a demarcation which, given that these sculptures have arisen from the world of (artistic) thought, is truly categorial. On the other hand, they have an effect on their environment, renewing its meaning by uncovering the mental structures that affect our perception and that have helped shaping the things around us. The intention behind Franz West's art could be seen as a way of mentalizing reality, parallelizing thought and perception, supported by a cheerful coloring. Particularly telling are his poster designs, where the cut-out figures themselves are, complementarily to the found outside world of the sculptures, the found objects, the objets trouvés, whose boundaries are both redefined and disturbed by their coloring. Another striking example are West's photo montages: just take that sculpture named CORONA, which comes to lie on top of a multi-story building, virtually crowning it with all the life buzzing inside to become the podium of a superior world (of ideas). This particular case of name giving, which, on West's level of abstraction, is tantamount to concept forming, offers a poetic reading similar to Duchamp's naming of his urinal object, Fontaine. However, considering that West's sculptural forms (of thought) are poetically independent and have a poeticizing effect on their surroundings, purely sober names such as Doppelring [Double Ring], System or Gartenmöbel [Garden Furniture] suffice most of the time. Or else, the titles evoke, as in FLORA, an association which is also suggested by forms seemingly growing out of another dimension on their own. West's conceptions (of art) do not remain rigid. They have sensing tentacles which they use to feed on any thinkable environment. The crowning glory of West's creations coils its way autonomously, follows its own rules, has roundings instead of teeth and waits eagerly to sever spaces distorted by bias along unpredictable lines, mutating into yet another sculpture.
www.presenhuber.com