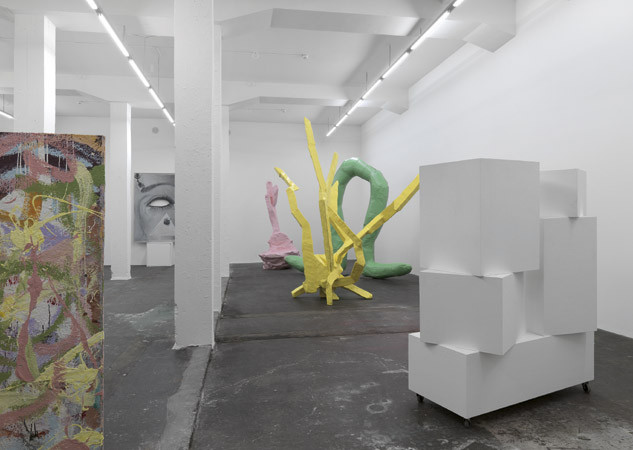 Galerie Eva Presenhuber is pleased to present “Asymmetrische Kunst” (Asymmetrical Art), an exhibition by Franz West. The artist, born in Vienna in 1947, has long come to be internationally regarded as one of the crucial figures of contemporary art. West started his artistic work within the milieu of the Viennese art scene, then characterized by its ‘actionist’ movement, whose interest in physicality and the psychological aspects of experiencing art West inherited and continued to develop in different directions. At the same time, he clearly turned away from actionism by superseding its seriousness and aggressiveness with an attitude of ironic distance. Yet, what determines West’s approach even more is the fact that over the years, he has incessantly examined, expanded and irrevocably changed the notion of sculpture.
The “Passstücke” (Adaptives), which West first showed in 1980, laid the foundation for the sculpture as an object of participation. In fact, West’s sculptures are in no way independent, finished works. It is only through interacting with the viewer that a sculpture finds its completion and fulfills its potential. This interaction may take place both on a physical and intellectual level. The idea of actually ‘using’ the works of art, first expressed in the “Passstücke”, was further developed in the furniture that West began to produce in the 1980s. What is to be worked out, in the case of the former, by means of absurd gestures and improvised flows of movement, can be achieved with the latter by taking a break and reflecting (up)on the pieces of furniture. The objects, which Franz West describes as “legitimate sculptures”, reach their completion through the exploration of ideas and chains of associations that are triggered in the visitor’s mind the instant he is looking at them.
Using, meditating upon, and resting on West’s pieces together constitute objectives of an art that juxtaposes its concreteness and abstraction with the viewer and his surroundings. In West’s environments, where different groups of works are assembled to be experienced as a whole, all these aspects may coincide in the context of an exhibition. West’s outdoor sculptures, too, have a potential for both intellectual and physical participation. While the “Passstücke” and “legitimate sculptures” mainly consist of plaster, polyester, and papier-mâché, the construction of the outdoor sculptures that West has produced since the mid-nineties – at first using sheet metal, then aluminum, and later epoxy resin – allows various participatory possibilities for their use. Without the formal restrictions typical of the pieces of furniture, objects with names such as “Patzen”, “Sitzwuste”, “Qulze”, or “Gartenpoufs” come into being and describe shapes that know how to involve both mind and body of the viewer.
After Franz West’s last show at Galerie Eva Presenhuber in summer 2006, which consisted of a large group of models presented on the premises and which featured three monumental outdoor sculptures in the public space of Zurich, the artist now returns to the gallery with a new group of works.
www.presenhuber.com