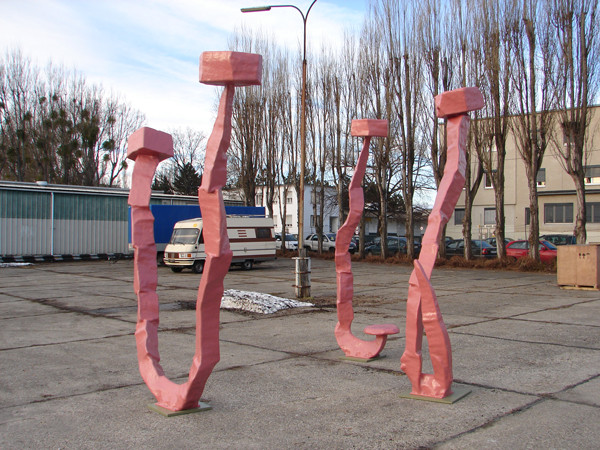 When Franz West gives the title “Stonehenge” to one of the works on show at Galerie Eva Presenhuber’s new exhibition space, then this reference to a millennia-old site of cult worship whose concentric stone circles are also said to have been used for astronomical calculations is meant to subvert the concept of sculpture and its monumental endeavours on several levels. Calculation itself is at stake here. For whether coordinates are used to define space in absolute terms, rendered everything contained within it locatable, or whether artworks are misunderstood as topological markings that open up or fill a space to be gauged according to the value judgments of an art market: Franz West’s assemblages and structures, which appeal to the senses while remaining unclassifiable, struggle against this. With the exhibition title, “Defined Space”, he pokes fun at a pronouncement of Martin Heidegger’s: “The sculptor defines space”. Against the pathos and banality of such generalizations he deploys a simple drawing of a geometrical form marking the place on the floor occupied by chairs whose orientation is decided by the viewers and users before they sit down and allow their gaze to drift off into the undefined distance. For it is there that West’s artistic efforts are focused. Rather than being obliged to adopt a reverent stance and decode the work, as some conceptual art demands, viewers are meant to move naturally. But the artist’s approach does not reflect naively unfulfillable freedoms. The Situationist device of giving chance a chance is characterized by allowing the constraints imposed by the specific time and space where the work takes place to play a part. It is not a matter of representing an idea or concept that becomes legible and comprehensible with the help of an isolating framework. Franz West’s idiom, combining expression with abstraction and embracing associations, permeates his medium and takes everything into account: the choice of material, the position of the joins, the eye-opening, out-of-the-ordinary colour schemes, the way fragmentation is rendered visible. This rules out monumental bombast and drastic perspective, which leave the viewer hostage to a representative function, as it rules out any flirting with potential sales, which obscures the art. And that is already taking things too far: when asked about his artistic philosophy, Franz West speaks of creative sloppiness, of a puzzle he’s not interested in solving, and – in what may be an attack on Heideggerized structures and (mental) spaces – of the (customary) ban on nothingness.

When, early in his career, Franz West decided to not just work with the two dimensional, but by way of sculpture rather to allow himself (and others) a world that was to be usable and available to experience in every sense, the first so-called «adaptives» emerged, sculptural forms that anyone can bring into relation to his or her own body.

With his adaptives, Franz West first formulated a characteristic that would became foundational for his further work. He did not seek to create as an artist an autonomous and closed validity; instead, the beholder and user could complete the work with the acts he or she undertakes. Quite in this sense, Franz West once said, «The death of the author is a theme from the time of Pericles, being a sculptor then meant that ideas flowed through the individual. They were passive instruments that served to create sculpture.» (1)

As a logical continuation of these ideas, the first furniture pieces emerged, which made it easier for the beholder to find a way of approaching the works. While they could actually be used as objects in private space, in an institutional space they took on a puzzling status: are they art or furniture?

The «legitimate sculptures» which emerged after the adaptives deny the beholder any direct physical contact. These works, which are placed on a plinth or are no longer easy to handle simply because of their size, «do not want to be understood as objects of a contemplative beholding at rest in themselves, but are in turn primarily offerings toward a dialog that is now to take place primarily on a conceptual level.» (2)

Since the mid 1990s, Franz West has been working on large format external sculptures, initially using iron sheeting later using aluminum. For an exhibition at Innsbruck’s Schlosspark Ambras, a whole series of works emerged that are particularly simple in terms of form: West describes the «Wuste», «Qulze», and «Qwertze» as «body shapes». Due to their low height, the «Wuste» especially can be seen as an invitation to sit, and thus can be seen as a link between the adaptives and the furniture. Entirely abstract in form, they can still be subjected to a standard function.

In the exhibition «Der definierte Raum», Franz West combines works from each of these groups: Here, unlike most works by the artist, a three-part chair installation shows clear and strictly defined outlines: several West chairs are placed in a circle, a square, and a triangle. Each of the chairs demands to be used, and thus becomes a constitutive element of the work. Where the purely elementary forms suggest an almost hopeless situation, the user is given the possibility of a creative response. Chairs can be moved, new constellations are constantly made possible.

In the work «Stonehenge», too, Franz West impressively explores the described mechanisms of communicative and interactive practices.

Two new large format works created for outdoor spaces in 2009 attest to Franz West’s intense engagement with the philosopher Ludwig Wittgenstein. Already in 1985, West created a model with the Wittgenstein quotation, which takes a scribble from his «Vorlesungen über Ästhetik» as an example of meaninglessness and randomness, translating it to three-dimensional space as a «ribbon».

The legibility of these new works is multifarious, they too can be used by the beholder, just like the adaptives, be it is as a form of seating or as a mind game. In conversation with the philosopher Peter Keicher, he points to a possible reinterpretation of a quotation from Wittgenstein. Could the idea of whether a statement is then understood in itself or that a statement only becomes a statement in that it is understood not be applied to the works of Franz West? In that an adaptive is used as such, or only becomes an adaptive in that it is used? (3)