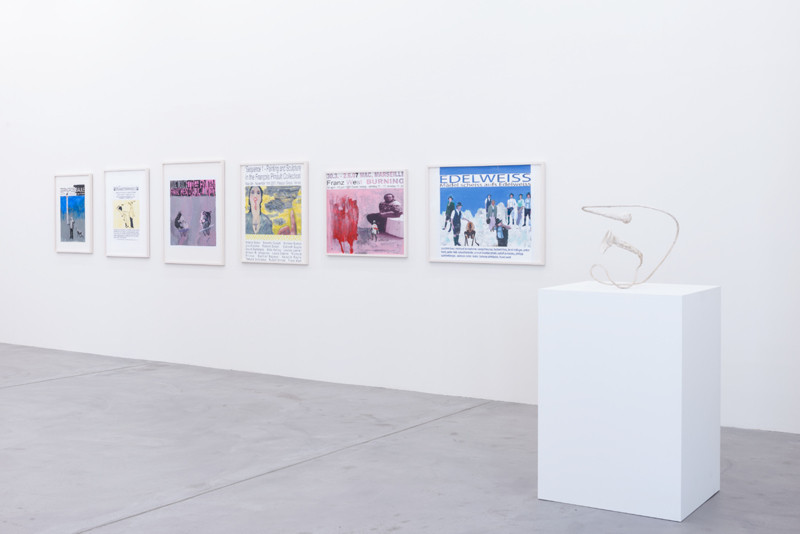 The Galerie Eva Presenhuber is pleased to be able to present a one-man show of the Austrian artist Franz West, who died in 2012.

The present exhibition is the tenth since Franz West and Eva Presenhuber began working together and the first since the artist’s death. It deliberately makes no claim to being a comprehensive overview. but rather concentrates on three groups of works: Passtuecke, posters designs, and papier-mâché sculptures. Works made available by the Franz West Foundation are supplemented by selected pieces from European and American private collections.

The relationship between Franz West and Eva Presenhuber began twenty years ago in Zürich. In 1995 West exhibited in the Galerie Walcheturm—Telephone Sculptures, Seating and Lying Opportunities, May 19–July 8—where Eva Presenhuber worked as gallerist from 1989 to 1997. The exhibition Colabs and Combos followed two years later (May 16–July 12, 1997). Eva Presenhuber later entered into partnership with the Galerie Hauser & Wirth, where she presented Franz West in the one-man show Of the Finest (November 6–December 18, 1999). Additional exhibition projects followed: Outdoor Sculpture (May 25–July 27, 2002) and Anchor, Rope, and Lifesaver (May 24–July 26, 2003). After the founding of the Galerie Eva Presenhuber, West presented Models et al. (June 10–July 29, 2006), Three Sculptures Outdoors (July 11–September 10, 2006), Asymmetrical Art (March 15–May 10, 2008), and The Defined Space (April 15–May 21, 2011).

The basic theme in Franz West’s works is communication and interaction. In the early 1970s West first presented his series of Passtuecke for the human body. Simple wearable structures made of papier mâché and plaster that function as extensions of limbs. According to West, the Passstueck represent neuroses or prostheses. The viewer becomes an interactive dialogue partner, which lends the sculptures a completeness in that the artwork takes on meaning through its communicative function. Some of the exhibited Passstuecke from the ’70s and ’80s are supplemented by videos in which people were filmed while wearing them.
Logically, West accorded a greater importance to the presentation of the works in the exhibition space.

Like my earlier adaptives, these designs are not merely to look at, but meant to be handled (for presentation, the presentation a result of interaction with the owner or curator), Passstuecke for the spaces in which they are presented. (Franz West)

For many of his shows West designed a poster, turning it into an autonomous picture with painting and collage. The poster design refers to the exhibition and is at the same time a part of it. The name of the venue, title of the show, the date and other relevant information become the subject matter, and can be understood, like the adaptives, as a kind of interactive intellectual prosthesis. The viewer becomes a part of the picture subject, and is thus assigned an active role by the artist.

A significant aspect in the work of Franz West is his handling of his materials, whether in the collages and poster designs, which always bear clear traces of his actions, or in sculptures and objects made of papier mâché. The creative process is always visible. Nothing is smooth and perfect; the work takes on an incidental, frequently even experimental quality.

To Franz West sculpture was not a stationary block imbued with an aura, but rather a hinge, or wedge intended to produce a new connection between artist and public. For him art was free of the heraldry of the bourgeois format. Accordingly, for the papier mâché sculptures he converted stools, wooden chests, and tables into elements of the works of art, thereby incorporating into the work the notion of presentation in a direct and inextricable manner.

For his medium-size, abstract sculptures he employed papier mâché, plaster, wire, wood, straw, and god knows what else. To top them off he would splash on thick layers of white pigment: a mixture of the sketchlike, half-living, half-dead figures of Giacometti, the bulbous constructions of the early Claes Oldenburg, the ensembles of crushed wreckage of John Chamberlain, Cy Twombly’s strange, white, anticlassical sculptures, and added to these came West’s own contempt for the pretention of high culture. (Jerry Saltz on Franz West. Obituary from July 27, 2012).
www.presenhuber.com