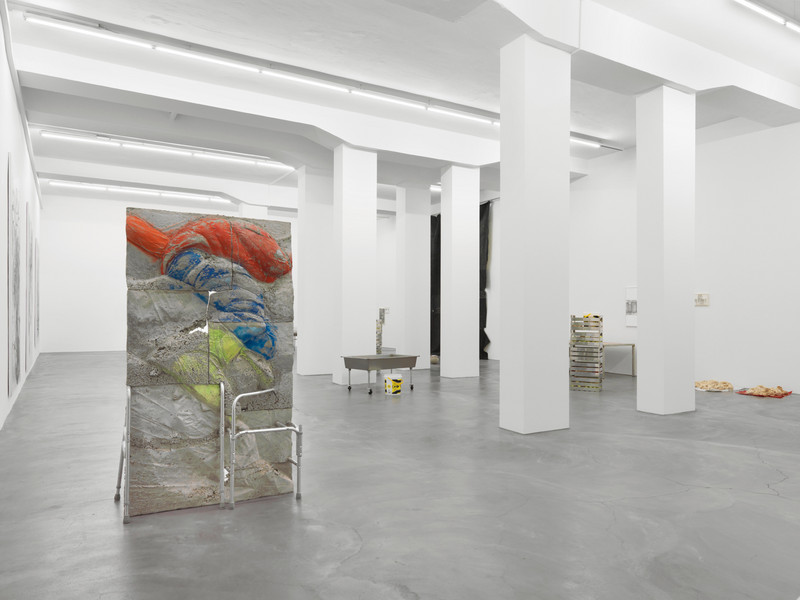 Galerie Eva Presenhuber is delighted to present the four international artists Justin Matherly, Oscar Murillo, David Ostrowski, and Tobias Pils in a group exhibition. The exhibition features new works that provide glimpses of the artists’ current artistic production.
The four artistic positions could not be more different, however the idea for the show and its realization were meant to explore the aesthetic of the dissimilar, contradictory, and different evoked by such variety. The point was to achieve identification by distinguishing between the exhibited positions, each of which is convincing thanks to its singular quality, its presence, and its individual expressive means. Any notion of coherence was thus permanently undermined, and replaced by one of reciprocal commentary.

Justin Matherly is known for his large-scale sculptures in cast concrete that refer allegorically to sculpture from Greek and Roman antiquity. Parts of crutches and walkers combine with shapes cast in concrete that curve around the metal like knots. Using soft materials Matherly creates a flexible mold, the cast of which is then reworked in a second step. This forces him to once again study the negative of the desired form. Without being shown what the original images might once have meant to represent, as viewers we see ourselves confronted with extremely compressed and degraded shapes, many of them as though limbs of amputated and beheaded bodies. The walkers mounted beneath them as permanent supports for the sculptures suggest the possibility of the deterioration of our own bodies, which are at the same time potentially liberated thanks to the mechanical aids. Matherly describes this ambivalence between freedom within the bondage and limitations of one’s own body as “perpetual motion.” “It all connects to metempsychosis, which is a Greek theory about the reincarnation of the soul after death. In my work, there’s a breakdown of forms into other forms—nothing ever really stops. The walkers can also help on a practical level by making the sculptures portable.”

At the age of ten Oscar Murillo moved with his family from La Paila, a small mountain village in Colombia, to East London. Years later he describes the move as an “astonishing cultural displacement.” Themes such as distance, displacement, and movement are pivotal in Murillo’s artistic practice and strategy. The manifestation of the body in transit and precise questioning of such issues as migration, trade, and globalization characterize his work—on the canvas, in his actions, in the studio, and beyond. As an artist, Murillo functions as a middleman between various demographics, and facilitates the encounter between two worlds that would not normally meet in the same way. “What’s interesting to me is how cultures collide—what’s important is functionality and for things to have the same standing,” he explains. “I am trying to obliterate hierarchies.” Despite his multidisciplinarity, painting can be seen to be his core concern. He frequently uses a broom handle instead of a brush, and generally lets a canvas lie on the floor for a month or two before it is stretched so that it gathers ‘information’, what the artist refers to as the ‘DNA of the studio’. Murillo’s paintings are thus filled with archival traces of past actions that are prominently recalled in words or numbers—“work,” “yoga,” “poker,” “corn,” “3”—or, as mentioned above, in the form of pieces of studio detritus—crumpled drawings, threads, adhesive pigment, copper, or dust.

David Ostrowski’s large-format works frequently strike us as daringly, almost provocatively empty. But to Ostrowski emptiness and nothingness are not merely abstract philosophical concepts, but rather a deliberately cultivated artistic gesture and strategy, as well as a complex way of grappling with material. “Ultimately I try to switch off this painterly knowledge. I enter the atelier and forget everything. I suppress pressure and ambition. I simply paint, and then the works happen somehow. And again and again I forget how I painted pictures before,” he assures us. In this way Ostrowski tests boundaries, and risks producing questionable pictures. His processes are only seemingly disoriented, however; the artist clearly cultivates methods by which he provokes coincidence and tempts the unexpected. This is above all manifested in the works of his “F” series—“F” standing for “failed.” David Ostrowski’s works are layerings of multiple paint and material planes that are collaged on the canvas, overpainted, and promptly torn off again. Occasionally they bear the traces of dirt and footprints. He is also interested in the immediacy and irrevocableness of the use spray paint, which he employs as an artistic intervention on the canvas. In this way pictures are produced that retain a high degree of uncertainty, are cheerfully hermetic in a grungy way, and virtually defy categorization.

What is interesting about Tobias Pils’ work is the mystery of confusion. In his large-format pictures we are confronted with ambiguous geometric shapes, grids, and structures that combine into configurations that leave objectivity only guessed at. Pils’ objective references elude positive legibility, they seem like dream fragments, snippets of memory, or realistic set pieces in which we think we can make out landscapes, figures, and objects. Then there’s the modulation of gray tones that create in the picture a mood that is neither gloomy nor cheerful. Pils’ gray, like his expressive shapes, constitutes an entity of its own, and stands in no direct relation to nature, but simply points to its own mutability. By evoking associations, allusions, and ephemeral coherencies, Pils’ works function as appropriate referents for the inscrutability and chaos of life. They are works that intentionally elude anything explicit and represent a permanent avoidance of superficial solutions. “I don’t believe in solutions,” the artist says, “that’s why I try to forget all pictures when starting a new one.”

Justin Matherly (born 1972) lives and works in Brooklyn, New York. This past spring Paula Cooper Gallery presented his solo show and in 2013 his exhibition “All industrious people.” His works were also included in the Public Art Fund exhibition in City Hall Park in 2012, in the Galerie Bureau in 2011, and in the Sculpture Center in New York in 2010.

Oscar Murillo (born 1986) lives and works in London. In 2013 the South London Gallery presented the artist’s first major solo show in Great Britain. During a five-week summer residency at the Rubell Family Collection in Miami in 2012 he created works that were exhibited in that same year in his first solo show in the United States. His works and projects have also been seen in the Showroom MAMA in Rotterdam in 2013 and in the Serpentine Gallery in London in 2012. For his ongoing project “Frequencies,” a collaboration with family members and the political scientist Clara Dublanc, Murillo visits schools around the world and installs canvases on schoolroom desks. The canvases are meant to reveal the pupils’ creative and critical thought processes and capture them visually. The project thus focuses on universal cultural discourses and provides insight into different social communities.

David Ostrowski (born 1981) lives and works in Cologne, and from 2004 to 2009 studied painting under Albert Oehlen. Just now his solo show “Just Do It” is on view in the Fondazione Sandretto Re Rebaudengo in Turin. Other solo shows this year were “Emotional Paintings” at Peres Project in Berlin and “Das Goldene Scheiss” in the Galerie Almine Rech in Paris. In 2013 London’s Simon Lee Gallery presented his works in solo show “Yes or let’s say no,” and in 2014 in the framework of the group show “Walk the Line” in Hong Kong.

Tobias Pils (born 1971) lives and works in Vienna. In 2013 the Vienna Secession presented a solo show with the identically named title “Secession.” His works have also been seen at the International Studio & Curatorial Program (ISCP) in New York in 2014, as part of a group show in the Jack Hanley Gallery in New York in 2011, and at the NAMOC Museum during the Beijing Biennale in 2010.
www.presenhuber.com