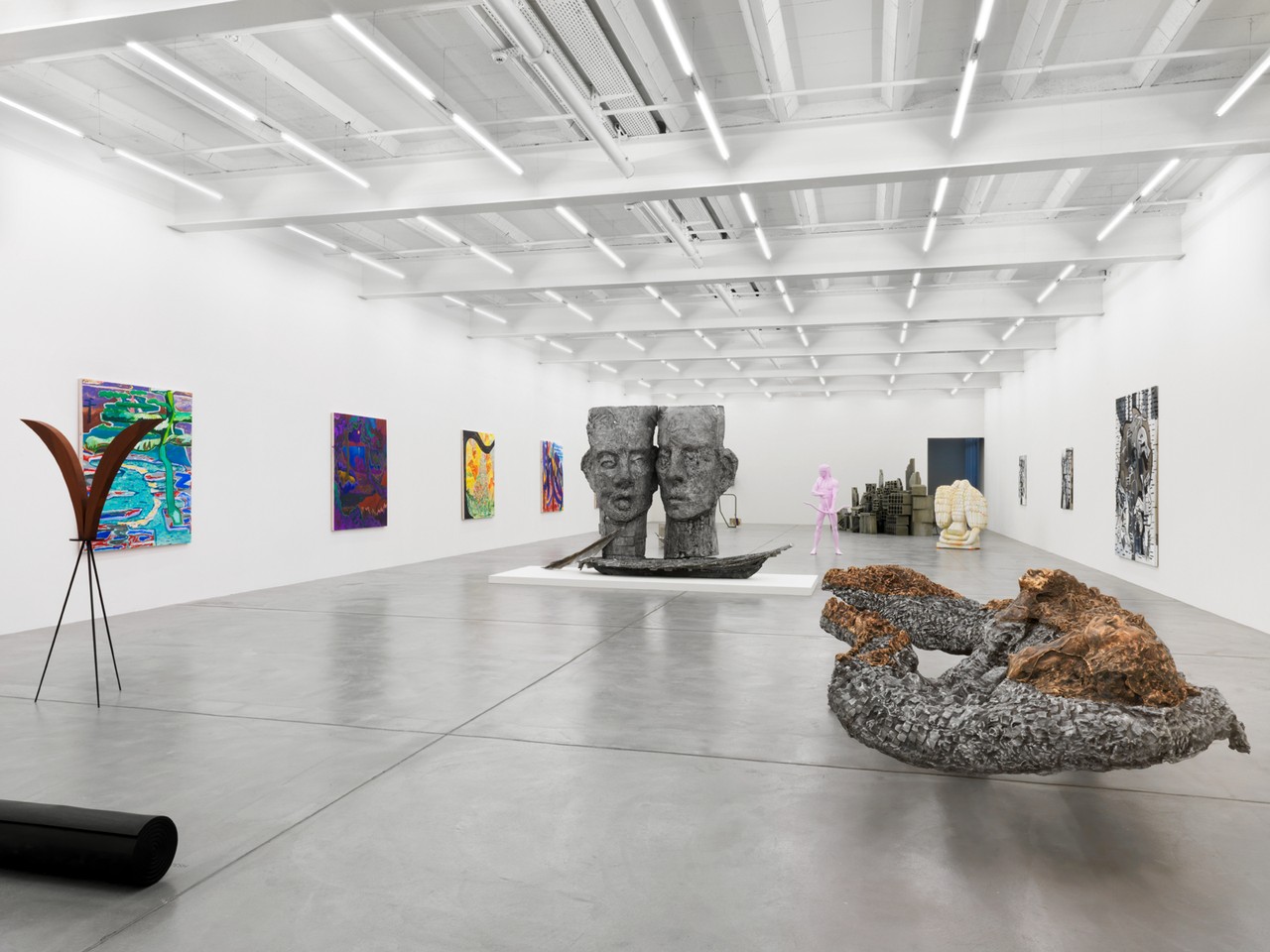 Galerie Eva Presenhuber begins the year with a group exhibition featuring works of nine artists from different countries and generations working in different mediums and materials. Highly heterogeneous in terms of approach, materiality, and media, the works are connected by kind of archeological interest in excavating layers of a certain field, be that implications of the subconsciousness, invisible parts of a certain culture or forgotten yet influential parts of art history.

The French artist Jean-Marie Appriou (born 1986 in Brest, France) shows two scultpures cast in aluminium, depicting large faces, a crocodile and a human body that seems to lie on the animal's tail. Appriou's sculptures appear archaic, evoking mythology and forms of primitive art. Yet he uses the very contemporary material of aluminium and doesn't refer to commonly known archetypes, but instead forms new ones himself. Appriou creates his works’ handling material such as aluminium or clay in a way drawn from his own experience, resembling a modern-day alchemist's work. In doing so, he establishes his own mythology, alluding to existing forms while juxtaposing them with his own material approach.

Martha Atienza (born 1981 in Manila, Philippines), daugther of a Philippino father and a Dutch mother, bridges not only two cultures but also the gaps within these cultures. In her recent work, she studies how art can create dialogues and thus build communities. In Anito, Atienza documents a christianized animistic festival on Bantayan Island. The festival's name, Ati-Atihan, literally means "to be like Aetas", the indigenous group the festival alludes to. Blending vernacular traditions, christianity, recent events such as the super typhoon Yolanda, and the structural realm (such as labor migration), the festival participants create a carnivalesque version of the everyday.

Using cinematic strategies, Dora Budor (born 1984 in Croatia) explores how film both reflects and creates reality and the way we perceive it. In her sculptural work, the artist often reenacts film scenes, bringing their bodily effect to the 3D sphere. In temps mort, Budor refers to an object shown in Antonioni's black-and-white movie L'Eclisse: A pile of rubble on a construction site that could be taken as a model of a city from afar, watched by the character Vittoria, who appears gigantic in comparision to the imagined city model. Temps mort responds to it's cinematic size in relationship to Vittoria's body by featuring painted shadows (like in the famous set of Cabinett of Doctor Caligari) which in turn respond to the light in the movie: They blend with the real shadows created by the gallery light, turning the viewer into a second Vittoria, collapsing the two different times of movie and reality into one.

Shara Hughes (born 1981 in Atlanta, Georgia, USA) states about her paintings that they are created only from the inside and in the very moment of painting. Refering to them as psychological landscapes or invented landscapes, her frenetic colors and vibrant brushstroke, ranging from monocromatic fields to harsh strokes and dots, show how the artist's practice is structured by art history as well as by contemporary peers. Fin de siècle styles such as Fauvism, Art Noveau and German Expressionism can be found in her work alongside traces of contemporary painters such as Carroll Dunham, David Hockney (a series of her paintings and drawings function as analog versions of his iPad drawings) or Sanya Kantarovsky. Thus, the artist lays bare a paradoxical subjectivity consisting of layers that create a vibrant utopian now.

In her work, Iman Issa (born 1979 in Cairo, Egypt) is occupied with how institutional and canonical processes form memory and history. For the show, the artist (whose practice also includes fiction and essay-writing) presents three new objects from the ongoing series Heritage Studies. Therein, Issa presents artifacts labeled the way a museum would do, which, although they have no reference, appear oddly familiar. Including the wall-mounted museum sign and shown among the other works in the gallery, Issa's three objects radiate the question what kind of artifacts can possibly be presented in an art or museum space.

In his sculptures, Justin Matherly (born 1972 in West Islip, New York, USA) reinterprets both common and uncommon ancient forms. They are cast in concrete which is poured into molds made of PVC tree-watering bags and other flexible material and then just roughly formed, in order to keep the traces of their production process. Matherly often presents his sculptures on pedestals constructed in part from medical supporting devices. In bird, he refers to a sculpture found in the backyard of the Istanbul Archeological Museum. Matherly interprets this prehistoric eagle, which features shields instead of feathers and a serpentine mass at its base, as one of Nietzsche's or Zarathustra's animals, thus linking antiquity with modernity and bringing both to the present.

Tobias Pils' (born 1971 in Linz, Austria) paintings Wiener Vögel (Birds of Vienna), depicting half-man-half-bird figures, are a nostalgic search for the local realm of his home. The five paintings of different sizes – Pils refers to them as a family rather than a series – allude to topics such as birth and sexuality, all situated in the painter's everyday life in Vienna. While projecting imagery originated from a dream logic, Pils creates compositions that oscillate between personal and general. Wiener Vögel is not only inhabited by bird-like figures but also by abstract forms – sometimes highly energetic, sometimes quietly present in the background, they serve formal questions while at the same time appearing as something left unspoken.

Magali Reus (born 1981 in Den Haag, Netherlands) shows two sculptures from her Leaves series. Formally reminiscent of padlocks, yet inflated to a just uncomfortably larger scale, they have been constructed as densely decorative forms. Comprising of multiple levels of engineered metals, plastics and cast components, these works use the calendar as a model for repetition and speed. Graphic notations suggestive of days of the week, numbers and seasonal implications are all housed within a larger enveloping casing.
The floor-based work Mt. Lugs features a metal tubular frame, onto which a curved fiberglass shell clad in layers of fabric of processed leathers and textiles is mounted. The soft materiality of the leather and shape of the work clearly references a body’s contours in motion (albeit human, animal, or technological) however this body is anchored and immobilized; a ghostly presence animated by the sprawling details unfolding on its skin.
Reus’ work focuses on translating a familiar object or image into sculptural forms that are more frustrated and collapsed. Through this process of transformation, the object disposes of its expected purpose of function and is allowed to perform a different image of itself.

Yves Scherer's (born 1987 in Solothurn, Switzerland) work is situated at the borders of digital/analog, private/public, reality/projection. He shows a sculpture depicting the actress Emma Watson, whose body merges into a mermaid's tail, holding a butterfly on her hand, next to a pink, naked sculpture of Orlando Bloom as actor of the character Legolas in the movie Lord of the Rings. The sculptures are flanked by a lenticular print (wiggle picture), depicting three photographs of Emma Watson found on the internet, giving an overall impression between kitsch and religious icon. Using classical sculptural materials as well as modern ones from the spheres of fashion and design, Scherer's works bring the realm of the internet, with its nude pictures of celebreties – sometimes leaked, sometimes poorly photoshopped – to the real three-dimensional world.
Tillmann Severin
www.presenhuber.com