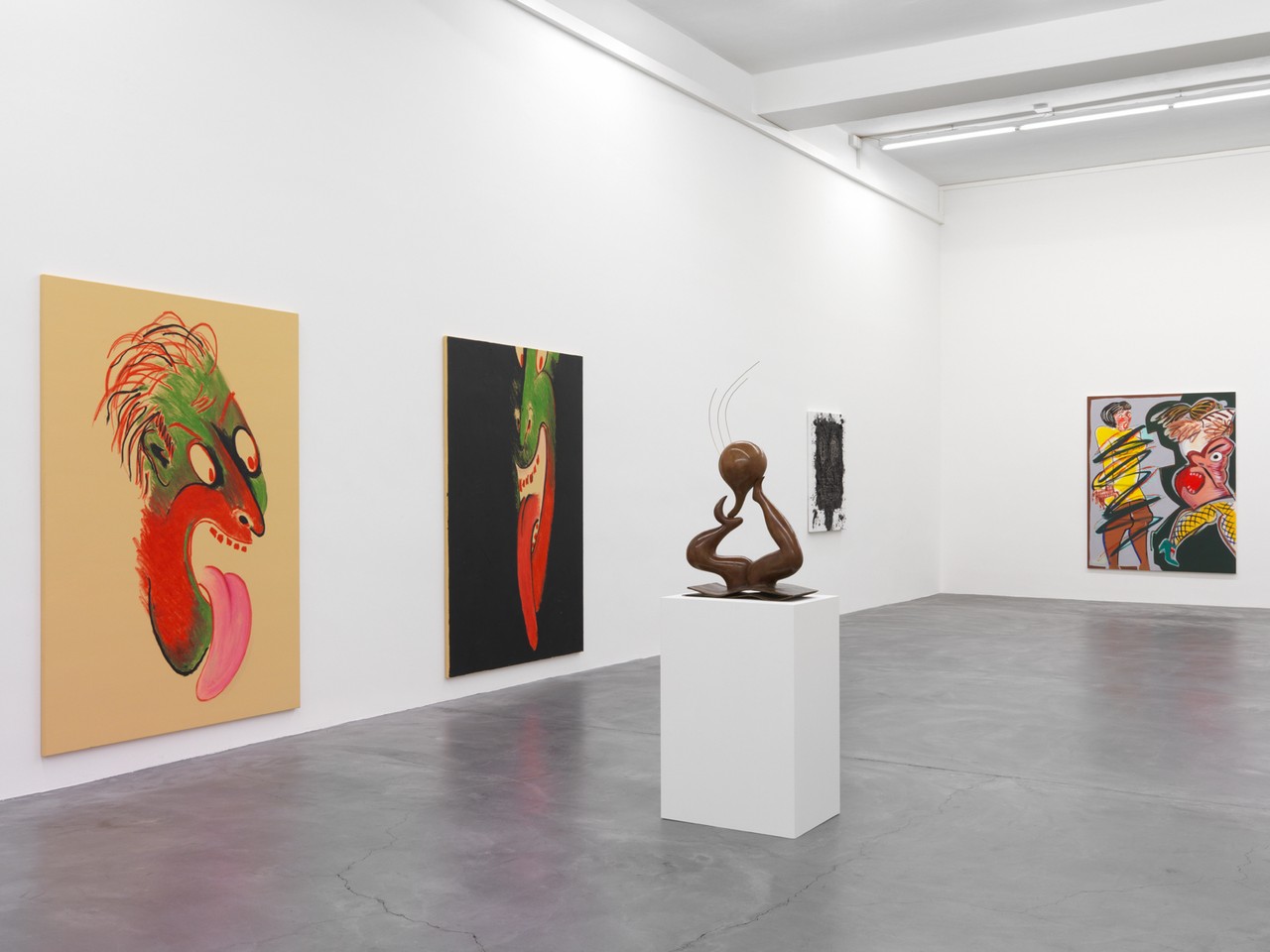 Group Show, Inside Out
installation view
GROUP SHOW
Inside Out
16 April – 21 May 2016

INSIDE OUT features the work of ten international artists, the majority of whom is currently living and working in New York. In their respective oeuvres, the artists portray characters and character-based imagery as they all share a tendency to return to figuration and representation. The works in the exhibition, most of them specially commissioned, dwell upon literary and comedic tropes, in particular the grotesque and the cartoonish. Resorting to metamorphosis, they expose the workings of the subconscious with its darker undercurrents of social and political issues, communicating ideas of class structure, gender identity, race, capitalism, consumerism and self-doubt. We peek into the artists’ own concerns and reflections as they transform their characters from the INSIDE OUT, through the mechanics of portraiture and auto-portraiture.

The artists explore a range of subject matter by capturing and reshaping visual instances from their immediate environments, using a range of techniques, such as painting, drawing, sculpture and film. They not only draw inspiration from their experiences and personal history, but also from their imagination. Some have a more intuitive way of working, while others look for their source imagery directly in the world of cartoons and animation. By means of comic stylization, grounded in reduction and caricature, these artists are able to make humorous, yet not immediately discernible, references. They express themselves in a way that is, although enigmatic, legible in its underlying social realities, political concerns and gender relations. We oscillate between the global level of these universal issues and the individual level of each artists’ expression.

The works present characters that challenge the traditional definitions and limits of gender. For example, Camille Henrot’s hybrid figures manage to humorously destabilize power structures while caught in absurdist scenarios. Conventional notions of masculinity are challenged in Tala Madani’s work, while Catherine Czudej presents a sardonic take on the dominant figure of the male sculptor. Ella Kruglyanskaya redistributes the dynamics of power through her paintings of women, yet scenes that are seemingly familiar quickly unravel into absurdity and satire. Jamian Juliano-Villani and Michael Williams intentionally create confusion in deciphering the narrative within their paintings and resist straightforward interpretation. A tension pervades the works in the exhibition as several of the artists tackle issues with an increased emphasis on self-awareness, and allude to personal and private struggles with one’s own identity. In his work, Rashid Johnson investigates the relationship between the black experience and anxiety. Interested in questions of selfhood and self-image, Calvin Marcus’s and Ebecho Muslimova’s self-portraits present respectively, an image of the devil, and Muslimova’s alter ego, Fat Ebe. The works stare back at the viewer, as in the case of Wyatt Kahn’s imposing mouth, and invite the viewer to reflect on their thematic enigmas and conceptual ambiguities.
www.presenhuber.com