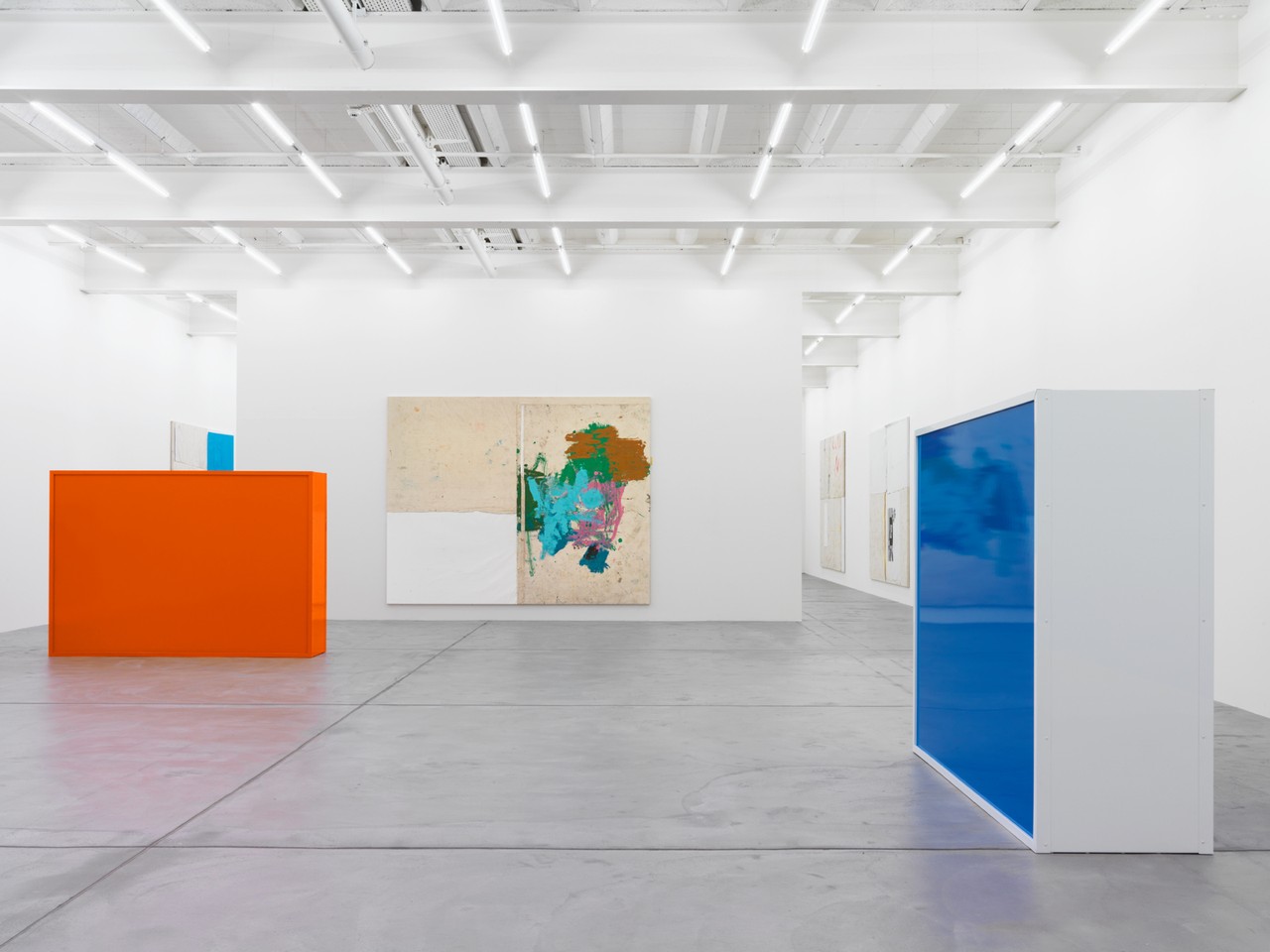 In Joe Bradley’s sculptural work, there seem to exist two opposing ways that, in terms of their effect on the viewer, couldn’t be more different from each other and yet give the impression that they unite two imminent art-historical standpoints: On the one hand, there are open-form, figurative bronze sculptures on pedestals, like they were on view in his first solo exhibition at Gagosian Gallery in New York. In their form and manner, these works can be perceived as both following and continuing Bradley’s early paintings in an archaic-cartoonish style (Schmagoos). On the other hand, there are closed-form minimalist sculptures, which are to be classified as part of the tradition of his “Modular” Paintings. These cubic, man-size sculptures, some monochrome, others bicolored, are primarily characterized by their significant and emblematic presence. Similar to the black monolith in Stanley Kubrick’s “2001: A Space Odyssey” (1968), Bradley’s colored monoliths seem to repress the surrounding space and powerfully face the viewer. At the same time, the vibrant and comic-like colors impart the works a playful ingenuousness.

The comparison of both types of sculpture in Bradley’s work appears exemplary of the development of sculpture since the modern age in general. His bronze sculptures breathe the spirit of both primitive and modern art. In contrast, the here exhibited aluminum and Plexiglas sculptures formulate the constructivist alternative. The narrative titles of these woks don’t appear to have a direct connection to the works themselves and point to a sculpture’s character as an intellectual projection surface. The sculptures can be presented both in- and outdoors. Parallel to this exhibition, Joe Bradley will present a new outdoor-sculpture on the Cycladic island of Antiparos in Greece.

What is formally separated in Bradley’s sculptural work is unified in his painterly work. Thus, it forms an arc of suspense between sculpture and painting. Joe Bradley’s versatile painterly oeuvre is based on a complex visual language. His groups of works vary between primitive iconology, gestural abstraction and a radical, hardedge attitude. The nine large-sized paintings of the exhibition are part of this tradition and unite elements of the previously separated groups of works. They are not painted on consistently stretched canvases, but rather consist of different canvases, which have been sewn together in a collage-like manner, with individual areas that are partly painted and worked on by the artist, partially monochrome colored, or left in their untreated primordial state. Bradley sees this new group as a continuation of the works of his last exhibition at Galerie Eva Presenhuber (2014), where he presented a series of paintings, which he describes as “modular paintings”, or “figures”, which revisits the strategies employed in the earlier works. Each painting was comprised of multiple panels, made of stretched canvases, with some of them creating figure-like shapes whilst some others embodied forms of abstract totems.

With this new body of work Bradley succeeds to enlarge his already very rich oeuvre and vocabulary and to manifest a distinct sculptural character in his paintings.