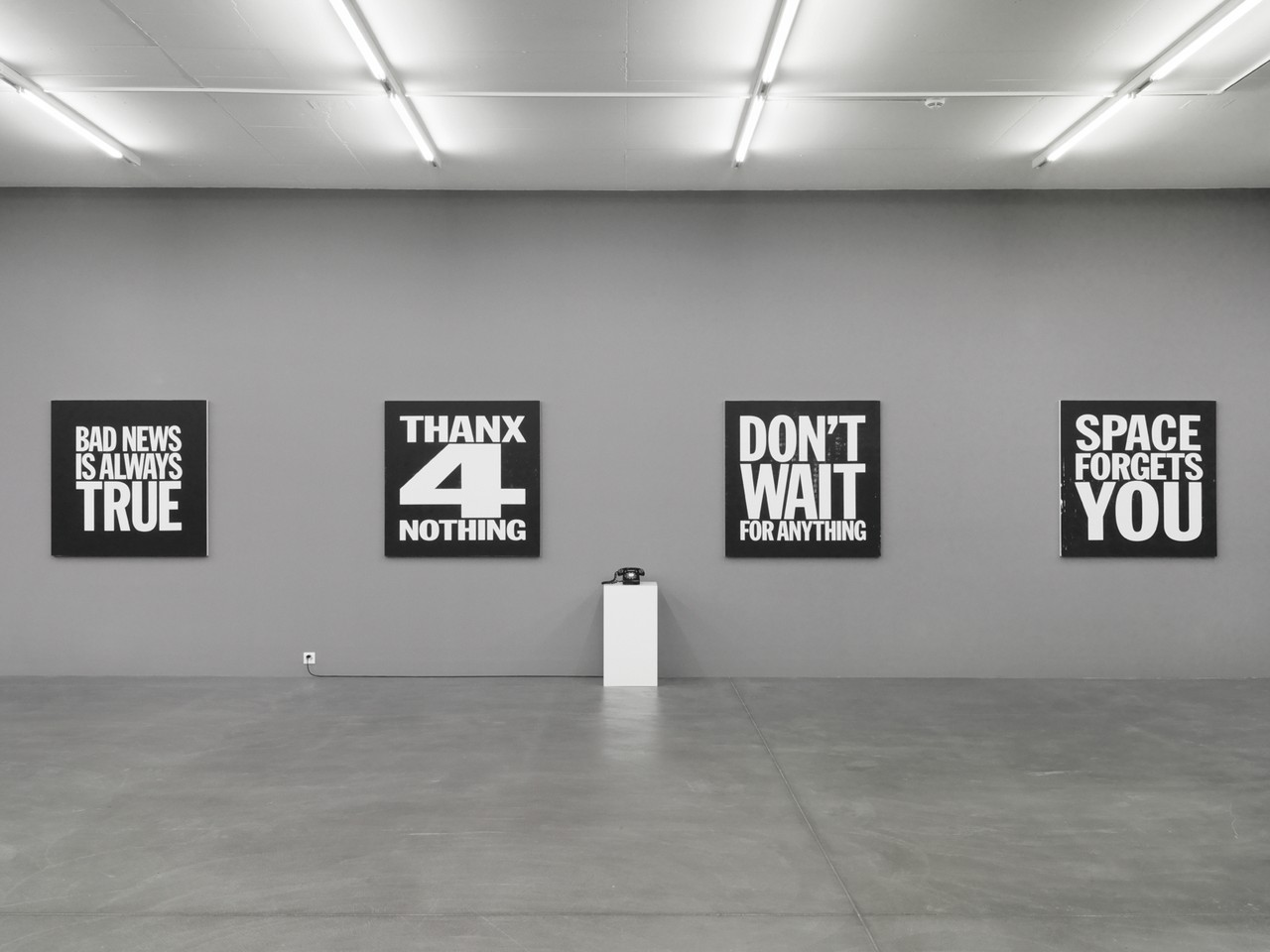 Galerie Eva Presenhuber is pleased to present "space forgets you,” an exhibition featuring works by artist and poet John Giorno. This is Giorno’s first solo exhibition with the gallery.

Since the 1960s, John Giorno has created an extensive oeuvre that expands, moves between and pushes up against the borders of different art forms. No other artist has woven poetry, visual art, sound performance, and dance as succinctly as Giorno, while radically questioning their boundaries and interdependencies. In collaboration with different artists Giorno developed a variety of forms that stretched the limits of what was traditionally considered poetry. In 2016, this intensive form of collaboration culminated in „Ugo Rondinone: I love John Giorno", an exhibition – and work in itself – by the artist Ugo Rondinone at Palais de Tokyo (Paris).

In "space forgets you", John Giorno continues to expand his oeuvre, where new media and modes of representation are introduced and further extend the perceived boundaries of poetry. His poetic language – and the way he presents it –is as unique as the broad vocabulary he employs in his work.

Verses like “LIFE IS A KILLER” or “EVERYONE IS A COMPLETE DISAPPOINTMENT,” phrases originally found in his poems, are transformed into bold, visual works in Giorno's poem paintings. These explosive lines both provoke identification and further contemplation. The starting point of Giorno's poem paintings and his poetic language lies in a revelation he made as early as the 1960s: Poetry, Giorno noted, was at least 75 years behind visual art in its development. While the emerging pop-artists started to find their sources in mass-culture and to integrate newspapers and advertisements into their works, poetry still remained within its established modernist paradigm. John Giorno became friends with the pioneers of pop-art – notably Robert Rauschenberg and Jasper Johns on the threshold of their success – and even lovers with Andy Warhol, for whom he also served as a model in some of his films, such as Sleep.

Consequently, Giorno applied the techniques of pop-art to his own writing. He developed the concept of found poetry and adopted cut-up techniques from William Burroughs and Brian Gysin. About the clarity and power of Giorno's verses – which allow for their visual effect once transformed into poem paintings – William Burroughs wrote in 1992: They work just like the human mind. Through the lingual material of found poetry and the repetitions which are part of Giorno's unique sound, his verses create a déjà-vu-effect: They are so clear and powerful precisely because they employ notions from ordinary life and the ordinary way of using language.

It was also William Burroughs with whom Giorno toured through the United States in the 70s and 80s. Together, they entered the stages of rock-clubs and presented their texts as performances. In doing so, Giorno developed his own way of performing his texts, which diverged from classical poetry readings: Without a piece of paper in his hand, he recites the poems by heart and with his body. The energy of these eruptive performances comes, in large part, from the meditation that he, as a Buddhist, began practicing in the 70s. The French sound poet Bernard Heidsieck, another collaborator of Giorno’s, calls his performances a form of “dancing in place”. With his bodily, precisely cadenced, and always audience-focused performances, Giorno is regarded as a precursor of Spoken Word Poetry and Poetry Slam. In 2008, Rirkrit Tiravanija dedicated a film, Untitled 2008 (JG reads), to the energy that radiates from Giorno’s performances.
Giorno was also among the first artists to create voice-and-sound collages. Together with Bob Moog, the inventor of the Moog-Sythesizer, and sound-engineer Bob Bielcki, Giorno provided a tonal dimension to his texts. From these tonal explorations, it was only one more step to the John Giorno Band which Giorno founded in the early 80s. Working with musicians like Lenny Kaye, Charlie and Adam Roth, Mike Osborne and David Conrad, Giorno employed his texts to create musical compositions and performances. Giorno never sang: His poems and their performances are so rhythmical and muscial that they served as the center for the performances of the John Giorno Band.

Video Works, LPs, CDs, radio broadcasting, and telephones were Giornos answer to the question of how literature can be presented in a world in which people tend to use new media rather than read a book. After a call with William Burroughs in the late 60s, Giorno developed Dial-A-Poem: People could call in and listen to recordings from the network and label Giorno Poetry Systems, which Giorno had founded in 1965. Among the dialable texts were poems by Allen Ginsberg, but also parts from Jim Carroll's Basketball Diaries or William Burroughs' novel Naked Lunch, read by Frank Zappa. Among the texts was also an extract of a speech delivered by Bobby Seale, one of the founders of the Black Panther Party, and the poem Revolutionary Letters by Diane di Prima, which included a practical instruction of how to build a Molotov cocktail. Thus, Dial-A-Poem, which was presented by MoMA in 1970, gained a multilayered political dimension. Again, Giorno’s prescience was clear: His technique of using telephones was subsequently adopted by news channels and banks to spread information about the stock market, weather, and sports.

On many levels, Giorno's work is strongly shaped by his political engagement. For example, he provided money from the Giorno Poetry Systems for lawyers or bail-outs for political activists. In 1984, under the impression of the AIDS crisis, Giorno founded the AIDS treatment project: He visited infected people in the hospital, handed out cash, but also took time for intensive dialogues. Starting with small amounts of money, the project soon expanded and, to this day, provides large amounts of money for the daily needs of people living with AIDS. In his poem "AIDS monologue", written in 1992, Giorno subsumes the spirit of the project in just one line: to treat a complete stranger as a lover or close friend.

About his poems, Giorno states that they are initially handwritten and then typed into the computer, enabling them to become any possible work: Sound collages, prints, paintings, or performances. In the 80s and 90s, Giorno expanded his oeuvre to include video works. He explored new technologies and brought language, writing, and sound performance onto the screen. In "space forgets you," Giorno presents video-sound-works which he created in collaboration with Ugo Rondinone. In 1998, Pierre Huyghe suggested a collaboration with Giorno. The outcome is the film Sleeptalking – a work on John Giorno and Warhol’s film Sleep.

Giorno's work is innovative and provocative in all respects. Many features that constitute his work can also be found in everyday culture. About the internet, Giorno says in an interview: "Everybody works with words now, constantly, so that’s a new form of poetry taking shape which includes lots of other media, lots of other techniques. Just even texting. A brilliant person texting is like a haiku. Everything is minimalist on twitter, where you only have 20 words."

Giorno's work far exceeds classical subjective poetry in the way it works with language, and influenced a great variety of subcultures and movements. It’s not just everyday culture that is a part of Giorno’s work – in today's everyday culture, there is also a lot of John Giorno.