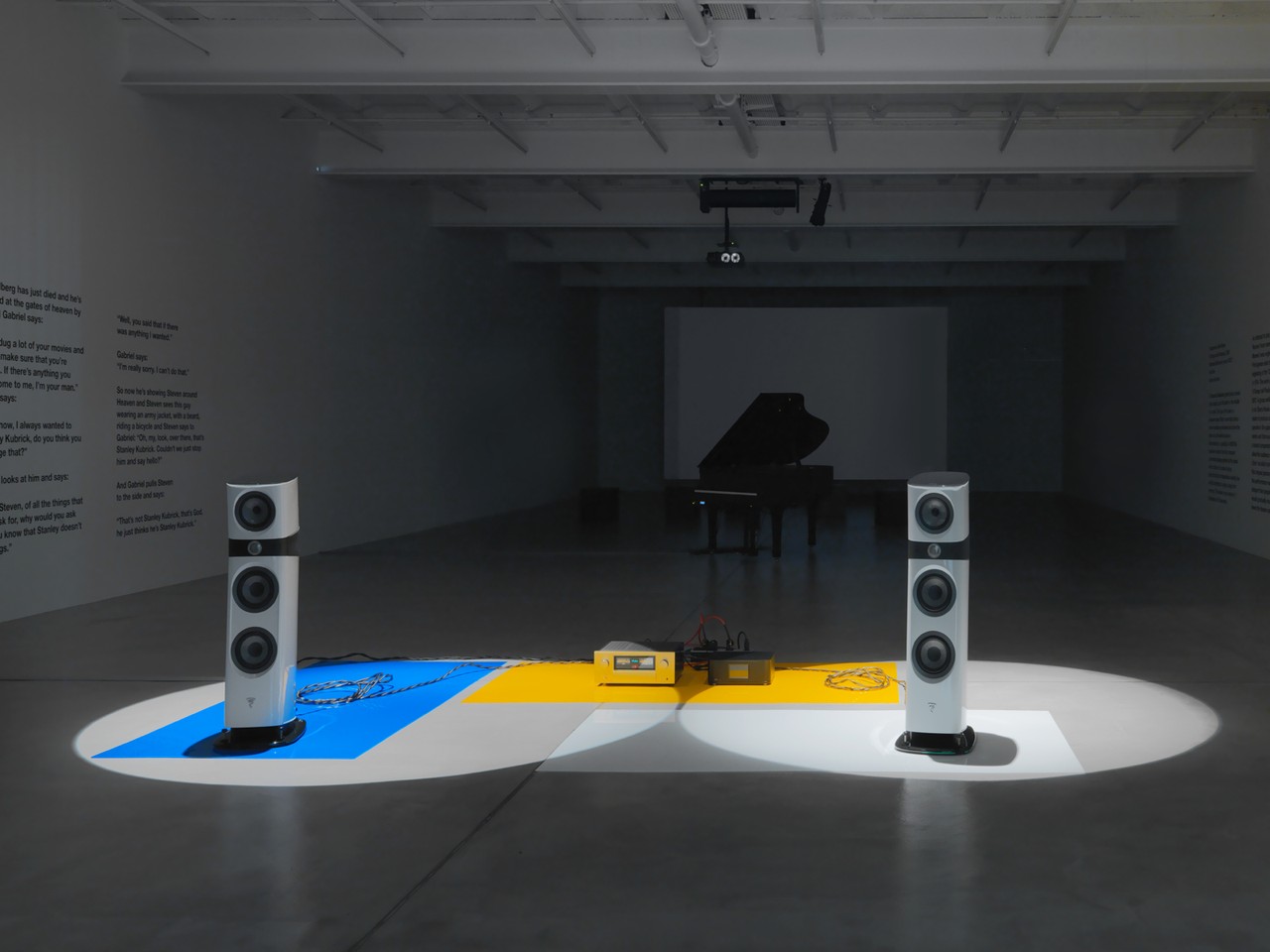 This is an exhibition of interruptions, secondary components and demonstrations. It both kills time and brings closer attention to the conceptual base of the artists work in recent years – namely an interest in production rather than consumption and new forms of work and life.

The exhibition concentrates on works by the artist that involve sound and film. Three structures – two audio based and one video based – are sited in the gallery, each one carrying a selection of works. A control system will allow visitors to experience the content of the exhibition according to a pre-programmed timing sequence. The works will be interrupted as our attention shifts from one structure to another. The production line of the exhibition will be indifferent to the content.

For the last twenty years, a lesser known aspect of the artist’s work has been his involvement with sound and video. Since the 1990s he has written and performed the soundtracks for various films, including Vicinato 2 and the films of Sarah Morris. Beginning at art school in the 1980s the artist has also produced a series of eclectic films and videos which often highlight the conceptual issues at the heart of his work.

While the films and videos have been seen in exhibition contexts before, this is the first time so many have been brought together in one exhibition.

Three main structural components make up the exhibition. On entering the gallery an audiophile hi-fi system stands on sheets of coloured Plexiglas. This work, titled “David (Soundtracks)”, 1999, was originally exhibited at the Frankfurter Kunstverein as part of a solo exhibition in 1999. The system exists as a vehicle on which to play various soundtracks, compositions and fragments by the artist. Some have been deployed as soundtracks and others have operated as signals and interruptions. A short selection of hundreds of compositions are programmed here.

The second element of the exhibition is a grand piano standing in the centre of the gallery. Black snow softly falls on the piano as it plays itself. This work “Factories in the Snow (Il Tempo Del Postino)” 1997 was originally part of the theatrically based exhibition “Il Tempo del Postino” and part of the first Manchester International Festival in 2007. An adapted form of the work was subsequently included in Philippe Parreno’s exhibition “Anywhere Anywhere out of the World” at the Palais de Tokyo in 2013. The piano is a Disklavier. It is playing the artist’s attempt to recall from memory the Portuguese revolutionary song “Grândola, Vila Morena” written by Zeca Afonso. During “Il Tempo Postino” the work played during breaks in the progress of the event. The longer the piano played the more likely it might be to recognise the song - which was played to signal the beginning of the Portuguese “Carnation Revolution” in 1974.

The third element of the exhibition is a series of films and videos from 1994 to the present. This program includes collaborative works with Angela Bulloch and Anton Vidokle and the artist’s recent film about influential British artist, Richard Hamilton. Other films and videos include Margin Time and The Heavenly Lagoon, films which address new forms of mediation and contemporary production processes.

Two wall texts frame the exhibition. One is taken from the 1999 exhibition at the Frankfurter Kunstverein and relates a joke about Stanley Kubrick and Steven Spielberg. The artist grew up near to Kubrick’s home and his father worked for the company that provided the metal to build the space station set in the film 2001.

The second text is from the never to be published manuscript “Construction of One” aka “Construccion de Uno” (2005 onwards), a dystopian story that follows a group of workers as they reoccupy a former factory and attempt to completely resolve all relations of production and consumption.

Manchester International Festival, 2017: NEW ORDER + LIAM GILLICK: SO IT GOES...
In Summer 2017 one of Britain’s most iconic bands, New Order, will take over Stage 1 of Manchester’s Old Granada Studios for a very special series of intimate performances created in collaboration with Liam Gillick. This MIF world premiere will see New Order deconstructing, rethinking and rebuilding a wealth of material from across their career for audiences of just 1200 a night. Inspired by this reinvention of the band’s catalogue, Liam Gillick will be transforming the historic space at Old Granada Studios into an immersive environment, creating a stage set that responds dynamically to the music.
www.presenhuber.com