Ketchup As A Vegetable 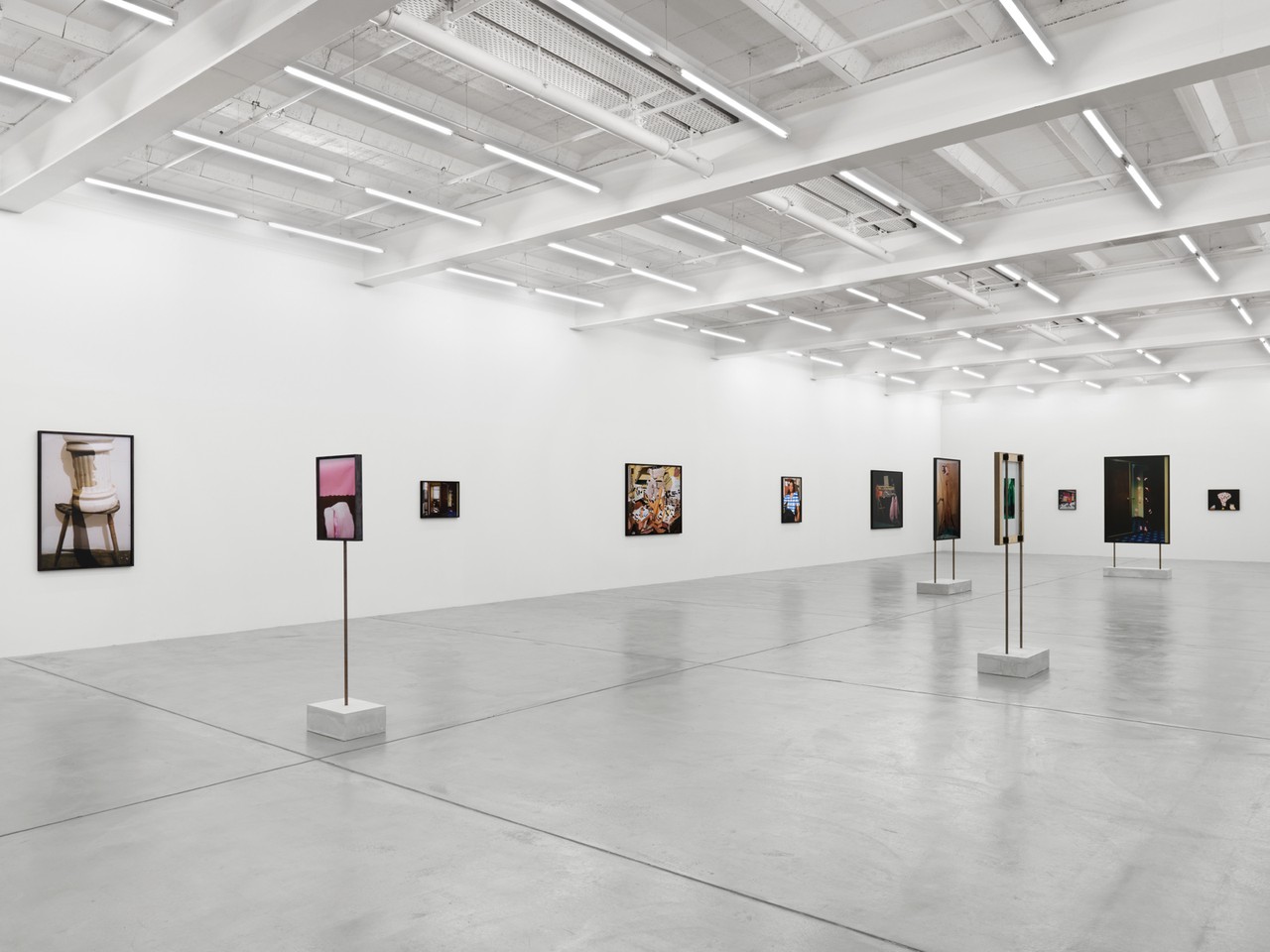 Galerie Eva Presenhuber is pleased to present the first solo-exhibition with the American Artist Lucas Blalock.

Blalock makes darkly comic photographs that probe discomfiting corners of the psyche, while thumbing his nose at staid photographic norms. His pictures are purposely awkward, ham-fisted, and jury-rigged, constructed with cutting-edge imaging software that normally fades into the background of slick post-processed advertising, but which he thrusts center stage. Anyone with a rudimentary working knowledge of Photoshop can understand the methods Blalock employs--a jittery fuzz of clone stamping here, an irregular bit of masking there. He has no tricks up his sleeves. But this feeling that we can see the gears of the image turning is precisely Blalock's goal.

Inspired by Bertolt Brecht's famous German playwright "distancing effect" (Verfremdungseffekt), for which he employed various methods of theatrical illusion-breaking to prevent his audiences from becoming enraptured with the emotive or narrative aspects of his plays and instead pique their critical faculties, Blalock's digital burlesques ask us to pay closer attention to the warp and weft of the ceaselessly unfurling tapestry of images that commands our daily attention. In keeping with this ethos, his images are also resolutely anti-heroic, taking the wind out of the sails of the various artistic genres that he marshals under his command. His still lives invariably feature dime-store tchotchkes and sundry lowlights from American consumer culture, giving them an air of the pathetic. His portraits transform his sitters into cartoonish, loopy stick-figures or scrambled, Cubistic freaks, more reflections of turbid emotional states than representations of people in the world. When he ventures out into the streets, buildings appear cobbled together and ill-conceived, a disappointment.

This show takes its title: "Ketchup as a Vegetable", from the swirl of controversy stirred up by a proposed piece of Reagan-era legislation that sought to cut spending on lunches in public schools in the United States. Under the proposed legislation, the Food and Nutrition Service (the governmental organization responsible for the school lunch program) was given a new leeway when it came to meeting nutritional requirements, which allowed certain condiments to be designated as vegetables. This bald-faced absurdity, which was pounced upon by Reagan's Democratic opponents, lead to the swift scuppering of the legislation. (Current regulations allow two tablespoons of tomato paste to be considered as a serving of vegetables. Attempts to change these regulations in 2011 were blocked with the help of lobbyists from large food corporations. Proponents of the regulatory change lamented that fact that striking down the proposed legislation was tantamount to declaring pizza to be a vegetable.)

The allusion to these ridiculous governmental machinations subtlety inflects the reading of the show. It points not only to the fraught climate of contemporary American politics, in which undercutting the well-being of the populace in the service of monied interests is the norm, but also to America's deeply sad inability to provide nourishment of all kinds, be it physical, psychic or spiritual, both to its own populace and to the people of the world who have adopted its culture as their own, or had it foisted upon them. The cheap, grubby objects that populate Blalock's still lives, and the hopeless discombobulation of his portrait subjects seem a logical extension of a world in which a sugary paste can be transubstantiated into a tomato, by way of the blessing capital.

Though Blalock's work draws on energy from both of these theoretical and political impulses, its central dynamo is undoubtably the unconscious. His pictures are increasingly tinged with the strangeness of dreams and visions, populated with creeping shadows and disembodied spirits, throbbing with psychosexual anxiety and gleeful prurience. This surreal, unconscious aspect has always been a part of his work, but for this exhibition he has made it doubly explicit: Hidden away on the back of each work's frame is a small additional photograph, distinct from the larger work, but related in some oblique, free-associative manner which is difficult to parse. It is as if the show, born of the unconscious mind of its creator, has spawned an unconscious of its own.