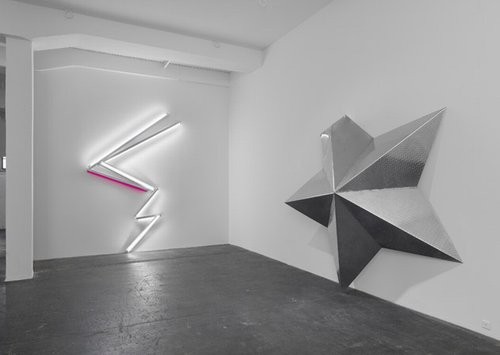 Galerie Eva Presenhuber is pleased to announce that its 2008 fall season is going to open with a solo exhibition by Miami-based British artist Mark Handforth (born 1969). The wider Zurich audience already had a good occasion to get to know this artist, with whom the gallery has been collaborating since 2003, in a solo show dedicated to him at the Kunsthaus in 2005. Another memorable appearance in Zurich was the oversize sculpture that he installed on the Tessinerplatz near the Enge railway station last year. For his latest exhibition, Mark Handforth is at present producing a new group of works. On view will be new wall and floor sculptures, among which are neon works, a highly polished aluminum wall star, a “smoking” sign and monumental bronze and painted steel sculptures that may be installed both indoors and outdoors.

Although his sculptures are in principle autonomous works, the artist will be assembling them, for the duration of the exhibition, to form an allusive semantic ensemble. The starting point for Galerie Eva Presenhuber’s current show is a reworked excerpt from the New York Times Book Review. It shows Allen Ginsberg, in front of Indian scenery, as he holds his hand out to a monkey. The background displays an evocatively placed colorful cloud of smoke. In the greater context of the exhibition, the cloud finds its echo in things such as a candlewick or a smoking sign.

Mark Handforth’s work is still centered around the sculptural vocabulary of urban areas and
familiar elements of day-to-day life (traffic signs, street lamps, motor scooters, truck wheels, hydrants, neon tubes, or candles). He adapts them by either remodeling them or by replicating them on an often considerably larger scale – which, in many cases, creates uncertainty as to whether the pieces are ready-mades or not. Yet this is, as a matter of fact, irrelevant: Handforth doesn’t pursue any documentary interests; rather than wanting to reproduce reality, he arranges familiar everyday elements in such a way that they create new points of reference. In this regard, allusions to literature and society are given the same consideration as art-historical implications.

Take, for instance, Mark Handforth’s wall installations made up of neon tubes, which are inevitably reminiscent of Dan Flavin. Contrary to the latter, however, Handforth doesn’t use
illuminants merely to add formal accents to an architectural situation; instead, he incorporates them into a figurative context. It is thus not without good reason that the neon-tube moon to be shown at Galerie Eva Presenhuber makes use of a simple, pithy visual idiom. Mark Handforth deliberately aims at blending Minimal and Pop Art. Time and again, one has to think of Claes Oldenburg. Handforth’s art, although being firmly rooted in the history of art, consistently draws its potential for friction from reflecting on today’s reality.

This true-to-life approach does not only work in a material sense, but also on a linguistic and visual level. Now and then – especially in his traffic and prohibiting signs –, existential motifs emerge, too. Handforth’s art may focus on the world of things, but it’s the human being to which it points in the end. Hence, many of his sculptural objects carry inherent traces of their own failure, by which they refer to a transience that goes to the heart of the matter. A particularly striking example is the battered star whose shiny silver suggestively evokes the speed intoxication experienced on a highway. It creates a beautiful image of a finitude from which none of us will escape. As the artist puts it: “Vanitas means to find death in those things that cannot die”. Despite its sometimes sober appearance, Mark Handforth’s oeuvre is infused with a fine sense of melancholy.
www.presenhuber.com