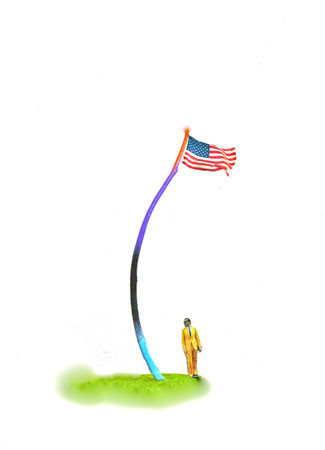 Mark Handforth is a familiar name in the Zurich art scene, thanks not only to his previous exhibitions at Galerie Eva Presenhuber in 2006 and 2008, but also to his 2005 solo exhibition at the Kunsthaus. In 2007 he caused something of a sensation in Zurich when he installed a large-format sculpture made from welded chain links on Tessiner Platz at the city’s Enge railway station.

In his third show at Galerie Eva Presenhuber, Mark Handforth broadens his formal scope with new sculptures that incorporate organic shapes rather than referring to urban living spaces.
Cast in aluminum, the eponymous two bananas lean against each other. The viewers actively become part of the work, their bodies dwarfed by the sheer magnitude⎯over three meters high⎯of the shimmering metal fruit. A pair of cashew nuts locked together in a close embrace also manipulates our perception, for the bronze Love Nuts bring to mind two indefinable primitive organisms caught in the act of reproducing whatever their species might be. Meanwhile the bronze cast of SEAL shows the last step of a transformational process from an actual seal to a pocket-size rubber toy (which provided the model for the cast) to a work of art whose dimensions, material, and position register a radical shift away from the original.
Handforth’s deliberately minimalist range of materials—he mainly uses industrially produced metal and neon tubes—is supplemented in this exhibition by lighting from lightbulbs and daylight. Whereas three-dimensional neon works such as Eclipse (shown in 2003 at Consortium, Dijon) or Western Sun (shown in 2004 at the Whitney Biennial) clearly reference Minimal Art and artists like Dan Flavin, his work The Library presents a new take on the visual arts’ age-old exploration of light and shadow: a wire mesh cylinder that contains a glowing lightbulb hangs from a gallows-like geometric sculpture made of aluminum joists. The streetlamp, a frequent ready-made motif in Handforth’s works, is transformed into a more or less domestic DIY object shedding light, so to speak, on the issues and formal vocabularies central to art history.
Handforth’s wall piece Caviar Phone provides a contrast to the solid mass of the sculptures by incorporating the architecture of the exhibition space. Holes drilled directly into the longitudinal wall of the gallery and painted with spray paint and ink form a three-meter high telephone receiver. Further holes spreading away from the receiver across the entire wall suggest a process of dissolution. As the holes are lit by daylight, the sculpture ceases to exist once evening falls. Glimpses of the outside world and everyday life that are visible through the holes draw attention to the boundaries of the exhibition space while at the same time challenging the notion of the sculpture as a tangible object and augmenting the visibility of the artistic intervention in situ.

Mark Handforth refers to late twentieth-century art movements such as Minimal Art and Pop Art as languages that he has learned to speak, and he is grateful to be able to switch between several languages in one and the same sentence. In this sense, this exhibition, in which autonomous sculptures enter into a dialogue with one another, reveals Handforth as an eloquent multilingual voice-artist who narrates our own history within an artistic context.