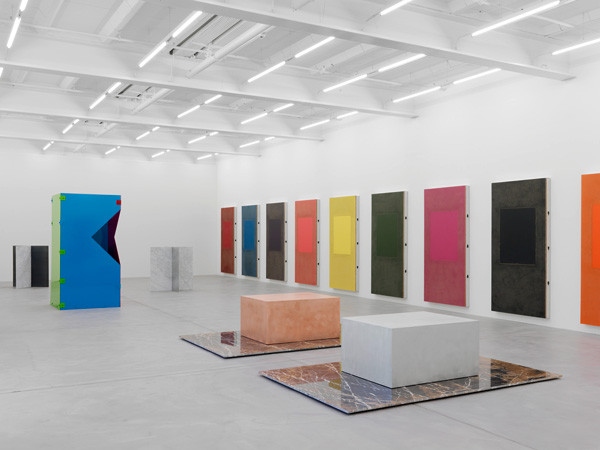 Sam Falls has long pursued a particular interest in the influence of natural phenomenon such as light, rain or time and wind may have on his abstract paintings and sculptures. The idea of a sublime deterioration, a controlled and expected change on materials ranging from steel to cloth and others, creates a work that forces the viewer to consider not only the final image of it, but most importantly the process of its change. His oeuvre spans an incredible array of mediums and techniques whilst maintaining a stylistic coherence.

Falls will present different bodies of work starting with a series referred to as „Walls“. As mentioned by the artist, his goal is to create works that have „formed over time, rather than captured in an instant“.
Another series on display is the colorful sculptures, coated on one side with UV-protected pigment and on the other side with non-UV-protected pigment. The sculpture, meant to be outdoors, will evolve according to its location, the elements and the light it is exposed to. A similar process of exposure to the sun is applied to the drywalls, placed outdoors, with their matching photographs taken from the artist’s window on top of them, they absorb the sun and dust creating a striking contrast. Early in his career, Falls mastered the techniques related to large-format photography and the notion of "the photographic" has remained a conceptual motor for much of his work.
The exhibition will feature new sculptures made of marble and copper embedded in a tradition of Minimalism from Donald Judd to Frank Stella.

Sam Falls follows a new tradition of Minimalism and Land art, whilst pursuing a quest towards abstraction, including new elements and techniques in revolutionary ways. The aesthetics of his oeuvre have undoubtedly been influenced by a Los Angeles environment yet his works carry a poetry and an immediacy rarely found in abstraction.
www.presenhuber.com