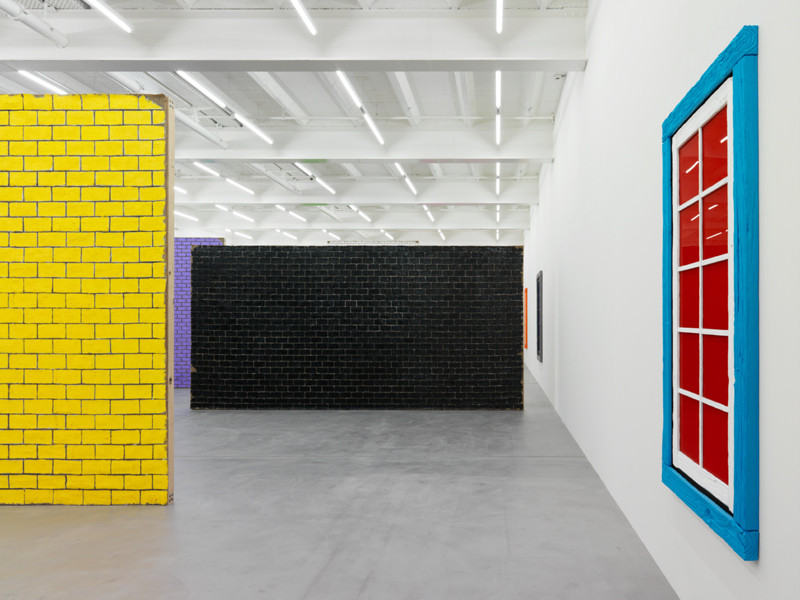 How do you make a place for yourself in the world? And how, at the same time, do you keep the world at bay? The tide will continually rise or fall, at times precariously. And with it you remain buoyant, or vulnerable. You find ways to protect yourself, you build walls. The walls represent stability, the outer, more formidable layer of our skin. When you inhabit a room long enough, you come to see it as an extension of your own body. To let others inside or come close is rarely without hesitation. Whose windows and doors are always left wide open?

For some, art is a way of making a place in the world. And not only, for that place can be thought of in terms of memory and a free floating dislocation.

How do you reconcile the past, account for its traces? Without being held hostage by them, devoted to their maintenance? Rooms left behind, if they mean anything, stay with us. And an empty room, is there any such thing? Every room is inhabited by all who have been there, by those who leave an impression. What occurred there, nearly as visible as contours imprinted on the other side of a bed. What one represents, even in the seemingly abstract, is a longing. For what was, for what might have been, or will be. A particular reality, the illusion of itstruthfulness not easily shaken.

An invented world can be a place of wonder, as in childhood. Children forever curious about what’s behind the door, pressing their faces to the window, hiding behind the wall. The play of hide-and-seek, doesn’t it relate to art? Clues, laid out like stepping stones in front of a sleepwalker. Following them, the sleeper dreams vividly in color, eyes wide open.

We enter the exhibition of Ugo Rondinone.

As he has so many times before, the artist transforms a room which is not a room, a gallery, a space of claimed neutrality, a white box that awaits its animation. The same can be said of a studio. There are nine free-standing walls. These are paintings that refer to his former studio in New York. Upon moving into the space, Rondinone covered the walls with burlap, and painted them with rows of bricks in various shades of white, as if building a wall, surrounding himself, enveloping himself within. When he moved his studio uptown three years ago, he took them with him and began to repaint them, employing the color spectrum. Just as a wall is a kind of skin, so too is the canvas, and in this case the material of the paintings is oil on burlap, oil that seeps into its pores. In the artist’s remark—“My father was a bricklayer, my mother was a seamstress”—we understand that art can sometimes offer a mode of autobiography. The references to the parental activities are shown in the laying of bricks in tidy rows on one side of the painting and the sewing of burlap pieces creating a patchwork on the other side. The symbol of the brick wall has been frequently used by Rondinone. For instance, the sculptural installation from 2006,nestingground, a large black plexiglass wall that forms an L-shaped corner, the implication of a room, inside and out. The outside shows a white brick wall pattern printed on the black plexiglass. The inside shows a cluster of photos pinned to the black tinted plywood wall. The photos show walls, stairs, windows and doors, which the artist took in Matera, the Italian village where his parents grew up.

It’s worth noting that since 1991 there are various video and sculpture works for which paneled wood walls or brickwalls serve as a symbol for isolation. For instance, one projection features a man, seen close-up and in profile, walking past a brick wall that fills the screen. He is in continuous motion yet never arrives anywhere. This video installation from 1999 is narratively titled, it’s late and the wind carries a faint sound as it moves through the trees. it could be anything. the jingling of little bells perhaps, or the tiny flickering out of tiny lives. i stroll down the sidewalk and close my eyes and open them and wait for my mind to go perfectly blank. like a room no one has ever entered, a room without any doors or windows. a place where nothing happens.

The studio, the place where art is born, has long been a subject for artists. Even to be absent in the picture, they foreground themselves in the activity with which they are occupied, reminding us that art is and isn’t conjured out of thin air. And here resides the palpable reality of its magic. We have, throughout the history of art, been allowed into this otherwise unseen place, offered a window onto this necessarily insular, private world. And yet these brick paintings do not replicate studio views, or evidence what goes on there, certainly not in the traditional sense of pictures within pictures. These are brick walls, rendered with paint in red, pink, orange, yellow, green, light and dark blue, black, and white. Impastoed, the paint has been applied with a brush nearly as wide as the brick, a familiar gesture, frosted as it were. There are times when the texture of life insists on being represented. Here, the artist is dealing with the thing itself, transformed. He is, in this sense, a re-maker of reality.

Other artists have created brick walls. Cady Noland dealt with this image in the early-to-mid ‘90s, with silkscreens on aluminum panels that were set on the floor, leaned against the wall. Somewhat naturalistic, they were printed with red ink, yet in their flatness, their lack of depth, they suggested, as her work so often does, a facade, a prop, a sign of containment and control. More recently, Kelley Walker has been producing “brick wall” paintings that engage with the circulation of images and how they are embedded within a system, its structure, the allegorical mortar with which it is held in place. For both Noland and Walker, information is always imprinted, always passes through a filter or screen.

Ugo Rondinone’s brick walls offer another sort of architecture, one that relates to the act of painting and, in their installation, to the poetics of space, to intimacy and isolation. The paintings are arranged in the gallery so that the viewer must wend his or her way through the room, a room which has now been overtaken by another. At first, viewers see these walls from the front, the picture plane. Up close the “bricks” are clearly composed of brushstrokes, with an artifice, a plastic quality that reinforces rather than undermines their physicality. In between the individual bricks, the “mortar” with which they are held together is raw burlap. Often, at the far left and right edges, and at the top and bottom of the painting, one can see the material clearly, its weave, as if an actual wall was chipped, weathered and worn over time. And yet there is no pretense to trompe l’oeil. Quite the opposite. These works are meant to be apprehended as paintings. Paint does not simply hover in space, but must be grounded. And one way to do so is by showing its components. From behind, the viewer can see the full expanse of bare, rough burlap, a material more readily associated with raw goods and manual labor than with a rarefied object and fine art. The back of a painting, an unvarnished surface normally hidden by the clean white gallery wall, now given equal prominence.

At the end of the space, further movement is impossible. One arrives at a massive, cartoonish door, resolutely sealed. Here, the artist’s comment—”My work is naive, childlike”—rings true. This is a door imagined from a fantastic tale of giants, perhaps from a bedtime story, their shuddering footsteps, and the resounding weight of a portal which thunders ominously shut behind them. This door, made manifest, rendered visible without any loss of irreality, is appropriately titled, lax low lullaby. On the way to and from this end-point, the viewer will pass a number of windows, though not in the usual sense framing an external view. They are not transparent. Instead, they reinforce the interiority of the space, its staging of enclosure. Windows and doors have served as symbols for longing and introspection in Rondinone’s work since the early ‘90s. The window frames in this exhibition are at once natural—seemingly wood hewn and rustic, referring directly to the windows in the artist’s farmhouse—and psychedelic. Painted in hues ranging from neutral to candy-colored, they contain, rather than panes of clear glass, opaque glass in purple, canary yellow, midnight blue, with titles like the abyss, the nonbeing, and the vacuum. They are reflective. We don’t look outward, but inward. As with the brick wall paintings and the sculpture of the door, these works position us in between spaces, as well as objects within space, that are simultaneously real and imagined. To have been dislocated in this way is not entirely unpleasant. All sorts of sensations, just as memories, may unexpectedly be roused. The painted brick walls, around which we may circulate and lose sight of one another at every turn, create a stage-set, rendering viewers as surrogate performers. This has been the artist’s engagement from the very beginning of his life in art, a narrative that loops back as this story continues to unfold.

In Ugo Rondinone’s exhibition, walls + windows + doors, we are reminded how the past is brought to life in the present, and how the here and now, actively inhabited, can be transformative. As we animate and reanimate people and places, as we elevate them in our minds, we make a place for ourselves in the world, and go on.

Bob Nickas
New York, Monday, May 18, 2015
On the occasion of the exhibition of Ugo Rondinone at Galerie Eva Presenhuber Zurich 2015
www.presenhuber.com