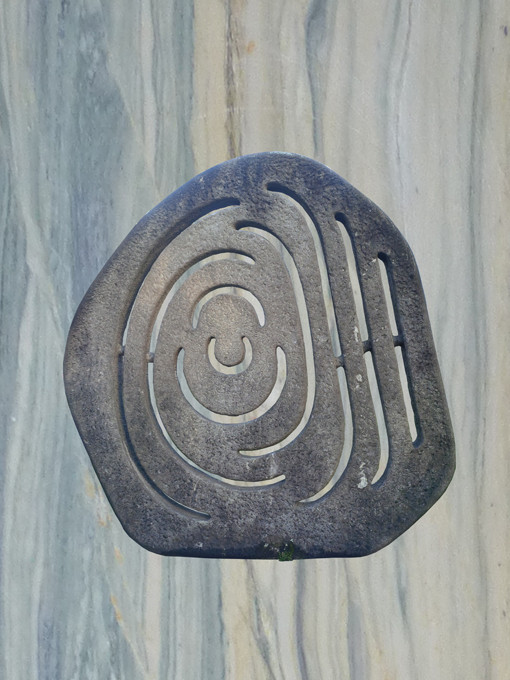 Ciaos
The Ciao is a model of moped 49.9 cm3 manufactured by the Italian producer Piaggio. Its production started for the first time in 1967 and ended in 2006. For nearly 40 years, Ciao has sold more than three and a half million copies: it is the best-selling Italian moped in the world.
Wikipedia

Ciaos of different colors and from different periods are spread out in a square of about eleven meters per eleven meters. They form two groups, one group of four and one group of two, the last ciao remaining on its own, like a dog.
A little over a hundred years after Marinetti’s Futurist Manifesto, and in particular point 4:
We declare that the splendor of the world has been enriched by a new beauty: the beauty of speed. A racing automobile with its bonnet adorned with great tubes like serpents with explosive breath ... a roaring motor car which seems to run on machine-gun fire, is more beautiful than the Victory of Samothrace.
I wanted to distance myself as far as possible from this proto-anarchist-punk ambition. I thought it was ironic as well as sad to present this “restored” moped, that displays neither power nor speed and which is actually the vehicle of two forms of marginality: the marginality of youth in its quest for evasion and emancipation as well as the marginality of dropout adults who populate the European countryside and villages.

Pastime in Gray, Green and Ivory White
A rectangular parallelepiped of 30x45x90 cm, made of blocks of Saillon cipolin marble incrusted in reinforced concrete, is itself incrusted in the lower extremity of the wall that divides the first third of the space from the rest of the gallery.
This marble has kindly been gifted to me by the “Friends of the Saillon Marble”, an association of pensioners, whose goal is to shed light on the glorious past of their village. Their statutes stipulate in point 4. To promote the artistic use of the marbles, thus I felt the necessity to take it upon myself. They spend their free time retrieving marble in demolished houses from the area, in orchards, in fields, or in the quarry itself, that they then transform into candle holders or ashtrays.
I have been assured that this marble is present in many key historical architectural buildings such as the Opera Garnier in Paris, the Müller Villa by Adolf Loos. It has been used to embellish the entrance columns of the main building of the Kunsthaus Zurich. This work allows me to appropriate myself this cyma, to ornament it and to play the Sunday mason. I also use this work as pivot between the first and the second space.

Some Grids
Twisted iron grids, painted mat black, around 250x265x2cm, are hung three centimeters away from the wall of the gallery, with bracing metal parts plated in gold. These grids have a real provenance, probably an old post office, but this no longer holds any relevance here. However, for more realism, I have complied with the two different thicknesses of those grids. I wanted to sabotage and undermine the intrinsic authority and mission of protection of these urban objects by redrawing them hesitantly nine times, sensitive and fragile. The blacksmith had to replicate these trembling traits on a 1/1 scale. The final result is a sort of minimal low reliefs, yet sentimental and affected.

The Harp II
A shape that I would call ovoid and massive, of about 30 x 250 x 250 cm, and whose two sides are curved from the outside to the inside, stands pitifully in the middle of the second space. A labyrinthine pattern made of nine curved lines of different lengths runs through its width. The sculpture is made of resin, structured and painted in such a way as to imitate a dirty granite. This work is a copy of a work sculpted in 1951 by Hans Aeschbacher, which is installed in the gardens nearby the University Hospital in Zurich. For me here, the copy plays the classical role of study and preservation. This monolith is in this instance is lightened of its weight in kilograms, of its weight in authentic value but also of a so-called primitive and creative energy. It is only an image.

Bench
A concrete sculpture, which takes the shape of a bench, assembled from three elements of 170 x 60 x 40 cm, is placed in front and to the right of the last wall. The bench has two textural qualities: one for its six feet that takes upon the codes of Brutalism and the second texture for the sit, created through the help of a matrix designed by the contemporary concrete industry, a bush hammered effect granite. At the beginning, I discovered this bench when I was measuring Die Harfe II and I was charmed by this “urban furniture” simple and elegant. I have appropriated it. I want to offer here a bench that not only has the role of its won representation, but also that plays the role of a bench, allowing the viewer, alone or as a group, to sit, to eat, to nap or to meditate.